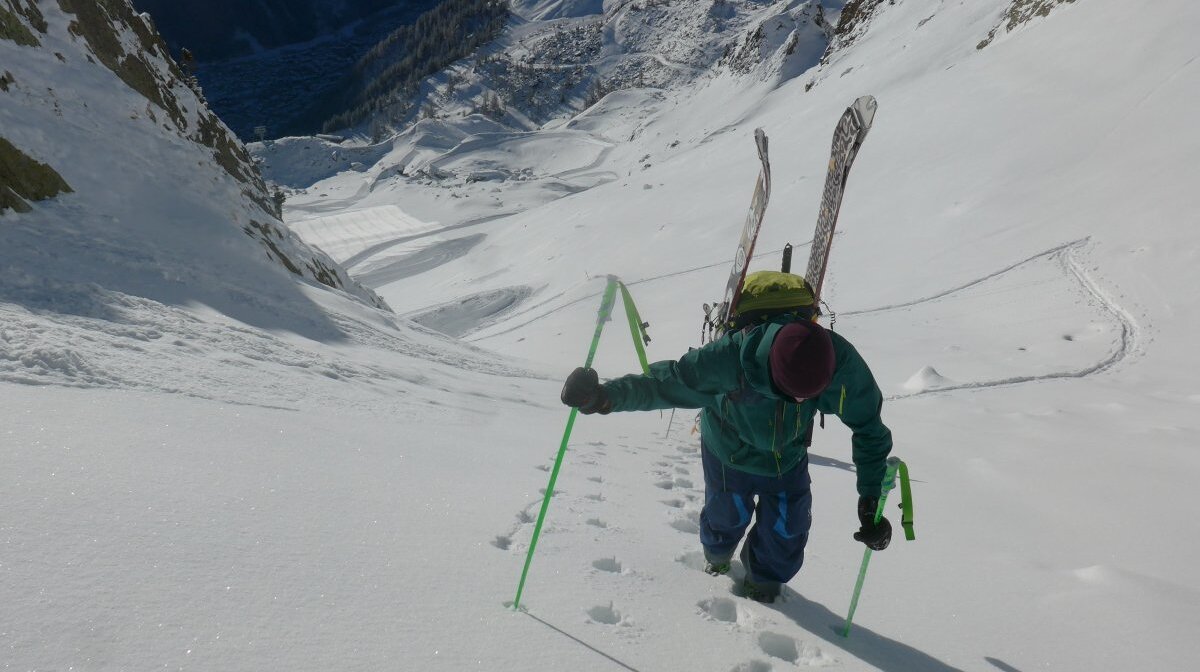 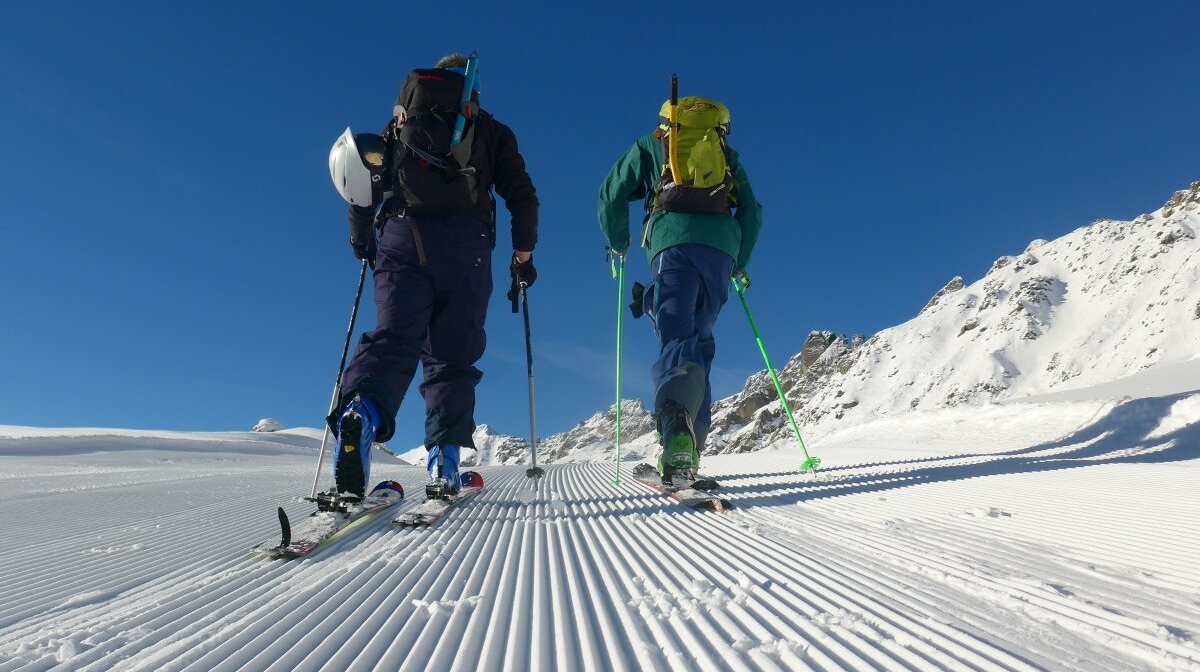 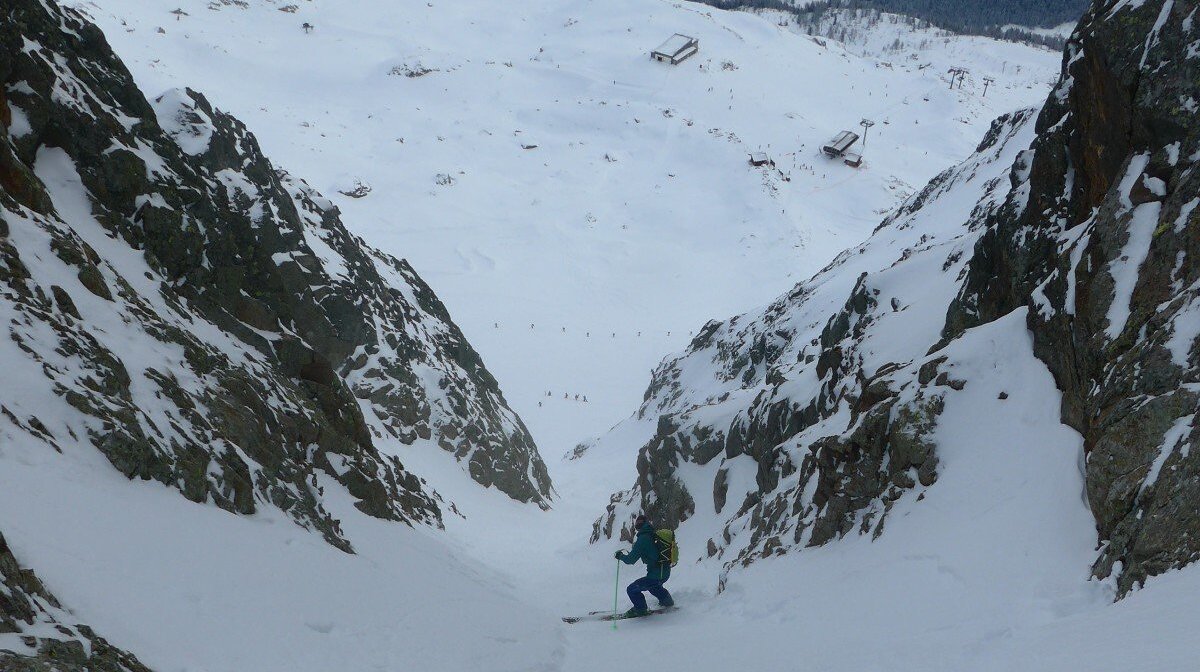 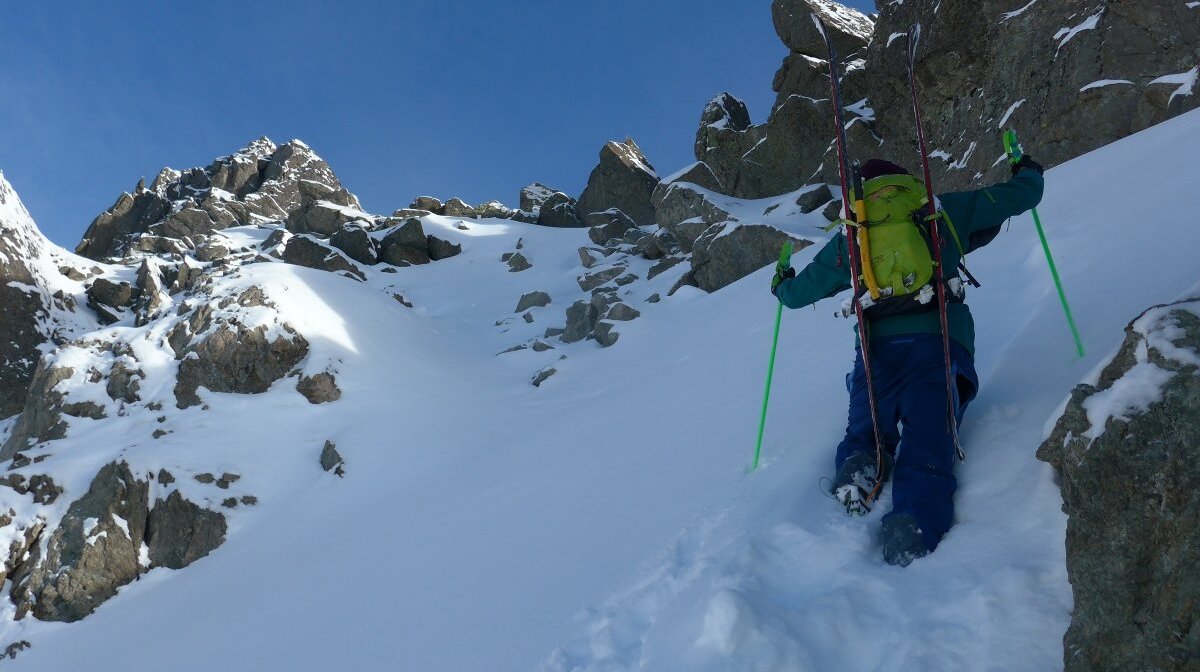 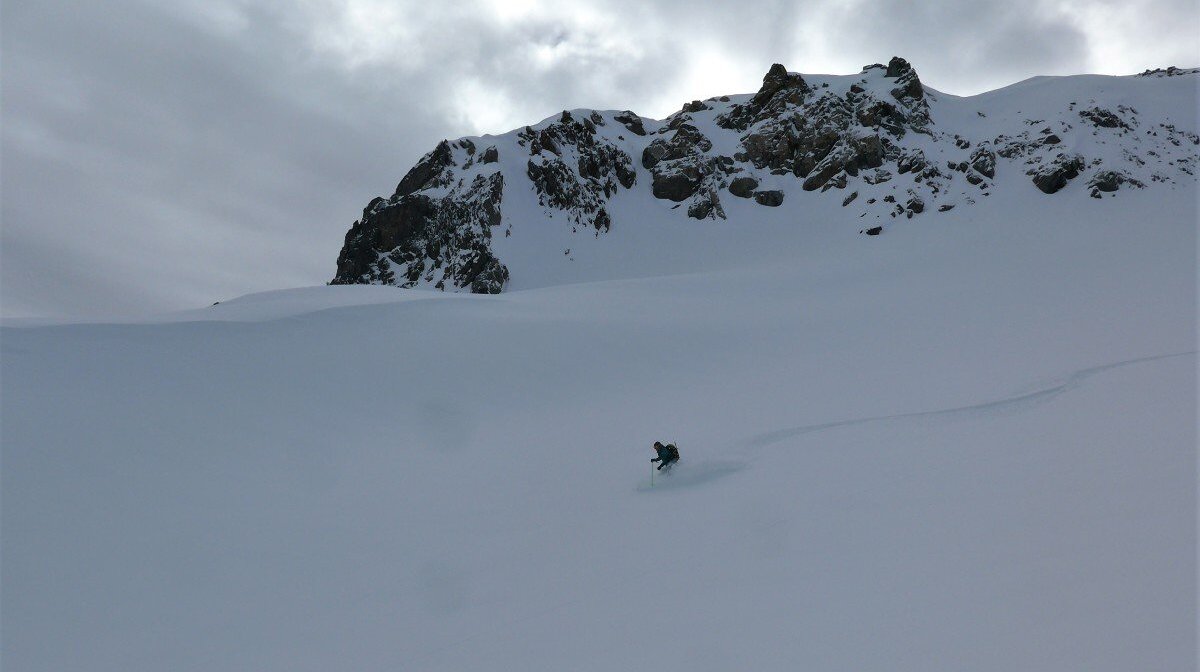 Fresh corduroy at the start of the day

The couloir as it starts to open up

The final steep climb to the Aiguille de la Gliere

It's been a slow start to winter in Chamonix, but (finally...) things are starting to look a bit more like winter. After a couple of small but useful snowfalls on the 7th and 10th January the old existing, and pretty darn firm, snow layer has received a cover of 20 to 40cm of light fresh snow (depending on where in the mountains you are).

This new snow has given a good surface to ski on, but because the new snow is very light it's easy to go through and hit the harder layer below, or worse, the hidden rocks... The avalanche forecast highlighted that the new snow could slide easily, but because it's so light there'd not be a huge risk from it. Either way, we still chose a fairly conservative route to climb the Aiguille de la Gliere.

Why the Aiguille de la Gliere? Well, we wanted to get away from the crowds, have a ski tour with several options should the snow not be what we hoped or the weather not be as forecast, and nobody likes waiting in lift queues. Guessing that most folk would head for Flegere or Grand Montets, we rocked up at Brevent and joined the 15 other people waiting for the lift to open. As we made our way to the Col du lac Cornu, just above the chairlift of same enough name, even those few people headed in other directions and we were left alone.

From the top of the Col Cornu chairlift a short skin and/or bootpack brings you to the Col du Lac Cornu. From here it's another 150m of bootpacking up to the summit of the Aiguille Pourrie and its short but fun north face. This was our back up plan should the weather forecast turn out to be a touch optimistic, but under blue skies and with no one in sight we kept the skis on and traversed round to the Col de la Gliere.

Up till now we'd had complete solitude however a group of guided skiers had climbed to the col from the Flegere lifts. There's plenty of snow for everyone about here though, so there was no stressing, and after a bit of a chat we continued breaking trail up towards the summit of the Aiguille de la Gliere.

The Lacs Noirs behind the Aiguille de la Gliere are among the less frequented bits of the Aiguille Rouge. I'm not complaining, it's a great feeling being out on perfect day with only your friends and no evidence of any other humans around you, but it seems a shame for folks to miss out on the amazing views from Mont Blanc, round over the Arve valley, across to the cliffs of the Fiz and then onto Switzerland in the distance.

The untouched descent down through the Combe du Pouce and into the Berard valley looked very, very tempting, but Rich had done the 45 minute walk out of the Berard valley to the town of Buet just a couple days before and wasn't in any great rush to do it again. Instead we put the skis back on the rucksacks and started the climb up the final few metres of the slope. When I say climb, I should probably say wade. The final slopes are quite steep and in firmer snow an ice axe and crampons would be needed for most people. We had the opposite problem of deep soft snow so kept to the rocks as best we could. An avalanche risk of two is still a risk!

From the ridge just below the Aiguille de la Gliere's true summit we were treated to views of the Dru, Verte and Grand Jorasses. We were also treated to the sight of the cloud rolling in and the busy Flegere ski area. After the last few hours of solitude and blue skies this was a bit of a surprise! The light was rapidly getting flatter, and the ski tourers below us rapidly getting closer, so we took off skins, added extra layers and clipped in for the descent.

The initial bowls off the Aiguille de la Gliere are fairly mellow (though still steep enough for us to trigger some shallow surface slides near the ridge), and gave some great turns in boot to knee deep powder, not something we've had much of a chance to do this season! With a deeper snow pack there's a variety of options for descending towards the Flegere ski area, but we don't have a deep snowpack just now, so we opted to take a narrow couloir that's held snow for the last couple of months. The advantages of local knowledge...

Initially the snow in the couloir was a little scraped, 3 skiers had been in before us, however once past the initial narrow section, it was possible to open up the turns and enjoy the snow more, made even deeper from the accumulations that had sluffed in off the cliffs on either side. As the couloir opened out into the wide slopes above the Index chairlift we swung left, keeping to the more shaded aspects, where the snow was perfect for faster, wider turns and surprisingly un-tracked.

The Floria drag lift is currently closed, but from where we stopped it was only five minutes walk up to the top. Although plenty of other skiers had had the same idea over the day, it still wasn't too tracked out and we managed to eke out another couple hundred metres of vertical in the powder before fear of hidden rocks drove us back to the piste and a cruise down to the Trappe chairlift.

Maybe not the most exciting day out touring, and not really the best ratio of height gain under our own power to un-tracked powder on descent, but it was still a good morning out away from the crowds and checking out the lie of the land before the next storm arrives.

Talking of snow storms, Friday, Saturday and potentially some of Sunday should see good snowfalls in the Chamonix valley. Amounts are difficult to predict as even 24 hours out the forecasting models are changing by large degrees, however anything from 30cm to over a metre at 2000m altitude is possible. Further out it looks increasingly likely that Italy will see heavy snow fall later next week, but there's plenty to enjoy before that arrives!