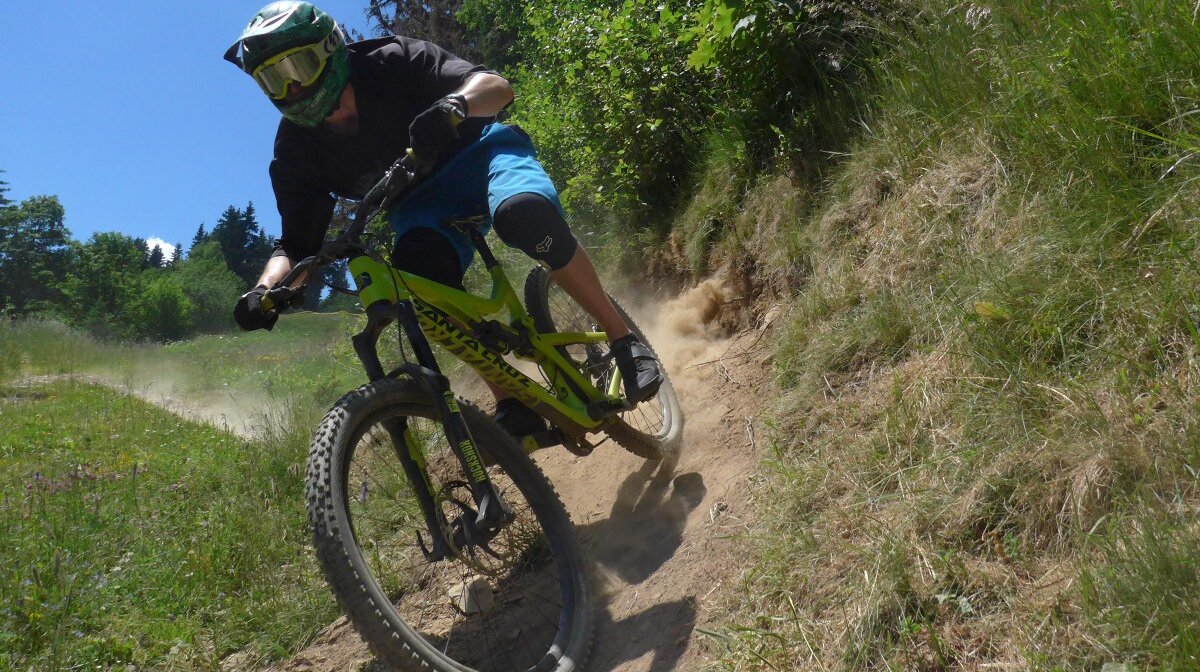 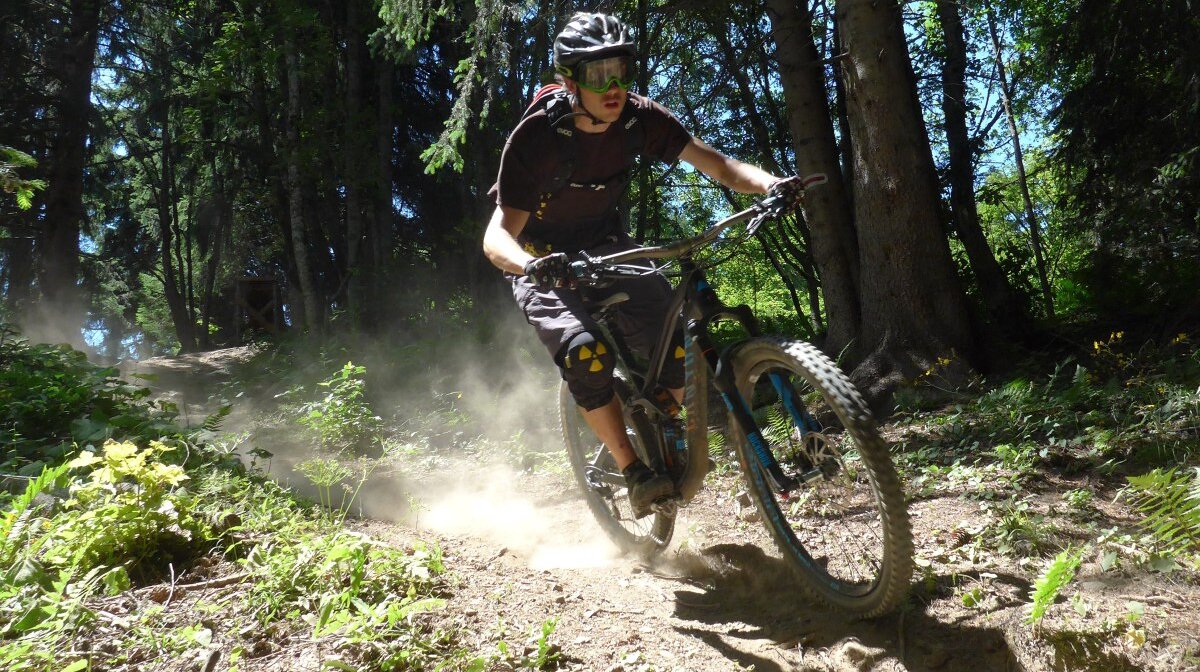 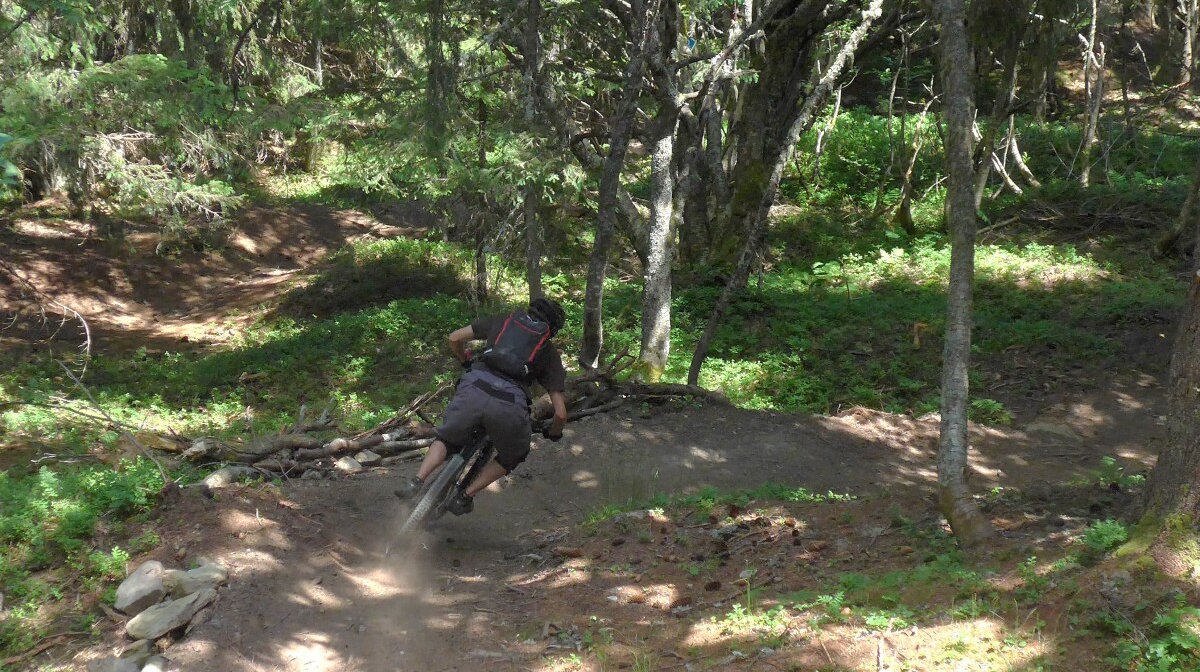 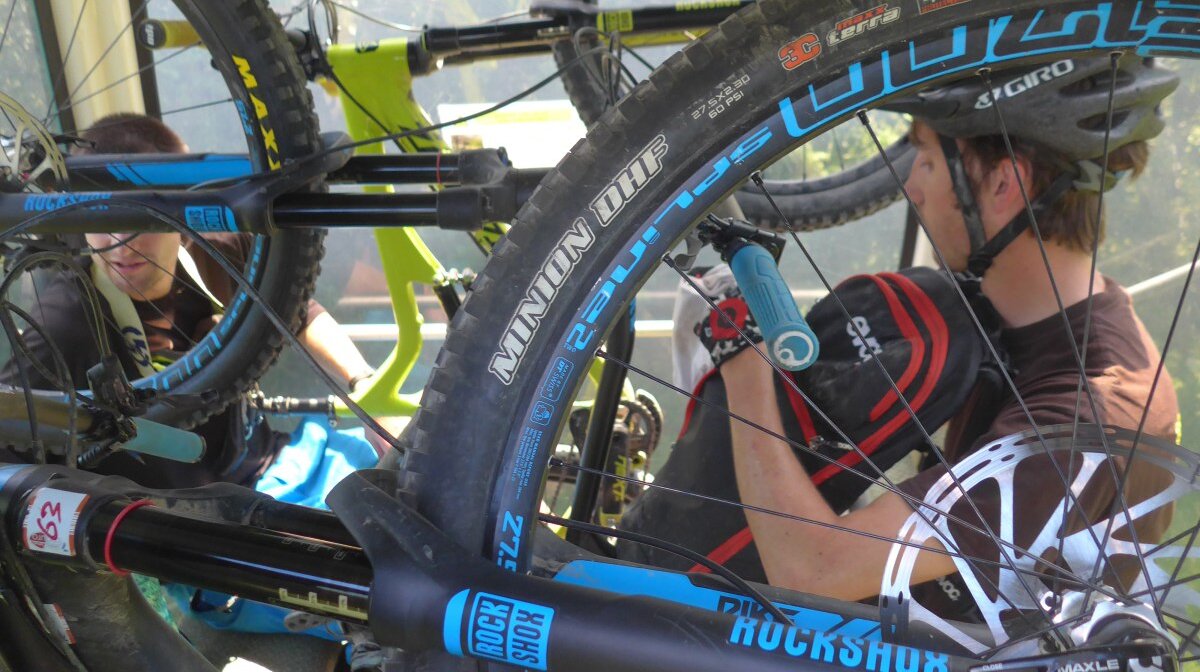 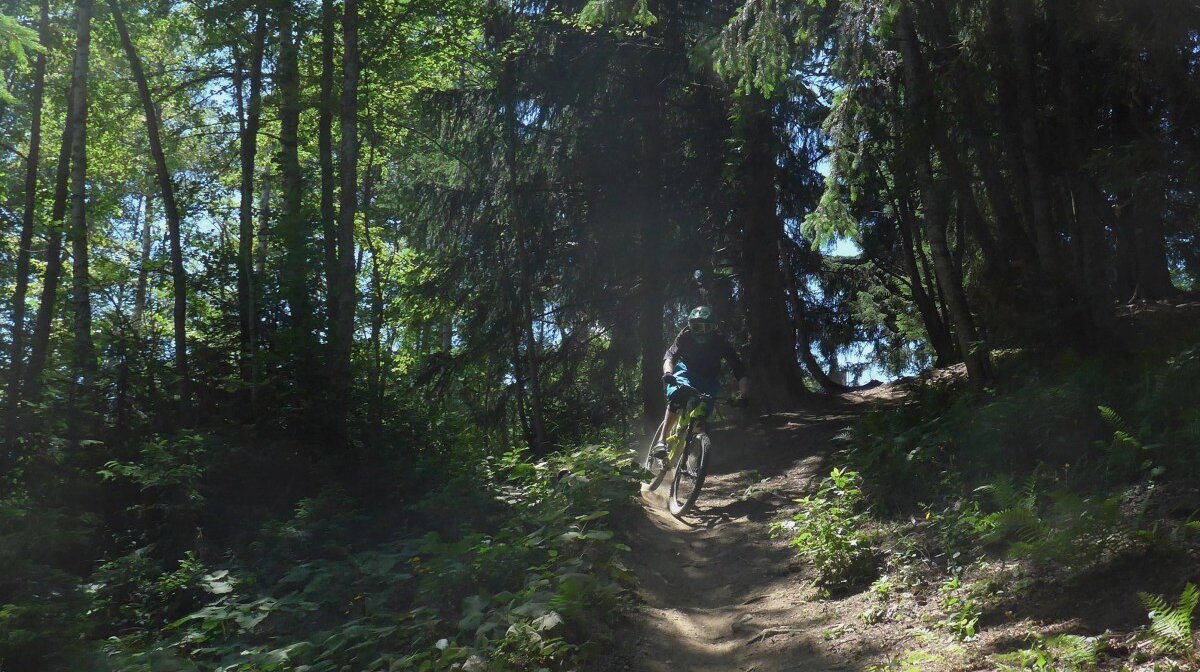 two mountain bikers looking at the view in les houches

a mountain biker on a trail in les houches

a mountain biker racing through the dust in chamonix

a mountain biker on a corner in les houches

a mountain biker on a trail in the trees in chamonix

Maybe you've not noticed, perhaps you've been hiding in a glacial cave for a few days, but it's pretty hot in Chamonix at the moment, going on for a heat wave even. White water rafting seems like the best sport to be doing right now, but if water's not your thing, how about a nice cooling breeze as you serenely coast down a hill on your bike?

OK so by the time you've dressed up like a storm trooper, downhill biking maybe isn't the coolest sport to be doing, but at least you don't need to pedal up the hill first.

The trails in Les Houches are usually the last ones to dry out in the valley so when everywhere else is inches deep in dust it's the best bet to get at least a little traction in the corners. Sure enough the course is currently riding as well as I've ever known it, with even the lower section, usually a mud bath, now more of a dust bath and running fast without leaving a speck of mud on the bike!

If you've not ridden the Les Houches DH track then it's well worth a visit. Starting from the Prarion gondola a short piece of 4x4 track brings you to the loose upper section, mostly above the tree line. Crossing the Stade piste you enter the trees. From here it's loose loam and roots (or mud and roots when it's wet) with occasional road crossings, berms and optional jumps, drops and northshore until you arrive at Maison Neuve and the road you follow for the last kilometre or so back to the lift.

Advanced riders aren't going to be challenged overly much, but as ever, just go faster until it's hard enough. For everyone else the modular nature of the track means you can ride top to bottom without being forced to get your wheels off the ground then, as you get more confident, take more and more of the red and black options that wind in and out of the main track. Some of these features are fairly big, with a good couple of metres of airtime.

As three Scotsmen out in the mid-day sun we were glad of the tree cover and rarely stopped outside of its shade. Fortunately all of the more interesting bits of the track where you want to stop and egg on mates are out of the sun.

Good as the main DH track is, you'll probably get a little bored if you just lap it all day. Lucky then that despite the July and August bike ban now being in action (mountain biking is forbidden on most walking trails for these two months) there's several other options for riders at Les Houches. The trails dropping off the back towards St Gervais, where the Chamonix bike ban doesn't cover, and returning via the Tramway du Mont Blanc or riding off the Bellevue gondola back towards the Col du Voza then down to Les Houches add lots of variety.

We only had a few hours though, so riding several quick laps of the main track was more than enough entertainment for us. Sliding about in the dust, which has much the same traction as mud when it's this deep, and bouncing about the root gardens until the heat got the best of us and it was time to run away and find something cool to drink.