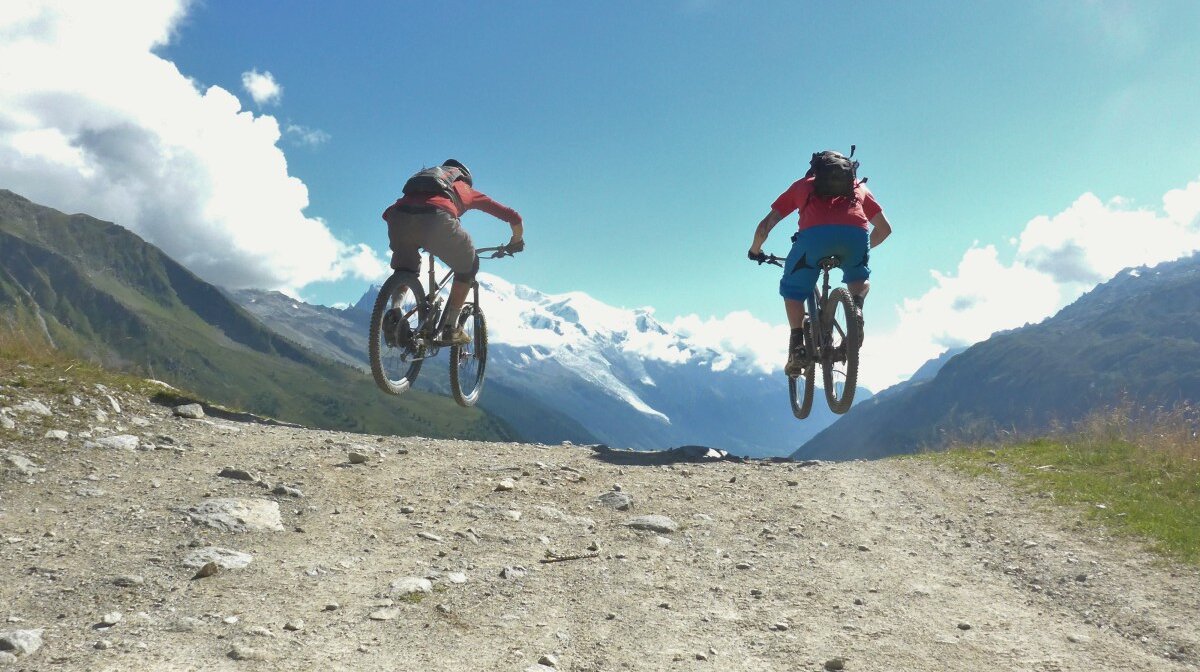 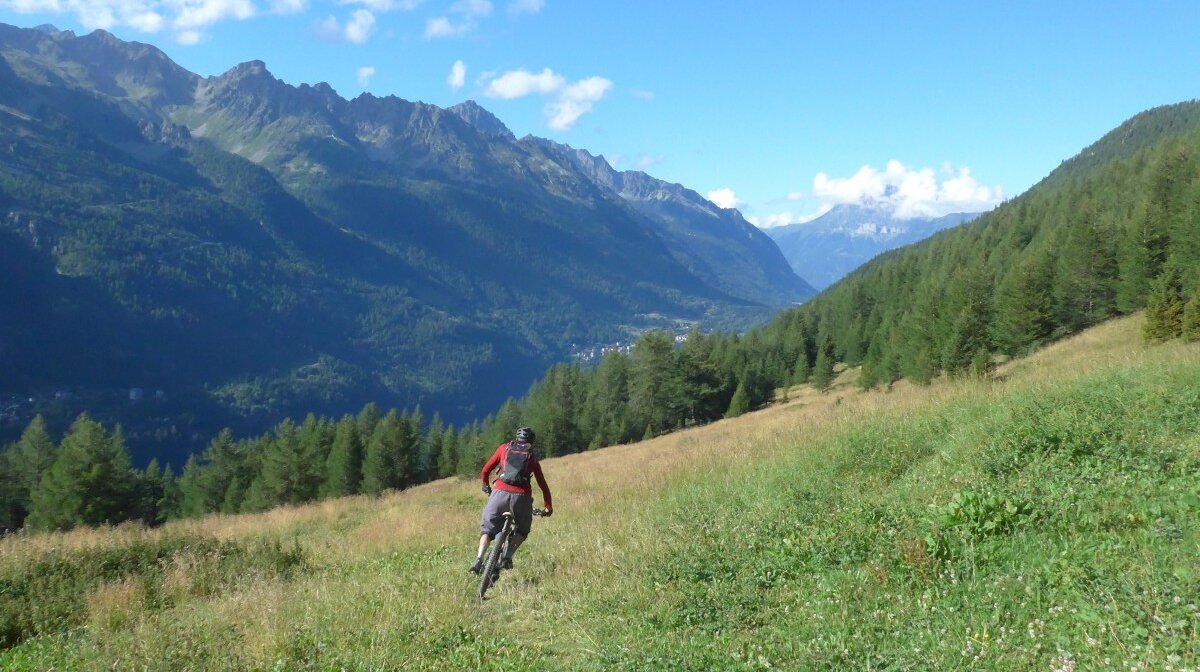 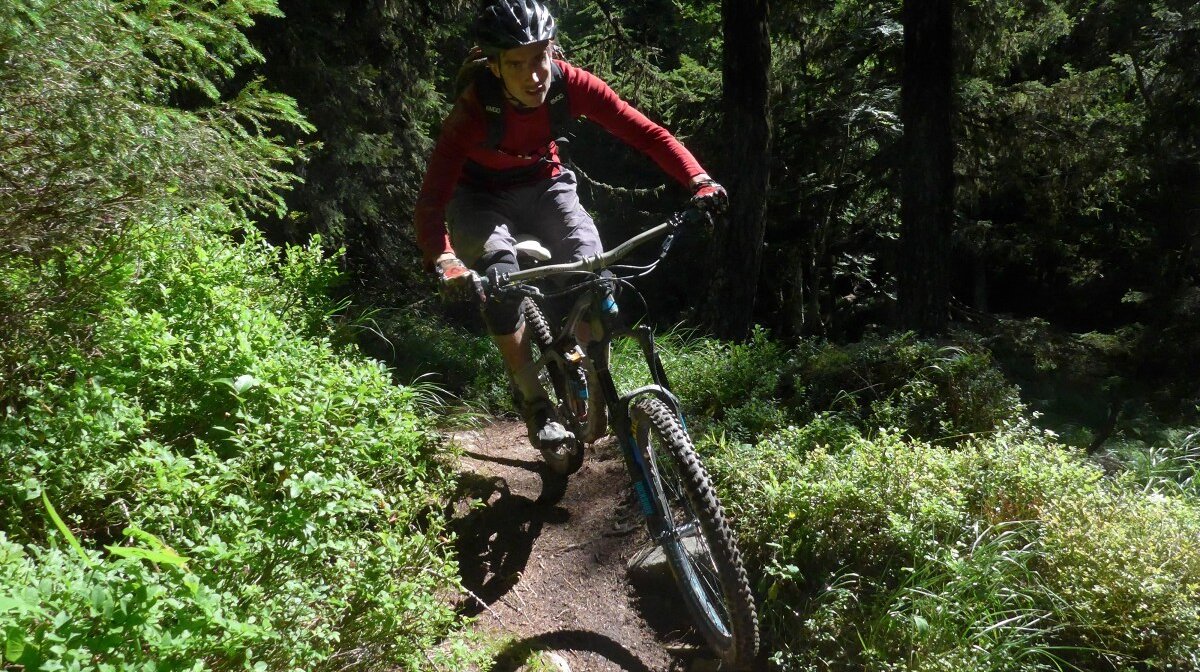 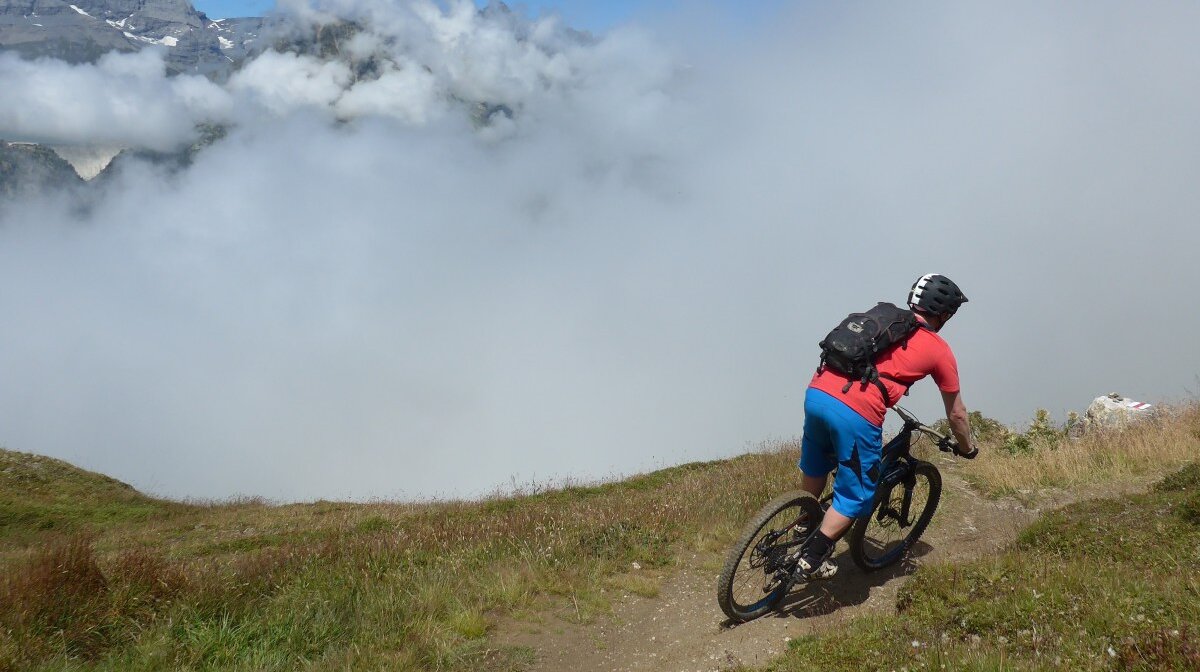 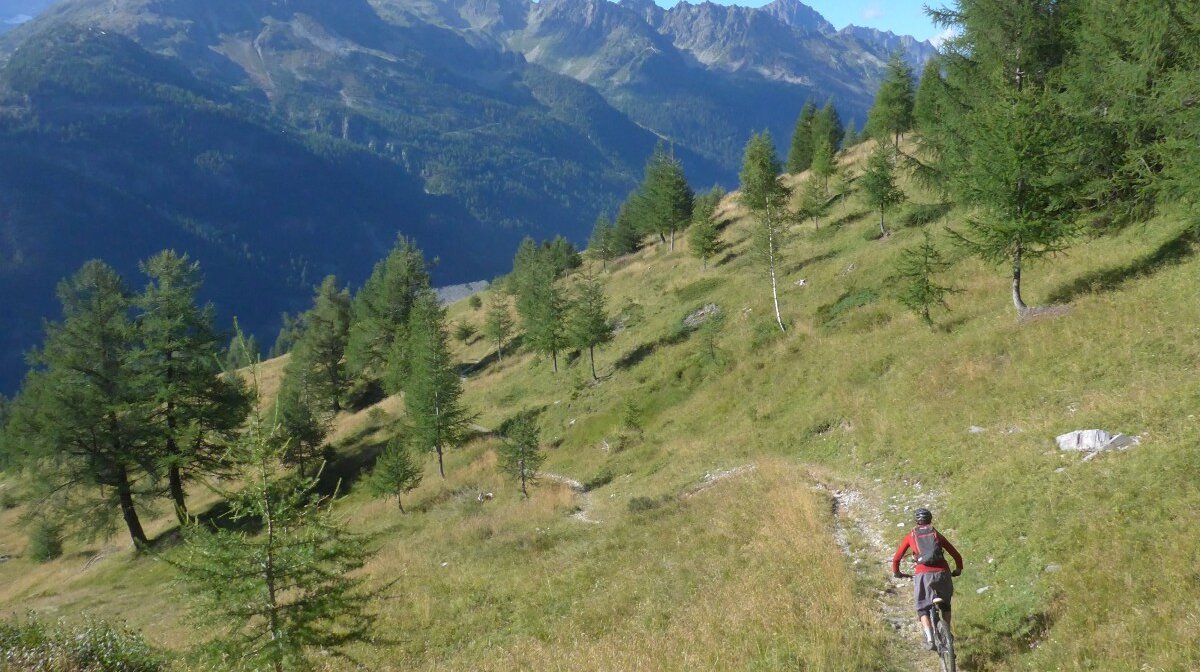 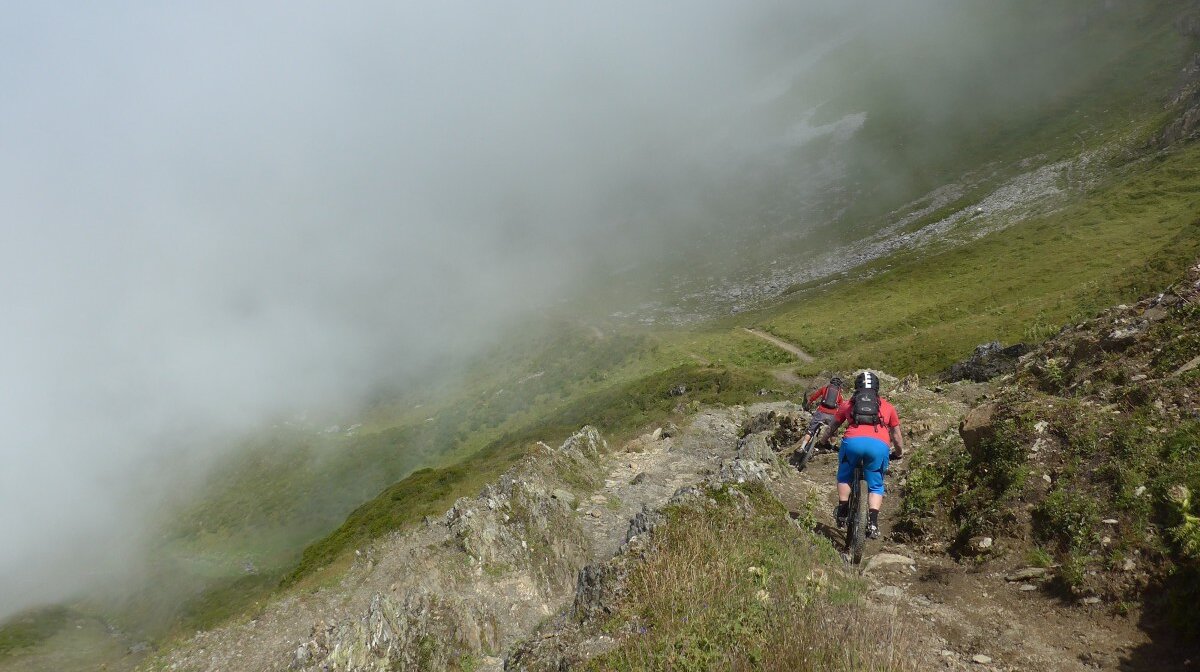 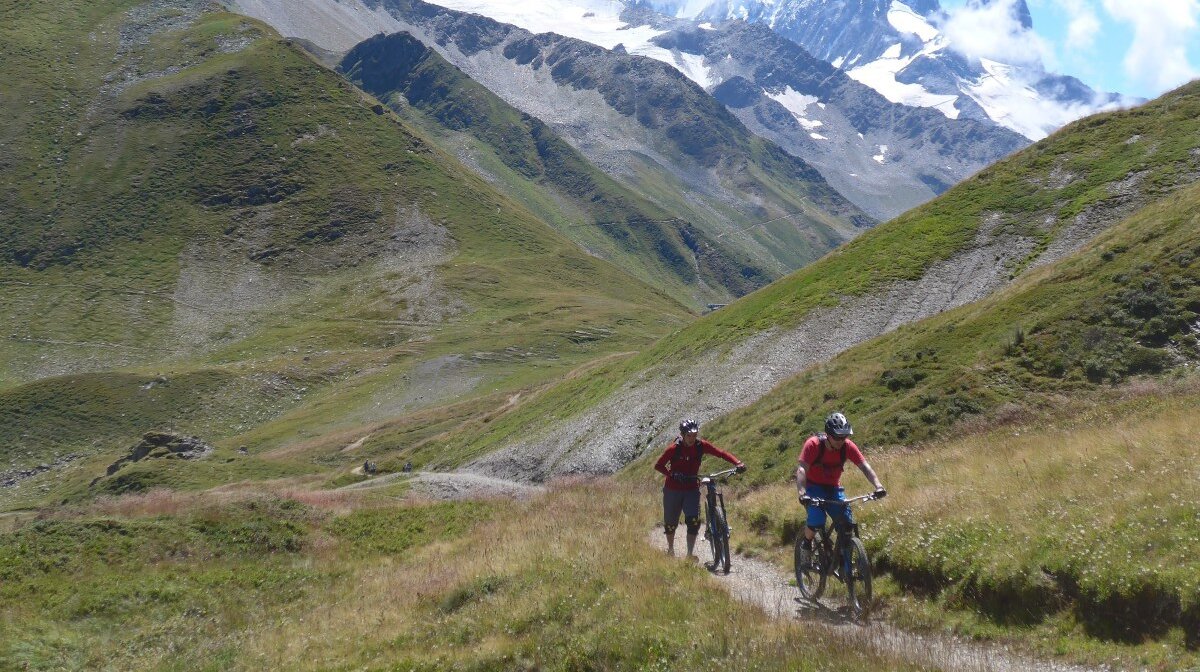 The long and winding road. Fortunately it mostly goes downhill

Over and Over. The Vallorcine DH is so good you don't want to stop lapping it

Above the clouds. Starting the descent towards Trient

The hills are alive with the sound of music. And bike tyres on the descent to Chatelard

Slip sliding away. It gets a wee bit loose and steep on the Trient trail

Running up that hill. Or pushing, the climb to Tete du Balme

After Saturdays downpour, Sunday promised dry and sunny weather. The Le Tour trails are the fastest drying in the valley so we headed up there.

The CosmoJazz festival also decided to head to Le Tour, as did lots of walkers, trail runners and other bikers. In short, it was a busy day up the hill.

As ever though, once away from the front of the mountain and riding the amazing trails into Switzerland, there was peace and quiet to be found. Having arrived a little later than expected due to the crowds and conscious that the Vallorcine Gondola takes a lunch break from 12:50 - 14:00 we started with a quick lap down to Vallorcine.

A short pedal up from the Autannes chair to the Col de Balme refuge, then another short pedal across the south flank of the Tete de Balme to below the Tete du Balme chair and we were ready to descend, down wide-open trails above the tree line, then increasingly tight and narrow singletrack as we entered the trees. When we reached the base of the Tete du Blame chair we could have pedalled up the hill for a few minutes to join the amazing Vallorcine DH track, but with 9 minutes until the lift closed we chose the fast option straight down the fireroad... To discover that the lift wasn't closing for lunch today! Never mind, back up the gondola, up the short pedal to the Col des Posettes then down to the Autannes chair for  another lap.

One of THE Chamonix classic trails is the ride down to Trient. Again starting from Autannes chair and riding round to the Col du Balme, except this time you need to get the legs working properly and pedal (or push, it's not a competition) up to the Croix de Fer. From here the views of Switzerland open up in front of you, or at least normally they do, for us the cloud was filling the valley, with the single trail dropping into the murk.

You can't describe a descent of this size or quality, there's far too much to take in, but it really is something special. Alas all good things come to an end and after the village of Trient, instead of sublime Swiss singletrack you have several kilometres of black tarmacadam. Obviously we took this chance to see who had the best tuck.

When in Rome, you make like the Romans. I have no idea what this means, but when in Vallorcine, you take a lap or two of the DH trail. The storms of this and last weekend have worn some pretty brutal water trenches through the middle of the upper sections making a hard trail even harder, but it's good to be challenged! Or at least, that's what we said as we repeatedly hit the ground.

Like Oliver and his soup, we wanted more. The DH track is fun, but natural singletrack seems to fill us up better. We'd descened to Trient, we'd descended to Vallorcine, so we thought "let's head to Chatelard". As on our first lap of the day we traversed round the Tete du Balme to descend to Catogne. Here we met the only other person of the descent, a trail runner out reconnoitring for the UTMB. He looked decidedly crestfallen when we broke the news to him that the course was actually several hundred metres below, but cheered up with the news that, like for us, it was downhill all the way from here.

It turns out no matter how much fun you're having, they still switch the lifts off. After pedalling back up from Chatelard to Vallorcine the gondola wasn't going anywhere and, having not eaten since breakfast, neither were we under our own power - it was time to head home.