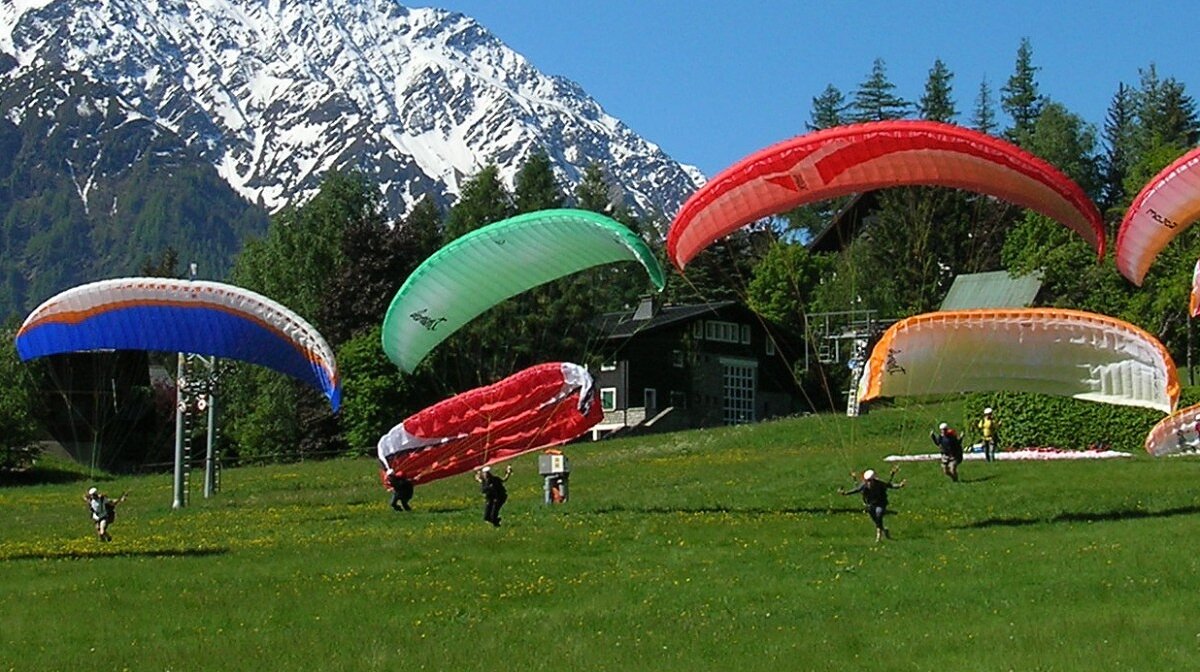 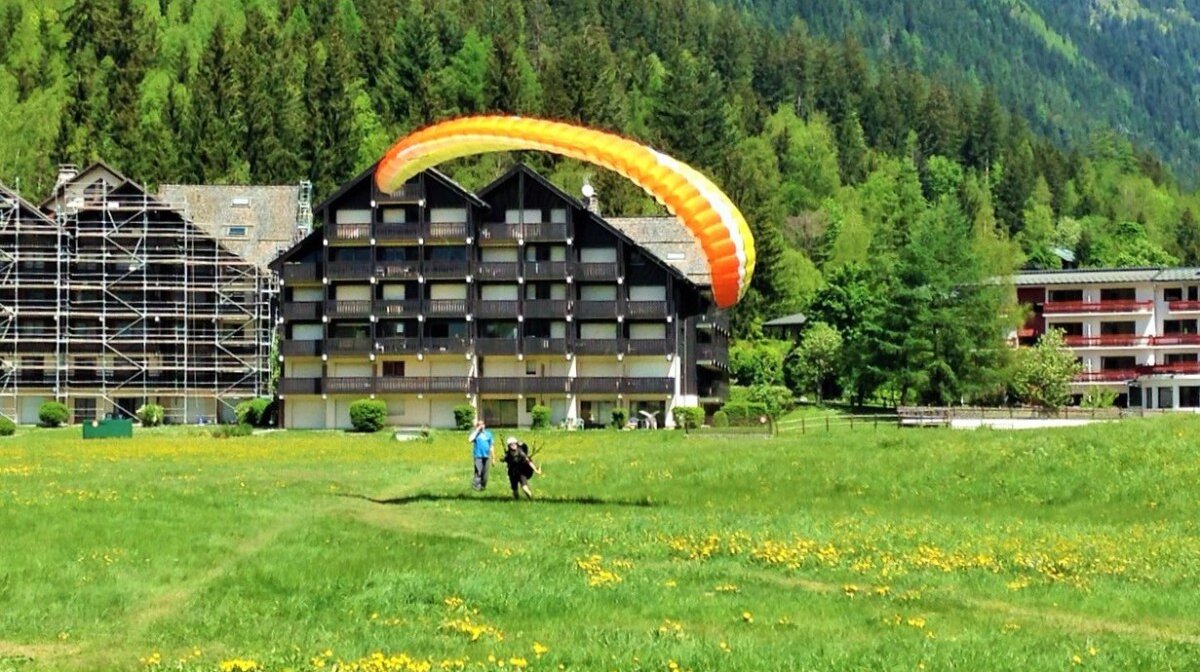 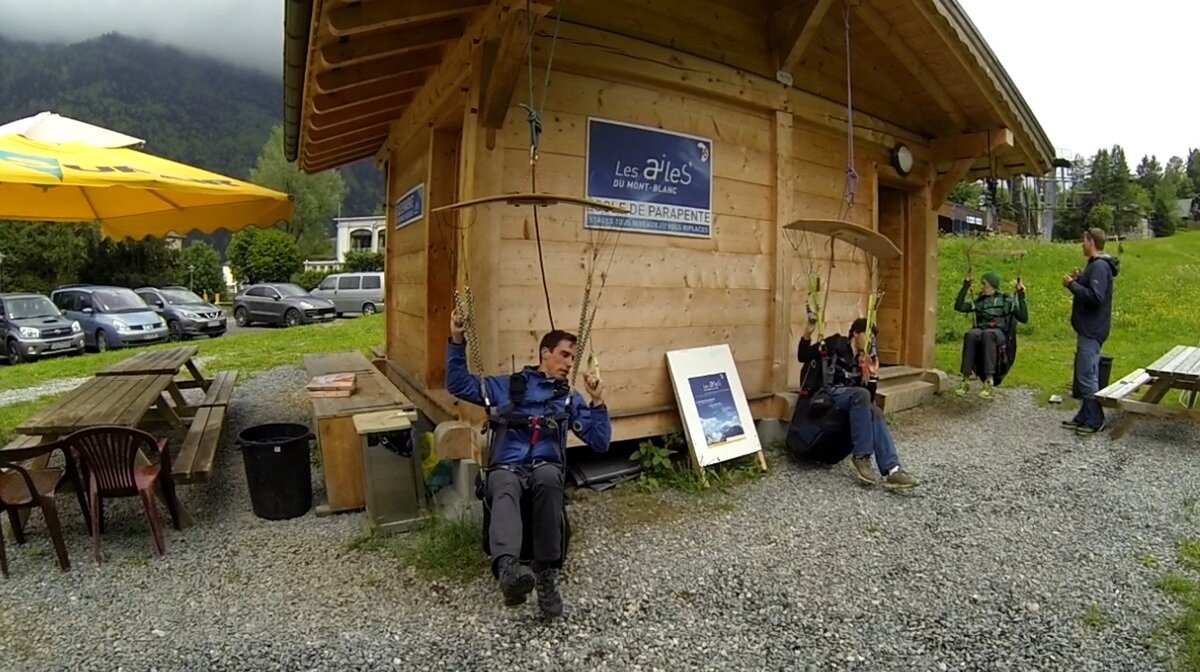 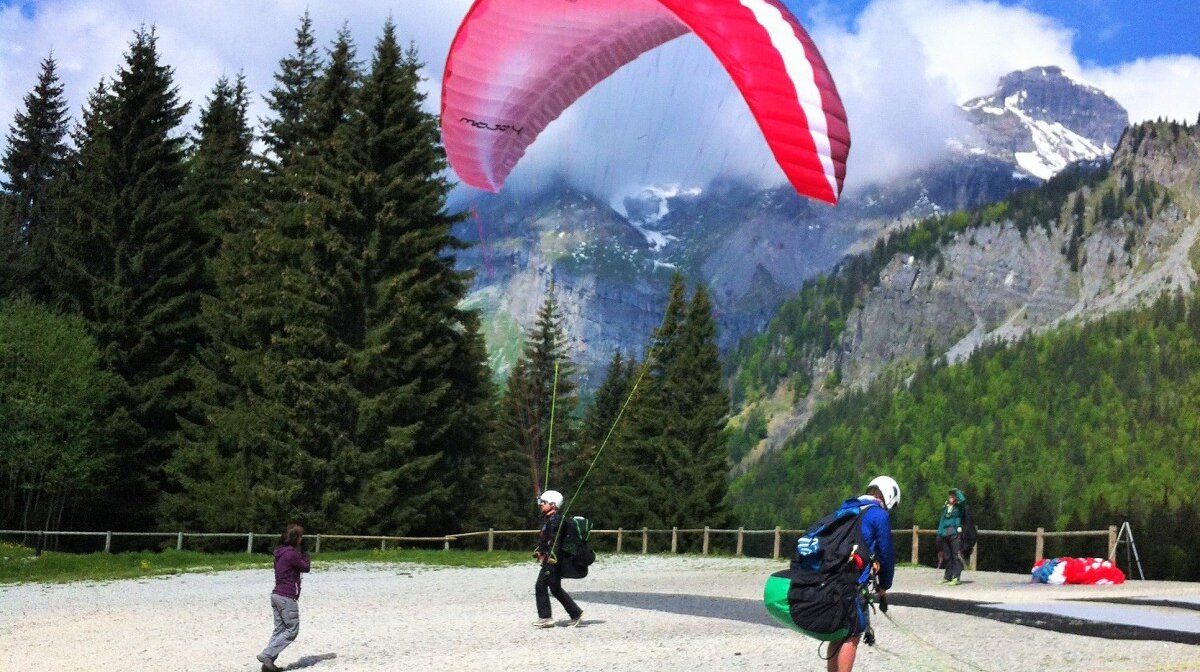 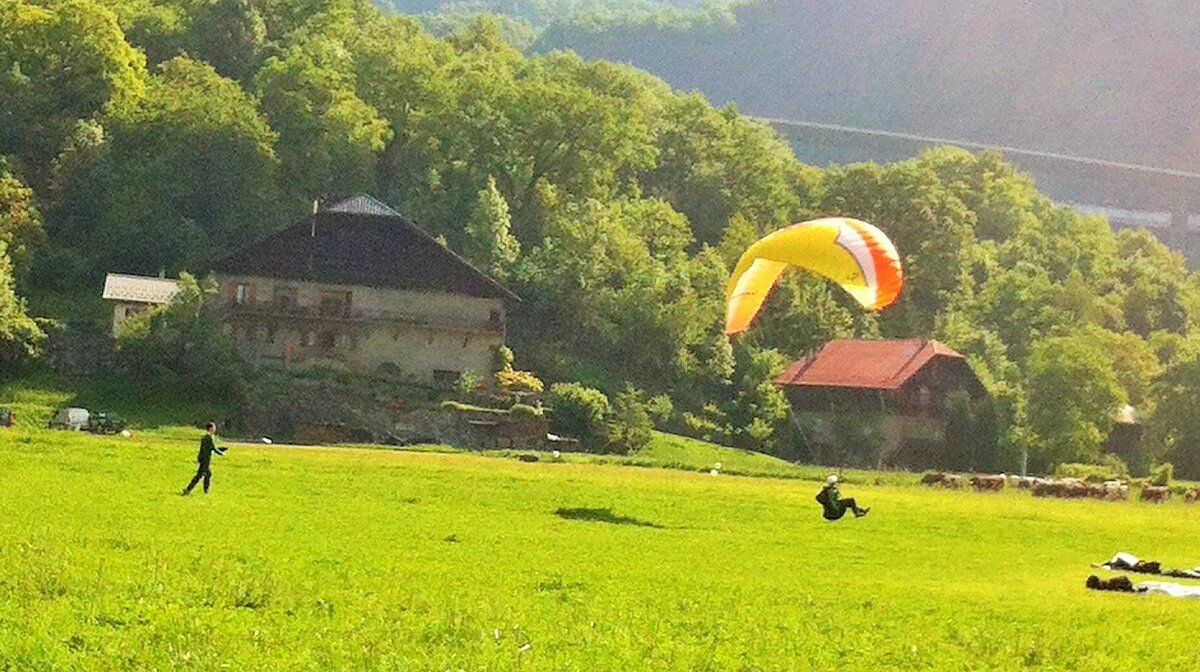 Ever dreamed about souring through the air like a bird? Nothing but the wind in your face and the world drifting by below you...

Having lived in Chamonix for a few years now I've often looked up to the sky on a clear summers day to see an uncountable number of colourful wings floating around, and I've always thought to myself – “I'm going to do that one day”. Well, after years of putting it off I've finally taken the plunge and have just finished a week long beginner course with Les Ailes du Mont Blanc, one of the Parapente clubs in Chamonix.

Having booked months ago May arrived and my imposing doom was not far away. It had snuck up on me and I wasn't even sure how they were going to teach me to fly. So I re-read my emails which informed me of the compulsory insurance and the medical certificate I needed to get to prove I was fit to practice paragliding. All reassuring things to think about before trying to defy gravity!

So the big day arrived and after a night of tossing and turning I was at the Clos du Savoy at 8:30am ready to go. With my friend Angus we met the four other people in our group; Mac and Alex, two American lads who are in the army and based in Germany. Plus two French guys, Victor from Lyon and Lucas from Chamonix. A nice sized group and a nice mix.

Being mid May the weather was a bit uncertain for the week, so with a clear morning we went straight into the practical side of the course - learning how to set our wing ready to fly and how to get in and out of our harness. Then our 2 instructors taught us how to inflate our wing and run with it as we would for takeoff. Our instructors were Richard, a former student of Les Ailes du Mont Blanc, this native Englishman (fluent in French) has launched himself enthusiastically into a new career as a paragliding instructor, and Sandie, a French, European and World Champion in the 1990's and early 2000's and an instructor since 1992 (fluent in English with a lovely French twang).

So setting out the wing, checking the lines, strapping into your harness, and then running down the hill into the wind trying to inflate your wing above your head, not quite getting it right and then getting advise on how to do it better next time almost made you want to run up the hill (almost) so you could try again. This is how the rest of the morning went, until I did finally realise that I was getting a little tired. Fortunately for me this was lunch time, so an hour’s break and a chance to refuel was just what I needed.

After lunch came some theory on takeoff, which was a nice way of doing it because this meant it was very relative to what we had just been doing practically. The weather was still nice, so we did some more ground handling. Gustier winds meant we took out the smaller speed riding wings, so we wouldn't be blown away, but meaning we could practise the techniques. Although easier to get into the air, they were a little more sensitive, which resulted some funny moments of people running diagonally across the field trying desperately to keep these things in the air.

Well, day two the weather was very in and out with showers stopping and starting. So in the moments of sunshine we would be out practising our ground handling, and then when it was raining we would be inside doing theory. This made us very proficient on unpacking and packing away the wings. Day three was very similar to this, meaning that we got to cover the theory well, but did mean that I wasn't overly confident in my ground handling for takeoff. Both Sandie and Richard were pleased with our progress and thought we were ready to do our first flights the next day.

So I had another nervous night’s sleep, dreaming about takeoffs. But then Thursday morning came and the message came through that the weather was too bad for us to fly and the course would roll over into the weekend and hopefully we would get to fly, weather dependent, Friday and Saturday.

Friday morning at 8am we travelled down the valley, still not certain we could fly. We planned to fly from Plaine Joux just outside the valley, because it has more sheltered conditions and an easier take off. Arriving at the landing field we went back over our flight plan, which we had already done in theory, pointing out landmarks for the flight, taking note of the wind and our approach for the landing.

Then we were off, leaving Richard behind who was going to talk us down on the radio, and travelling with Sandie up the 10 minute drive to our take off site. We all went up to have a look from where we would be taking off, which was shorter than I had imagined. Then we each prepared our own parapentes, got in our harness before bundling up our wing (so the lines don't get tangled), moved up to the takeoff and waited for our turn.

Sandie was at the end of the takeoff ready to tackle us to the ground if we got the takeoff wrong. I watched four of my colleges go before me. Then it was my turn. I took my place at the back of the takeoff, Sandie double checked all my equipment, did a radio check with Richard at the bottom, and then told me I was ready to go. A few deep breaths, a last look at the windsock to check I had some head wind to inflate my wing, then off I go. The wing comes up above my head, I step to the right slightly to centre myself under the parapente and accelerate looking at a small white house on the hill the other side of the valley. The takeoff gets steeper, I lean forward in my harness and put my arms back ready to takeoff. I leaped forward into the air, only to hear a gasp on the radio (your supposed to keep running into the air, in case you touch the ground again), but I got away with it and there I was suspended above the trees floating in the air.

I sat in my harness, tried to relax and remember what I had to do next. I listened to the others being talked down into their landing, whilst I made turns to loose height. Then Richard radioed me to make my landing approach. I followed his instructions, made my final turn into the wind, pulled the breaks just before the ground, but I had forgotten to get out of my harness, so very gently skidded along my bottom to come to a halt!

A quick pack away and back up we go for our second flight. Sandie debriefed us on the way up, telling us the mistakes we made...and the little things we did that made her laugh. My second flight was easier, except for a failed take off that Sandie told me to stop on because I wasn't running forward quick enough. However in the actual flights I got to take in a lot more of my surroundings and remembered to get out of my harness for a smooth landing on my feet. We had our debrief, a well-deserved beer and lunch at the local bar right by the landing field.

The last day really sold it to me. With excitement in my belly instead of nerves I was ready to fly. It was Saturday and the takeoff site was busier than the day before, but there seemed to be a good system and a healthy respect between everyone there. We did have a nice spot in the middle of the takeoff which I'm sure was a little something to do with Sandie seeming to know everyone there. My take off went better, still some tiny mistakes and always room for improvement. We tried inflight exercises, which were quite a thrill, but I'm sure they didn't look like I was doing that much from the ground. We managed to fit three flights in and with each one we took more responsibility for ourselves, with less radio instructions. The final jump was about midday and I could feel the air becoming more turbulent moving me about. A glimpse of thermal flying.

My beginners’ course was over. We spent that afternoon chatting about how we can get ourselves to a position of flying independently. Because although I'm not ready to fly on my own yet, I'm not too far off...

Get my own parapente, do lots of ground handling, have a few more lessons. Then on the right days I could turn my ten minute flight, where I just go down, into flying around the valley going up and down...potentially for hours! So here I sit dreaming about the next chance I get to go flying, watching the swallows outside my window floating on the breeze and thinking “I can do that!”

Find out who you can go flying with in Chamonix.