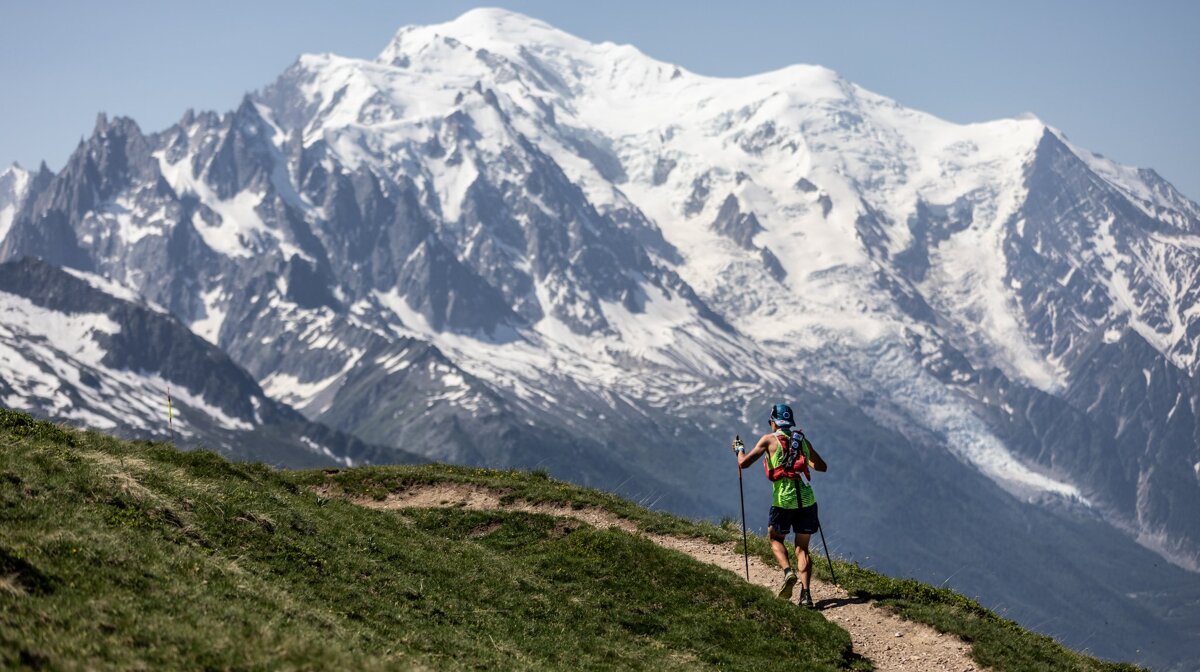 If you’re a fan of trail running then the Marathon du Mont Blanc is the ultimate challenge. The main event covers 42km and climbs over 2,000 metres, this high-altitude race is for the super-fit.

An annual event, the marathon takes place every June and attracts thousands of competitors and spectators. There are a number of other races and extra events held throughout the long weekend, enabling everyone to get involved in the Marathon du Mont Blanc.

More information and registration via the website linked above.

The Marathon itself starts early in the morning at the Place du Triangle de l’Amitié. Limited to 2,000 competitors, the runners line up to take on the challenge of running from Chamonix to Argentière to Plan Praz (the Brévent mid-station). However for 2022 the race finish line has changed and runners will return to Place du Triangle du l'Amitié where it all began many hours before.

From the centre of Chamonix (altitude 1,035m) the runners set off along the river Arve, passing through the hamlets of Les Bois and Lavancher. It is a steady climb for about 15km until they reach Argentière at 1,250m. The route then crosses the Col des Montets (1,461m) in the heart of the Aiguilles Rouges nature reserve. Following the Chémin des Diligences, the old stage-coach route, the course arrives at the hamlet of Le Buet before reaching Vallorcine (1,260m), a quiet village nestled at the bottom of the valley, just on the edge of the Swiss border.

The runners then climb up to the Col des Posettes at 1,997m where (if they can still see straight) they can take in splendid views over the Mont Blanc massif, opposite the Aiguille and the Tour glacier. The route then gradually descends across the mountain passes to reach Charamillon at 1,850m. A steady incline takes the runners up to the village of Le Tour (1,453 m) before flattening out along the road leading to Montroc (1,382 m).

After passing through the hamlets of Frasserands and Tré-le-Champ the route returns back onto the historic route of the Mont Blanc cross-country race. At the heart of the Aiguilles Rouges massif, opposite the Mont Blanc range, the route ascends until La Flégère (1,875m) after crossing the magnificent Charlanon Coomb (1,812m). A gentle yet progressively steeper descent makes up the final stretch down through the forests, bringing the runners down to town level and a finishing run through the streets to the finish line.

The beginning of the race, from Chamonix to Lavancher is mostly in the shade, however, much of the race is under the full glare of the summer sun. This race is much more gruelling than your average marathon; not only is it over cross-country trails and up steep ascents but Chamonix itself is almost as high as Mount Snowdon – so before the runners even set off they are struggling with racing at high altitude. This is evident in the race times; the average Marathon du Mont Blanc winner usually completes the course in around 4h to 4h30. If you compare this with the more well-known London and New York marathons, where the average winning time is usually just over two hours, you can see a clear difference.

Place du Triangle de l'Amitié and throughout the mountains.

For those who would rather cheer from the sidelines there is plenty to keep you occupied whilst the runners are slogging it out. Giant screens are erected with live feeds to different points of the race, so you can keep an eye on the action from Chamonix. Many people hike up to Flégère (you can take advantage of the lift system if you prefer) to cheer on the competitors as they reach the final stages of their races. The villages along the route often have a good turn-out of spectators, so the runners enjoy plenty of support and there is a good atmosphere throughout the valley. Entertainments such as climbing walls, bungee trampolines and live music add to the fun and the weekend culminates in the prize giving ceremony at Place du Triangle de l’Amitié (the space in front of the tourist office).

There is usually a celebratory buffet meal or ‘Pasta Party’ after the Cross and the Marathon races, giving competitors the chance to meet, chat and congratulate each other on their achievement.

Every year hundreds of volunteers are involved in the organisation of this event. If you would like to volunteer and support the event, visit the website or use the enquiry form the find out more.

This legendary event was first run in 1979 as a 23km cross-country race, with no fewer than 450 entrants. In 2003, on the 25th anniversary of the race, it added a 42km race and became the Mont Blanc Marathon. The 23km race remains a part of the event to this day, and over the years other races have been added to the calendar and entrant numbers have increased, meaning organisers have needed to limit entry numbers for some races.

In 2013, the Marathon became an official race on the ISF (International Skyrunning Foundation) calendar of international events - Skyrunner Trail Series.

Salomon became the first partner of the Marathon in 2003 and has remained a name synonymous with the event ever since.

If the marathon itself is not something you would see yourself entering, there are a number of other races that take place under the 'Marathon du Mont Blanc' umbrella.

The Spanish ultrarunner Kilian Jornet has dominated the 42km race since 2012, winning a total of five times up until 2018.

Registration for the Marathon events typically opens in October of the preceding year. Registration is via a ballot system and is exclusively online.