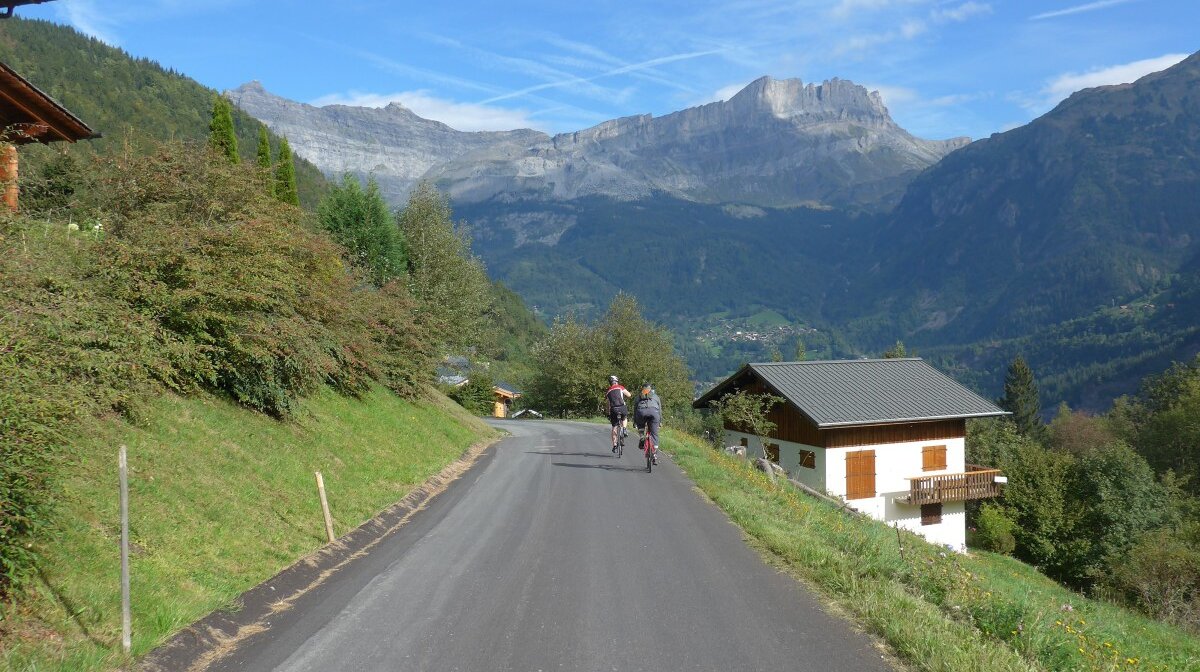 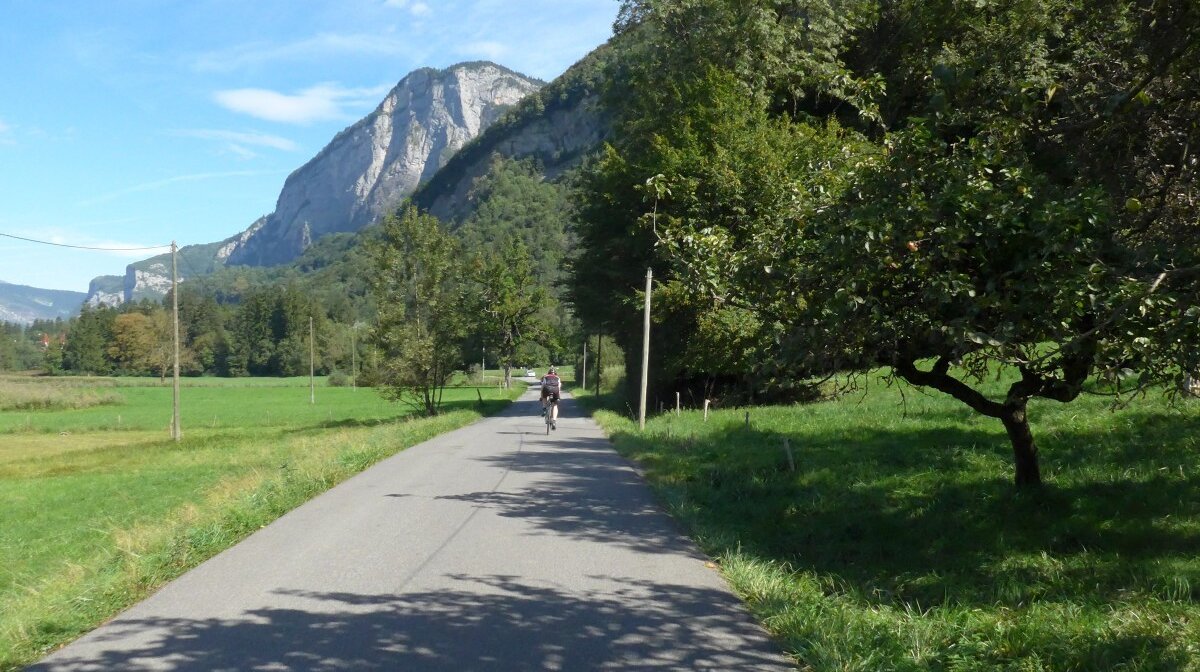 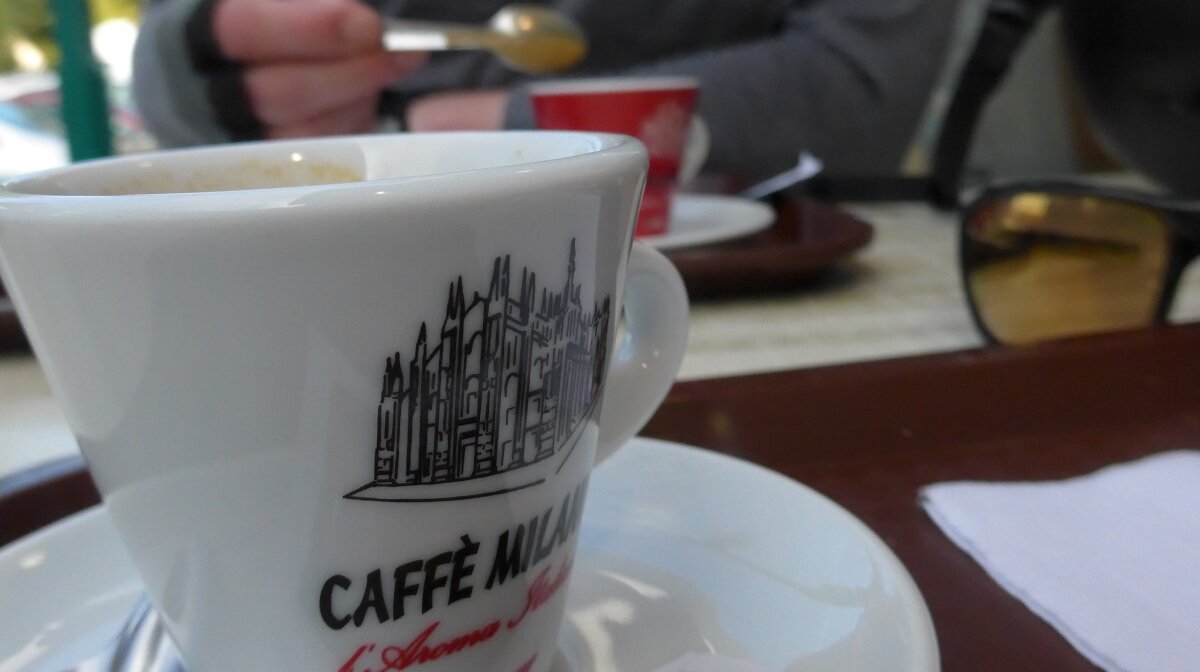 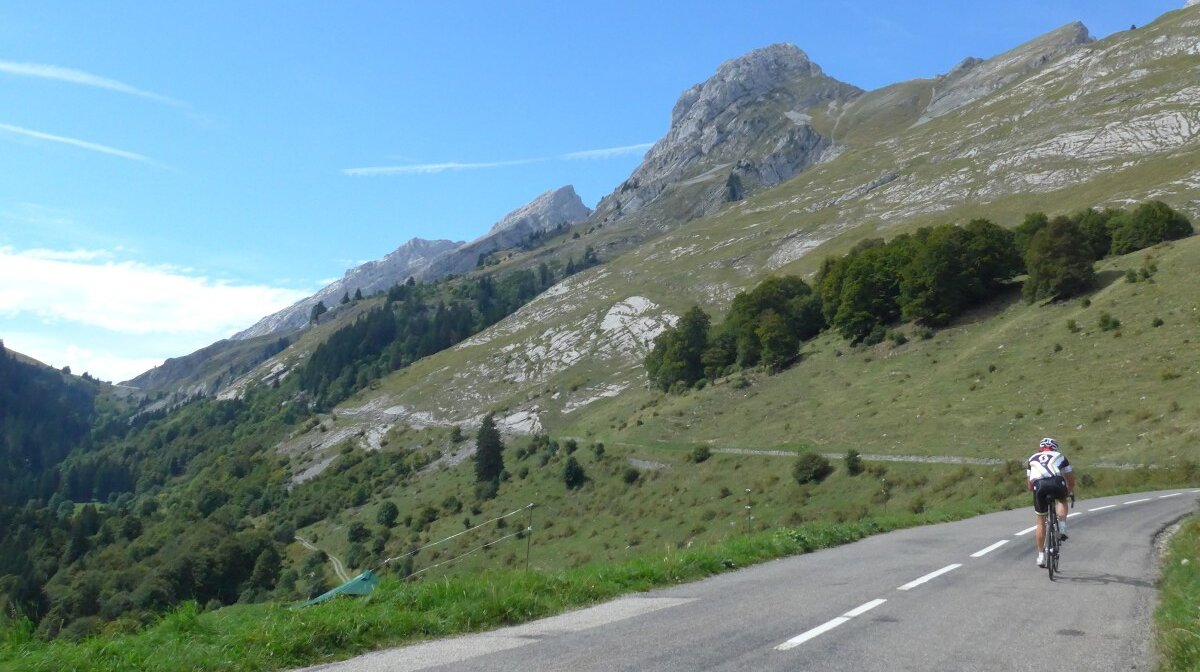 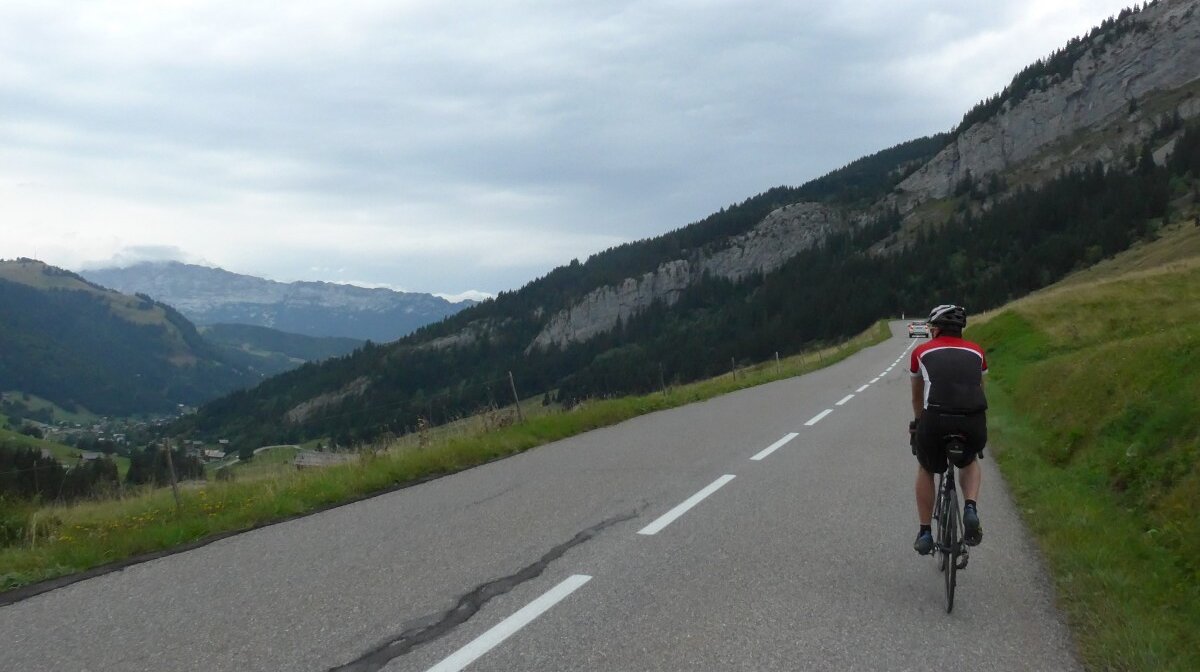 The first few km were all about getting the saddle right

Perfect postcard views of the Fiz from Vaudagne

Avoiding the Route National along the Arve valley

The last 3 km to the Col de la Colombiere, harder than they look

Chamonix isn't as synonymous with road biking as some of the other areas of the French Alps. Whilst the Criterium du Dauphine Cycling Race regularly passes nearby, the valley doesn't conjure up images of the Tour du France the same way as names like Alpe d'Huez or Col du Gallibier. Still, that doesn't mean there's no tarmac to ride on and no cols to conquer, or at least climb, perhaps make that grovel over.

So, inspired by the weekend's Evergreen 228 triathlon (an event considered brutal even by Chamonix endurance standards) we thought we'd pass on the swimming and running (and about half the cycling) to try and pedal over the Col de la Colombière and Col des Aravis from Chamonix.
Perhaps the best part of this plan was that for most of the first 30km, you're riding downhill. Probably just as well as, being on a collection of borrowed bikes, there were plenty of stops in the first few kilometres to adjust saddles and try and find a less painful position.
Sitting comfortably, the roads past Servoz and Passy into Sallanches have stunning views in all directions, including straight ahead to the Chaine des Aravis which we were to be riding behind in a few hours time. The signage for the recent triathlon took us away from the busy route national out of Sallanches and instead past the Cascade d'Arpenaz on a quiet back road. So far so good!
Apparently in the world of road biking cafe stops were vital, as novice roadies who were we to contravene this rule? Espresso and panini readied us for the main event of the day, the 1100m climb to the Col de la Colombière.
The climb starts easily, from Cluses the cycling marker posts count down the kilometers you've ridden and count up the gradient you're climbing on. From the town the gradient is a relaxed 2% to 6% and the trees give shelter from the sun as the road twists up the hill. This doesn't last though, and by the half way height we were under the full glare of the sun and starting to feel the effort. Still, if we were feeling it, imagine how it felt for the triathletes who'd already cycled over 2 cols and swam 4km!
The last 3km of the climb taunt you with the view of the col in the distance getting nearer but never getting lower. The marker posts show the climb gradient climbing to almost 11% and it's a cruel sting in the tail for your legs.
Eventually though we made the col and its cafe, never has a cold coke tasted so good!
The top of the col marked the halfway distance for the ride, but from here the character of the route changes. Instead of lots of flat and one huge climb, we now had rolling roads and less than 500m of elevation to gain on each ascent. The road down to La Clusaz gives views very different to Chamonix, much more green pasture and rolling fields, great change for the day.
After the length and gradient of the Colombiere, the climb to the Col des Aravis seems easy, never too steep and not too long. Just like the Col de la Colombière before, it too has a selection of cafes at the summit, however by now the clouds were starting to gather and we were keen to crack on before some proper weather arrived.
A brilliant descent twists and turns down from the col to the small village of Giettaz, taking in an unlit tunnel with a bend in it just to keep you on your toes, and then it was back to having to pedal as we cruised along to Flumet.
Here the triathlon course once again saved us from having to use the busier Route National and instead we took a small road above the village and past more cow filled pasture to just the outskirts of Praz sur Arly.
It had been a long time since we were able to adhere to the cafe rule and we took the first opportunity we could to stop and grab some food. I don't think the last croissants in a boulangerie have ever been received so gratefully, or consumed so quickly.
Road bikes seem to eat up the miles very quickly when it's flat, the road from Praz sur Arly to Megeve passed in no time at all and soon we were well on our way down the long descent to Le Fayet. The view across the Arve valley showed Sallanches disappearing into a rain storm which spurred us on to even faster speeds.
If you've read much about the Tour du France and its participants then you'll know that there was a bit of a kerfuffle about drugs recently, and that the riders are incredibly, ridiculously hard. No injury will stop them completing a stage and no stage is too difficult. We are not road bikers however and, appealing as the 500 metre climb back to Chamonix in the rain and receding daylight must sound to one, we preferred the idea of a pint in the station bar followed by getting the train back up to town.