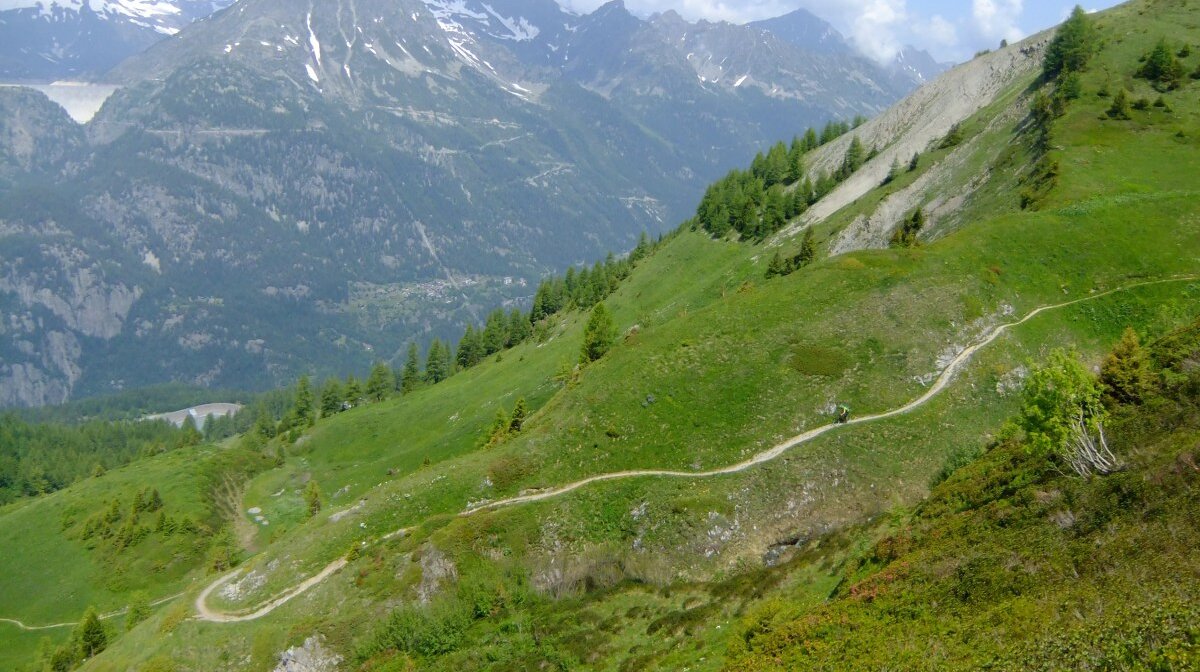 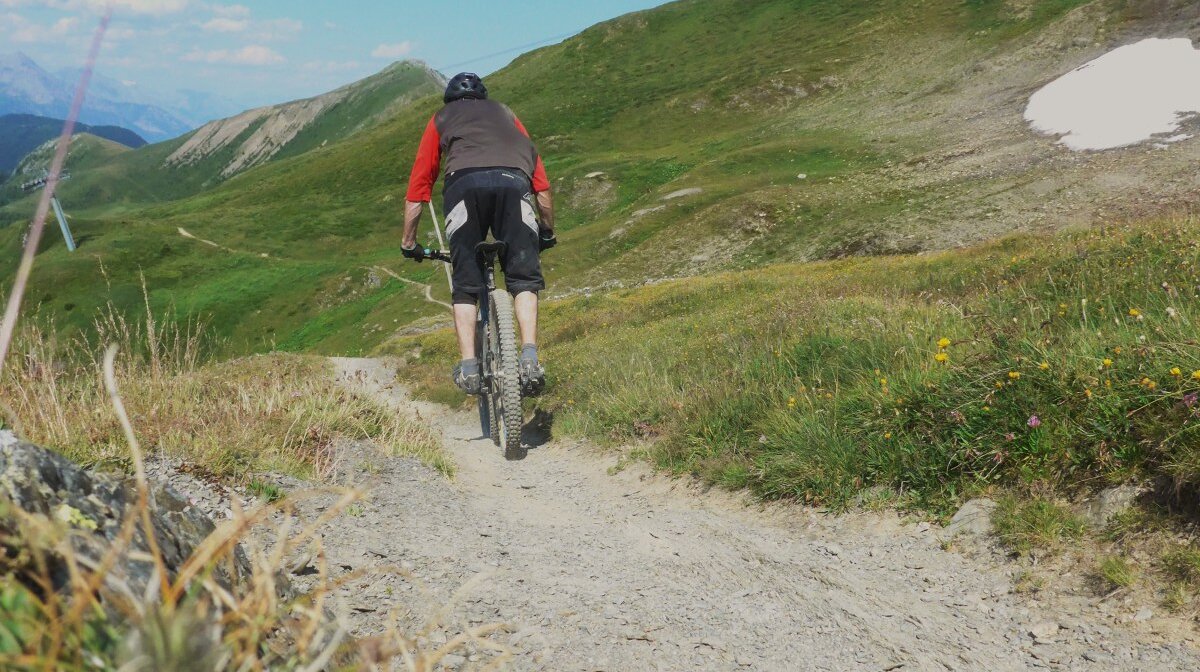 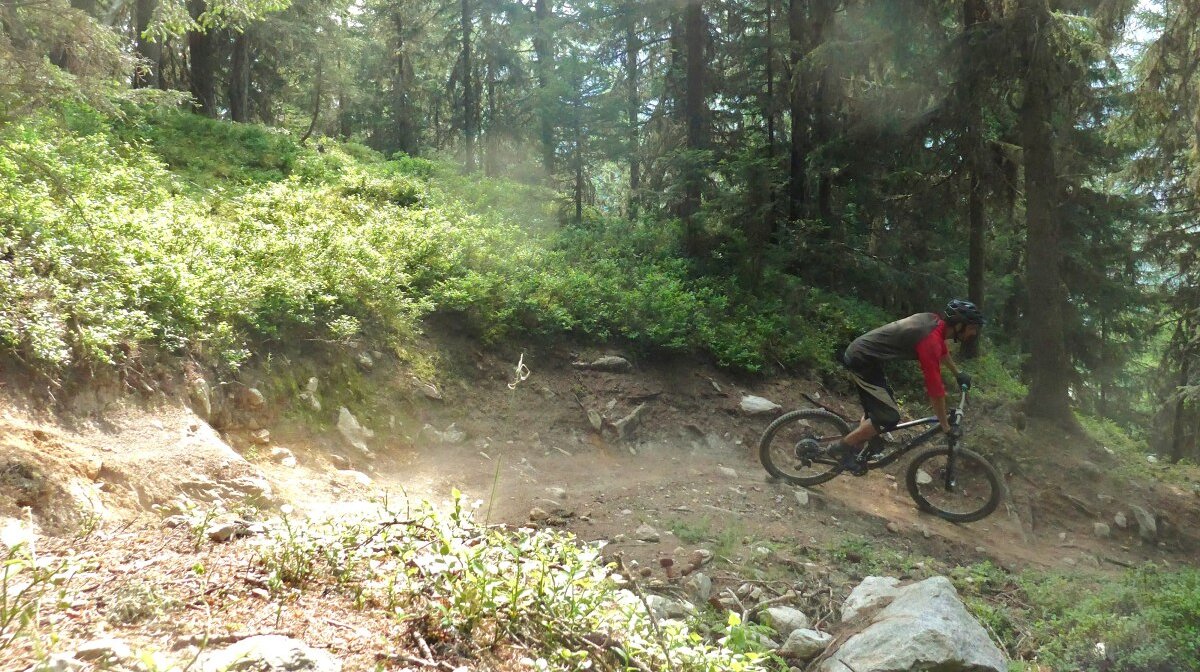 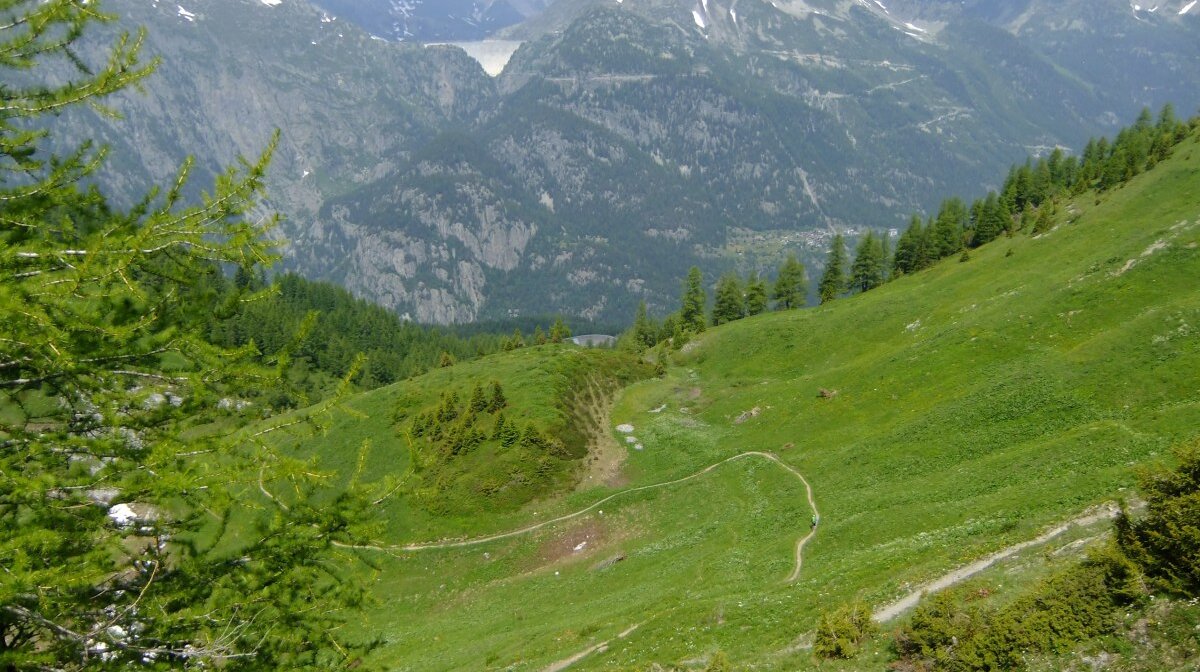 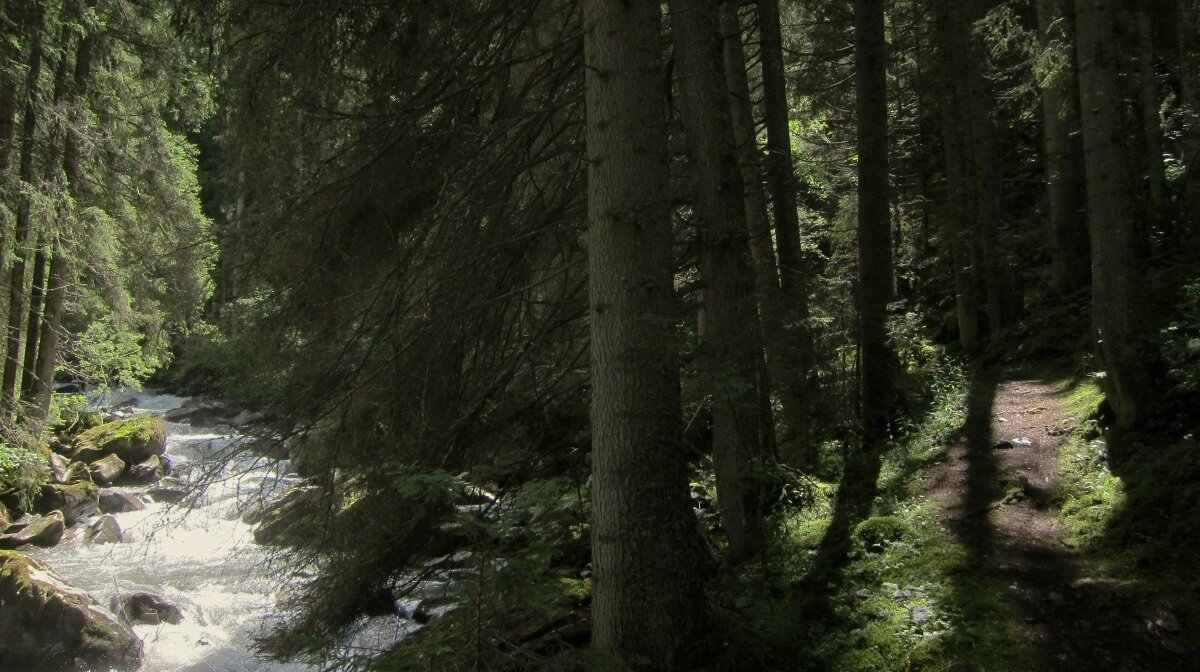 a tiny mountain biker on a far hillside in sowtzerland

a mountain biker heading off onto a trail in chamonix

a river and trail next to it on the trees

It's high summer in Chamonix, the During July and August mountain bikes are banned from all but a select few trails in the valley in an attempt to reduce conflict between the users of the trails. Fortunately the bike ban doesn't mean you have to stop riding the amazing singletrack of Chamonix, you just have to ride different trails!

One way to get your biking fill is to head to the top of the Chamonix valley at Le Tour where in addition to the purpose made bike trails, a vast network of paths snake over from the Tete du Balme and into Switzerland where the trails are every bit as good and, if you stay away from the Tour du Mont Blanc route they're deserted of walkers.

With yet another hot sunny day in front of us, we headed up to Le Tour. One extra consolation during the bike ban is the provision of buses between Les Houches and Le Tour equipped to carry your bike, particularly useful if the train is already full!

From the top of the Autannes chairlift we kept going up to the Refuge du Col de Balme and the throngs of Tour du Mont Blanc walkers enjoying lunch (OK, so we didn't exactly have the earliest start for a days riding). Two variations of the TdMB join here, to the right the Arpette varient, in front the shortest route up from Trient and over the Croix du Fer yet another variation. We were after the quiet trails though, so took the furthest left trail which contours round the hill to eventually pass under the Tete de Balme chairlift and into Switzerland.

From here the trail is everything you could want from an alpine trail. Huge views across to the Emosson dam and back into the Chamonix Valley, clear air and a thin ribbon of singletrack winding though the grass. There's about 500 vertical metres of this fun, past the Catogne chalets and down to the forest.

Turning left at the junction here takes you back to France and eventually to Vallorcine, but we wanted to stay Swiss and kept right into open alpages between the trees, always on the same amazing singletrack. Eventually we hit a 4x4 track, but that didn't mean the fun was over, just a rest for the braking fingers. A needed break at that as after about 500m of cruising we turned off left, feeling like we were going through someone's garden, and back into steeper more technical singletrack deep in the woods.

Finally we arrived at the base of the trail, spat out from the idyllic singletrack into the carpark for a construction site by the main road. A bit of an abrupt change for sure, but after the 1200 vertical metres we'd just ridden, we could forgive the trail this slight anti-climax.

Perhaps more of an anti-climax was then having to put the saddles up and start climbing back up the road under our own power....and under the early afternoon sun. It's only a short section up to Chatelard though, from where you can follow the bike signs past the border station (you did bring your passport didn't you?), away from the tarmac and into the trees. It's quicker to pedal up on the road, but when it's this warm we'd rather take a bit more time and stay by the slightly cooler air of the river and shade of the trees.

We could have stopped in Vallorcine, but there was more riding to be done so onto the Vallorcine gondola it was and seven minutes later we were stood at the top of the best reason to own a downhill bike if you live in Chamonix. The Vallorcine DH trail is a full on DH trail, even ridden slowly it's rough, steep and intimidating. The amount of maintenance it's received has varied over the years, currently it's getting just enough to keep it rideable on most bikes, but not so much you'd be tempted to call it bike park. A complete contrast to what we'd just been riding, but a change is as good as a rest, even if a rest isn't what you feel like you're getting!

After several laps of battering down the track it was time to start heading back. An easy option would be to catch the train from Vallorcine, but with a lift pass to make use of, it was back up the gondola, a 5 minute pedal over the Col des Posettes then downhill (well, mostly downhill) on the petite balcon sud all the way to Chamonix - 3000 metres of top class descent under our wheels, a grand afternoon out.