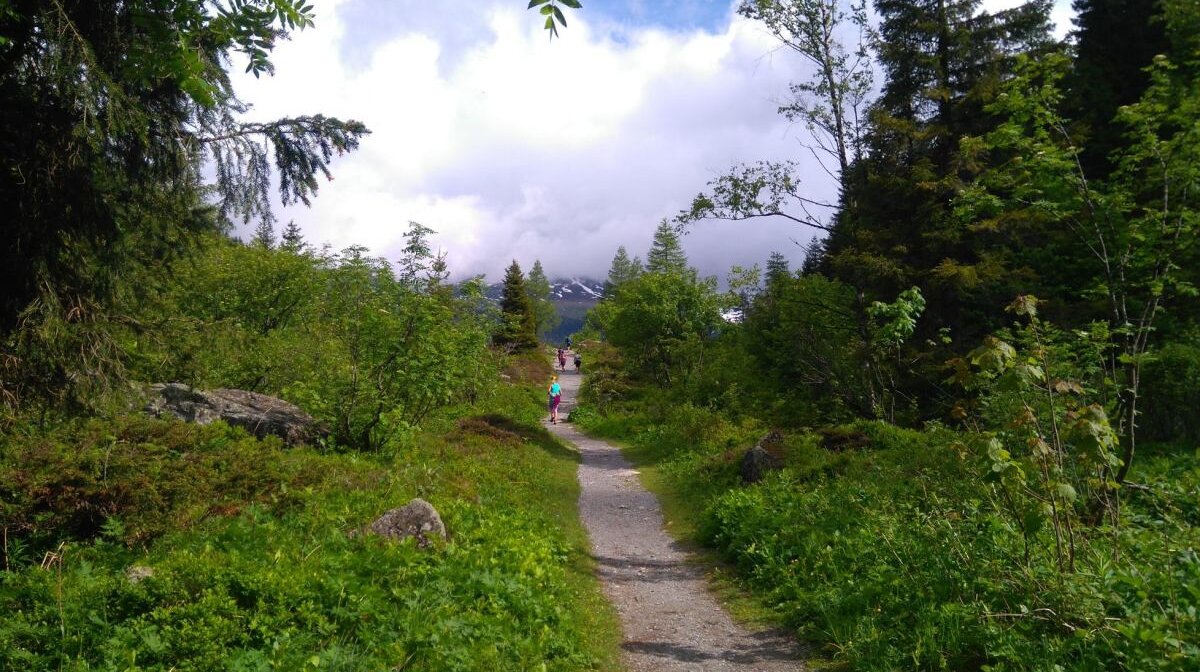 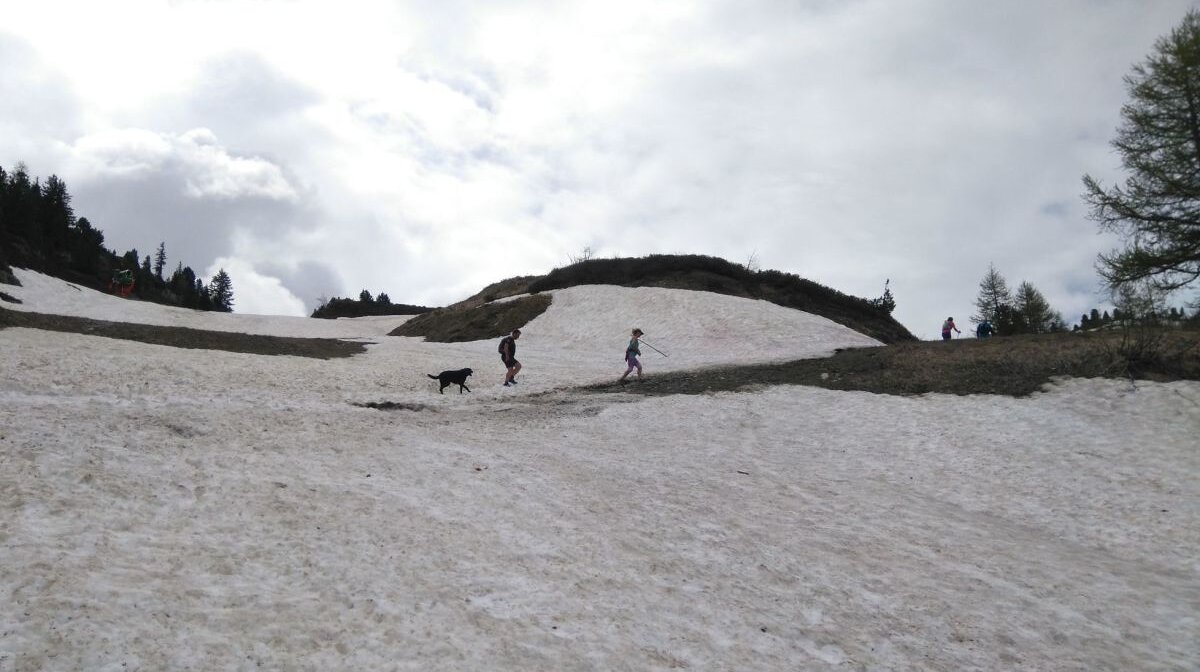 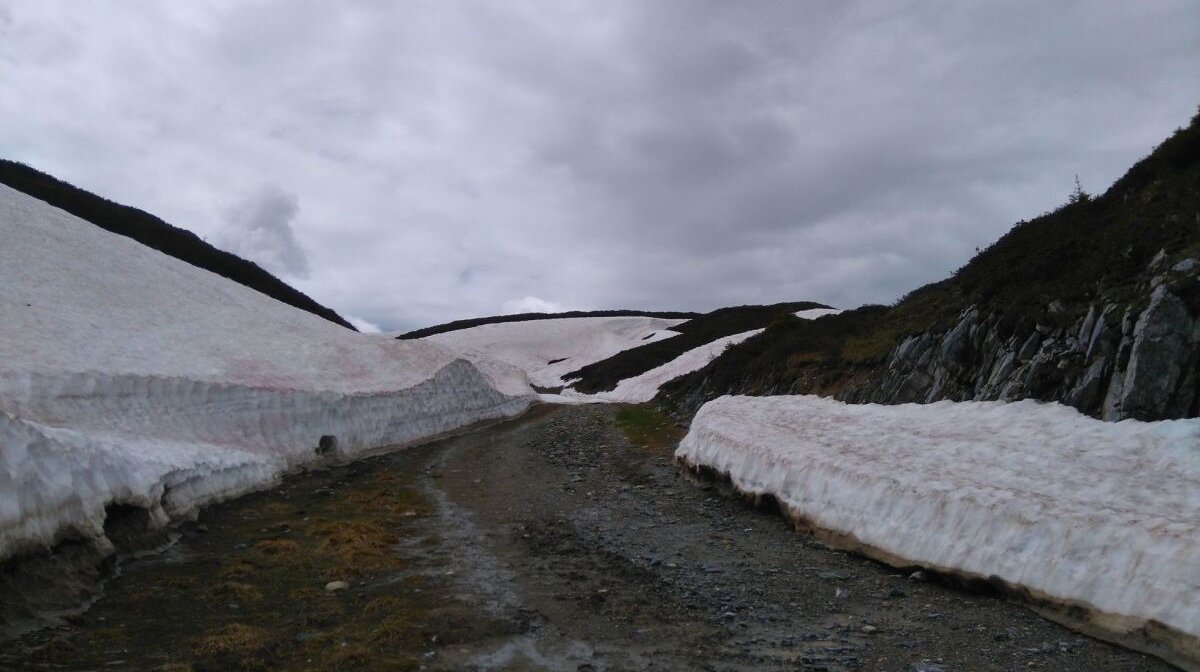 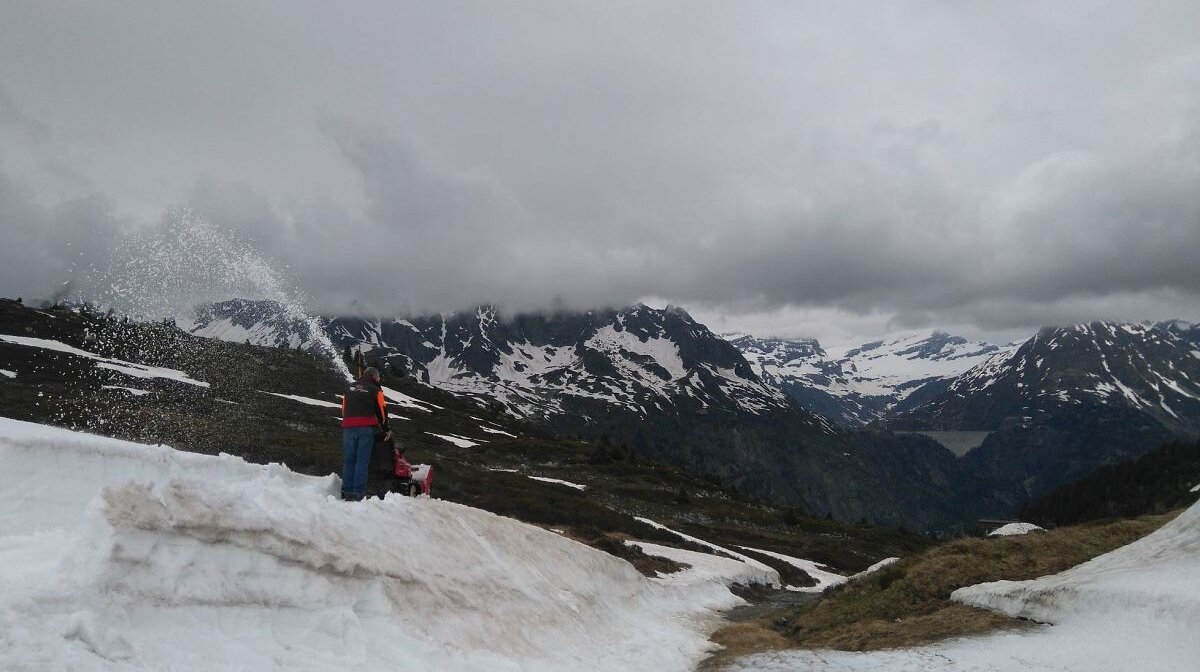 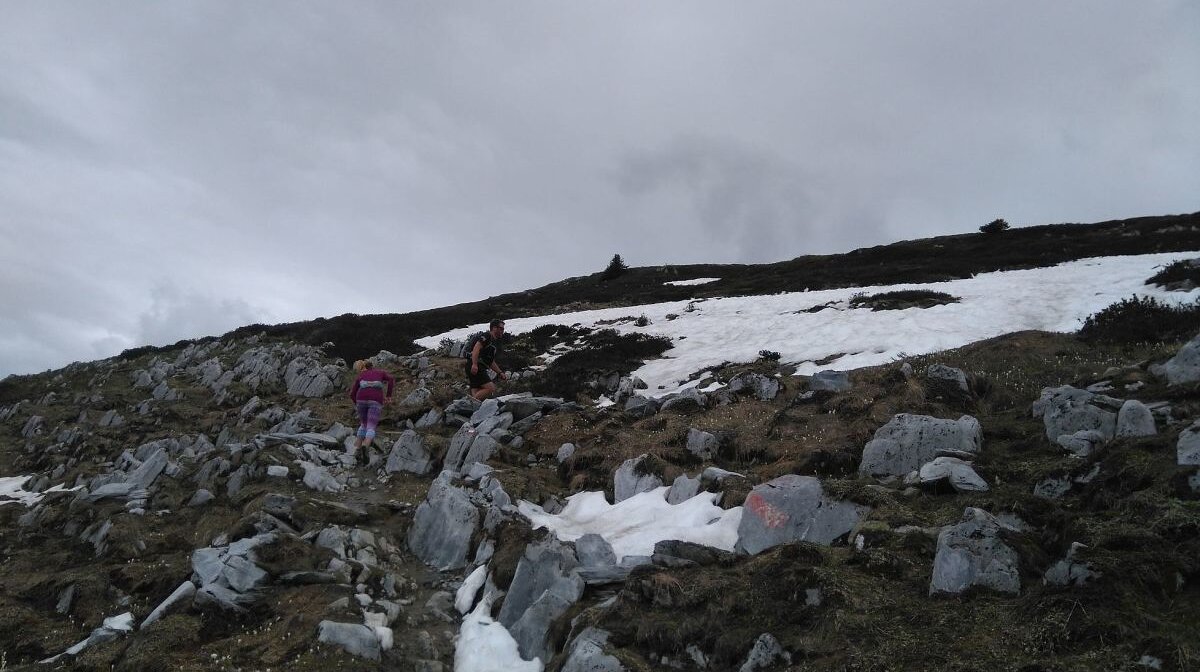 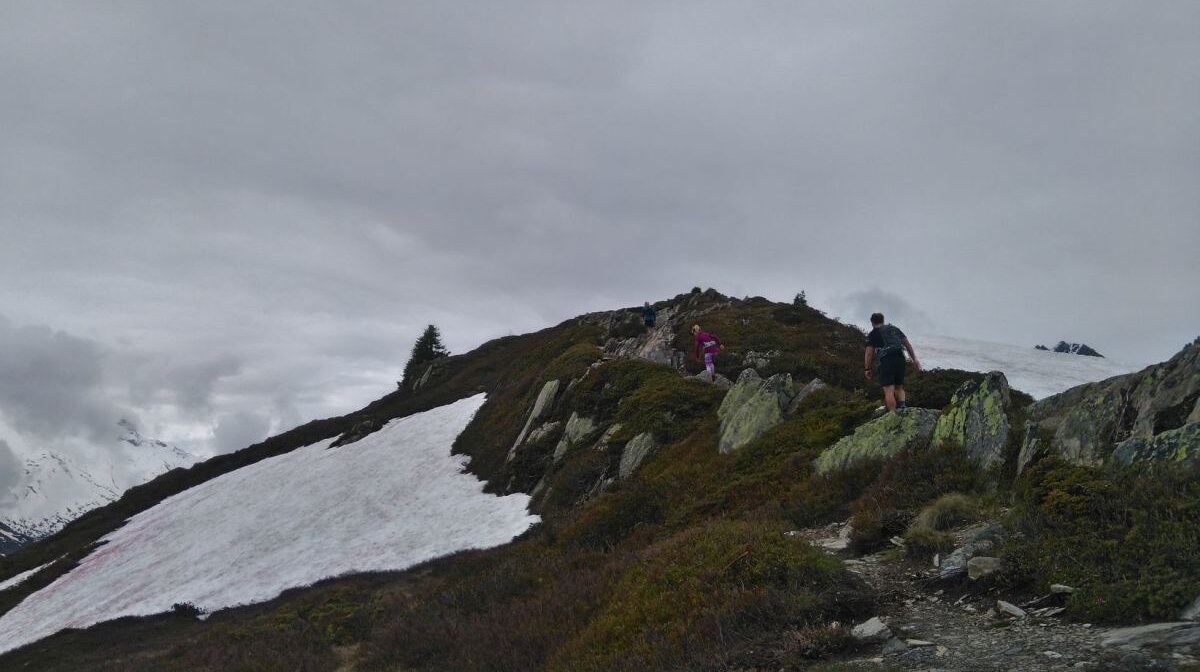 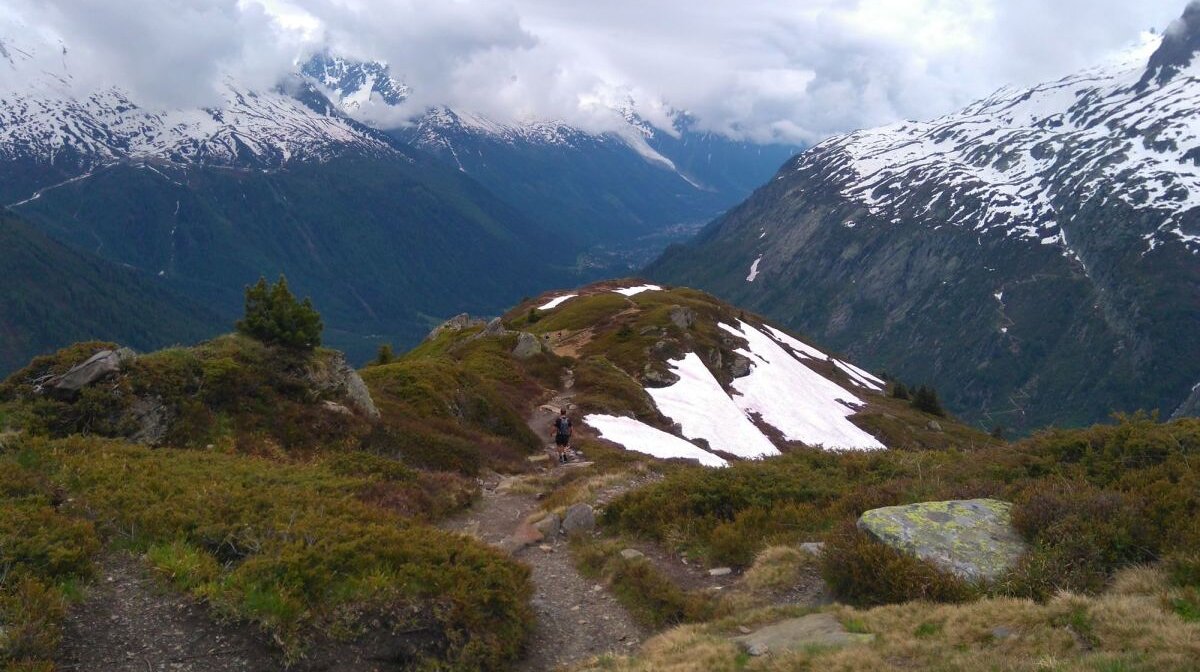 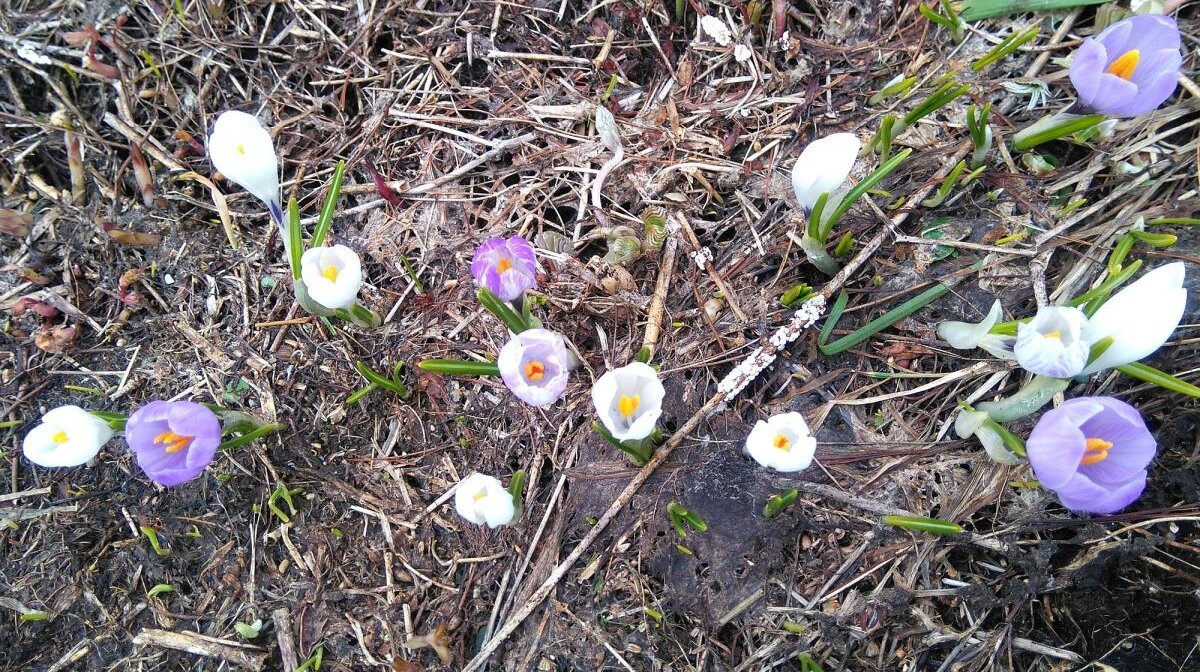 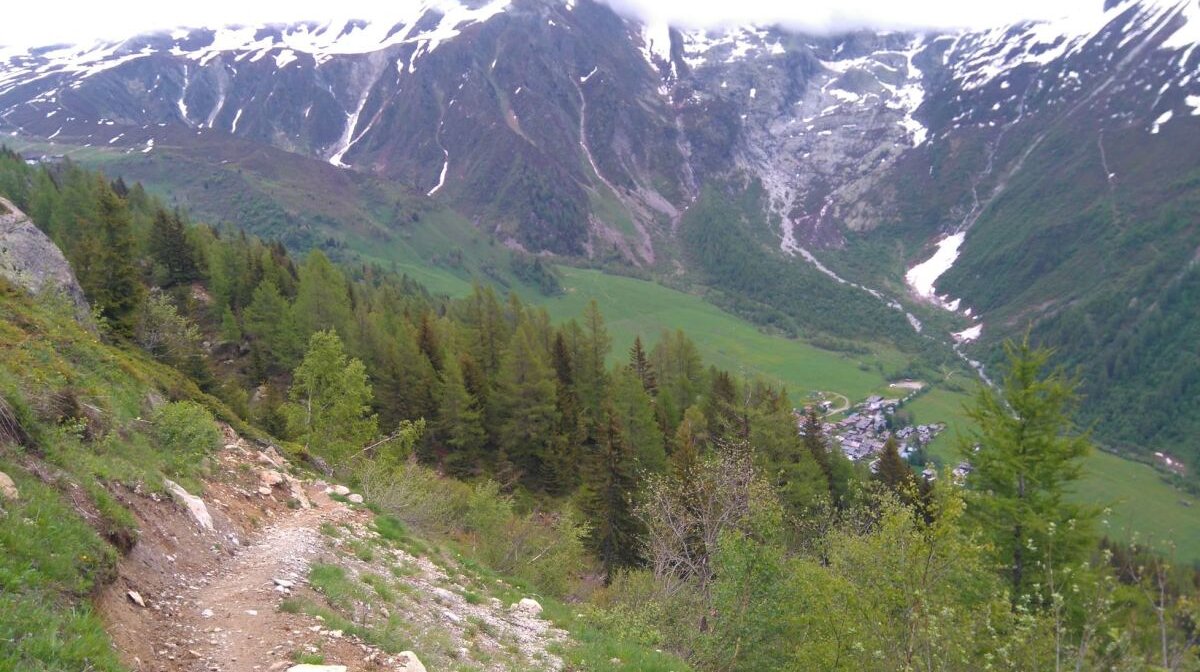 Patches of snow on the way up Aiguillette des Posettes

Spring flowers up at Le Tour

Trail looking out over Le Tour

With just two weeks to go until race day the big question that's everyone is asking is "how much snow is still up there?!"

After recceing the Cross du Mont Blanc half-marathon route last week and having to turn back before the finish due to so much snow, we weren't hopeful of getting up and over the Aiguillette des Posettes at Le Tour - the highest point of the race at 2201m.

Starting from Chamonix we followed the marathon route up through Lavancher, along the Petit Balcon Nord to Montroc, which has been free of snow and in great condition for some time now. The trails are soft and springy and all the recent rainfall hasn't caused much mud to worry about.

We continued on through Tre-Le-Champ and along the nature reserve that runs along the Col des Montets. The weather recently has been ridiculously indecisive - sunny one minute and lashing down the next - but this has brought all the spring flowers out and the valley is looking absolutely lush. Carrying on through Le Buet, we were bouncing along on soft ground with deep grass and meadow flowers all around us.

The home run up from Vallorcine is now completely clear of snow, which was a great relief as only a few weeks ago I'd found myself trudging up ridiculous amounts of the stuff - sliding back so much it was a case of "two steps forward and one step back" (almost managed a Paula Abdul lyric there). This time round we got almost all the way to the top of the Vallorcine gondola before we hit snow, and even then it wasn't too much of an issue to get over it.

There's still quite a lot on the flattish top section of the Col des Posettes but there was a nice man up there doing his best with a snow blower. Yes, seriously.

Once across the col we started the climb up to the Aiguillette, half expecting to have to turn back but determined to give it a go anyway. As it turns out, we were pleasantly surprised to find no more than a few meagre patches of snow that were easily traversed and will surely be gone in a couple of weeks time.

We reached the summit of the Aiguillette at 2201m and started the steep descent of around 850m back down to Tre-Le-Champ, which is where you'll find the last aid station before the long climb up to Flegere. The descent was in great condition, with hardly any snow on it whatsoever and only the occasional slippery patch of mud. If you are a fan of using poles on the way down then this is definitely the time to use them. The descent is steep and rocky, with tight bends and the odd sheer drop - mind your ankles and rest assured that although it is a nasty piece of work, it is only quite short.

From here we hopped on the train at Montroc and headed back to Chamonix; however you can read about the rest of the marathon route from Tre-Le-Champ onwards in our previous report on the Cross du Mont Blanc, as they follow the same route up towards Flegere and across to Brevent-Planpraz.

Plenty of spring flowers are bravely poking their heads through the slush and the air temperature is definitely rather warm - most of us were running with bare arms and legs today. Although the rain isn't exactly the kind of spring weather that brings joy to most peoples' hearts, it is doing a grand job at melting and washing away the remaining patches of snow. If weather forecasts any longer that a week are to be trusted then apparently from next weekend onwards we've bright sunshine and temperatures in the mid to high twenties to look forward to, so that should do a nice job of drying out the trails. It is also makes that celebratory beer at the finish line so much more refreshing.