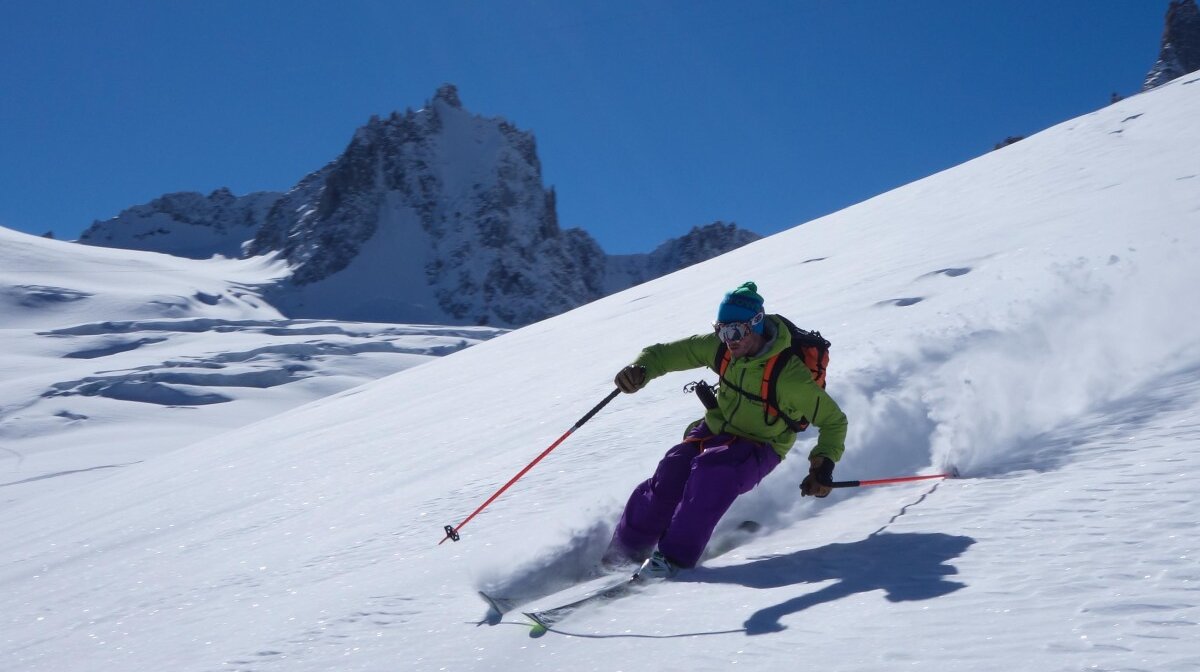 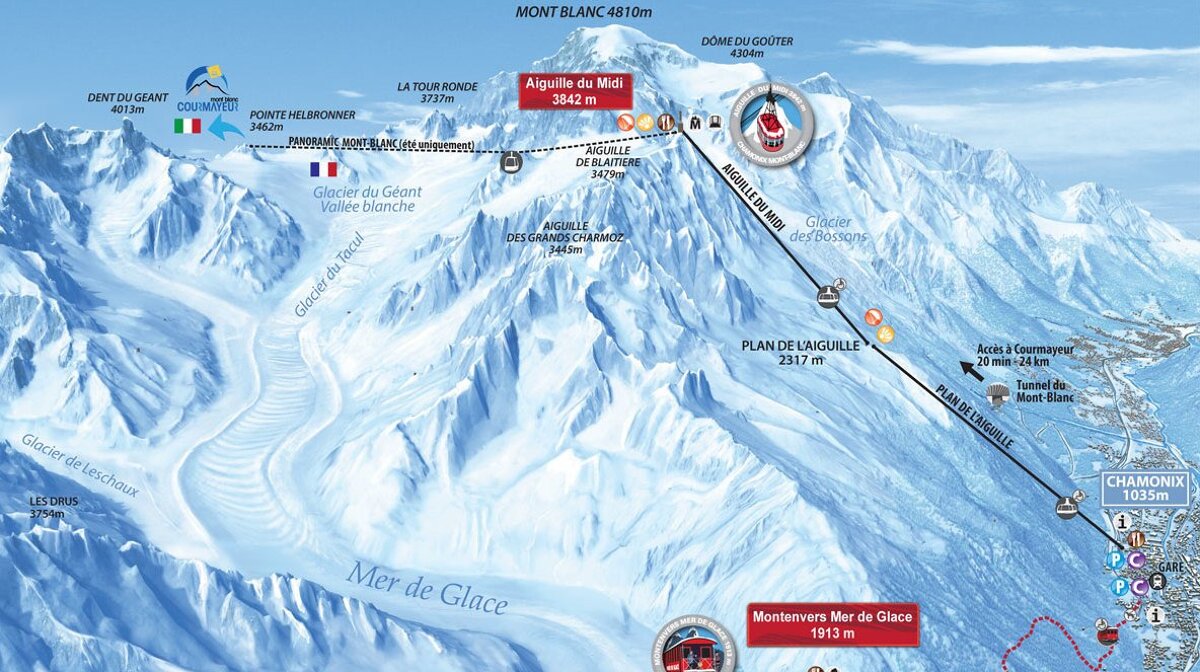 Map of the cable car route

The Vallée Blanche starts at the top of the Aiguille du Midi and finishes in Chamonix’s town centre (snow permitting). It’s an unmarked, unmaintained and unpatrolled high mountain off-piste ski itinerary which offers some of the most spectacular scenery that the Mont Blanc range has to offer.

The Aiguille du Midi cable car is the starting point for this popular route. Generally, the lift company operates a number system where you can phone and pre-book your cable car in advance. This is highly recommended if you want to avoid an unpredictable and possibly long wait on a busy day. A Mont Blanc Unlimited ski pass covers the Aiguille du Midi lift or single/day lift passes are available, prices here.

The numerous Vallée Blanche routes start at the top of the Aiguille du Midi (3812m) where after exiting the ice tunnel you are straight onto the ‘arête’. This is potentially one of the most dangerous points of the route as it is essentially a ridge edge which has a 50-degree pitch on both sides. In high season, a safety rope is placed along the descending path and steps are usually cut into the slopes, but it is still pretty intimidating knowing a safety rope is all that there is between you and the pea-sized buildings of Chamonix town centre.

There are four main Vallée Blanche routes. The classic route ‘voie normal’ is fairly straight-forward providing you are following the advice of your hired guide. The route can be fairly busy during high season. The other routes are known as Le Vrai Vallée Blanche, the Petit Envers du Plan and the Grand Envers du Plan. These latter routes are technically more challenging and involve couloir skiing so are for more experienced skiers.

If skiing the ‘voie normal’ after descending the arête, the route heads to the right of the large rock outcrop known as Le Gros Rognon (‘the big rock’). Along the descending route you will see large séracs, crevasses and ice falls which are pretty impressive sparkling away in various shades of icy blue from the winter sunshine.

Most people make a day of the trip and for many it's the highlight of a skiing trip to Chamonix and they want to enjoy it. If you allow for regular breaks and a bit of sightseeing on the way down you will probably take between four and six hours for the round trip from Chamonix. Don’t forget that queues can be long for the Aiguille du Midi télépherique, the arête from the Midi to the glacier, and for the return train from Montenvers.

A popular pit stop for lunch on the Vallée Blanche is the Requin refuge. A number of skiers also tend to stop at the ‘Salle à Manger’ beneath the séracs. These large ice structures can collapse at any time so it's best not to hang around. If you don't want to carry food with you there is a café at the top, at the Aiguille du Midi and at the bottom, at Montenvers.

The route at the end of the Vallée Blanche really favours skiers as it has a long flat run out which can be tricky for snowboarders to keep moving. During the spring it gets pretty slushy too, so it's recommended that snowboarders take a pair of telescopic poles to push themselves along. In good snow conditions you can ski all the way back to Chamonix’s town centre; if not then the best way down is via the gondola and the Montenvers train.

Guides are not compulsory on the Vallée Blanche, and experienced skiers often make the descent without them. However, if you're unsure of your knowledge or ability on glaciated terrain, you should hire one of the many mountain guides that work in the area. They know the VB routes, can lead you in bad conditions and will minimise the risks involved.

The conditions will define the level of skiing involved. Sometimes there is a firm base and it can be compared to skiing on piste. In that case, it can feel like a blue/red run. However, there may be deep powder, crusty layers or icy moguls, in which case it’s more like a full-on black. Most of the time a skier who is comfortable on any red runs should be able to cope with the easiest of the routes down.

You need wear a harness when skiing on a glacier. This allows you to be rescued from a crevasse should you fall in and to assist a crevasse rescue. You will need at least one rope per party and the associated hardware required to perform a rescue (slings, carabiners, ice screws, pulleys etc). But most importantly you should know the correct method of performing a crevasse rescue.

Avalanche transceivers should be worn by all members of your party. These not only allow rescuers to find you in the event of an avalanche but allow you to find others, so knowing how to use this vital piece of kit is the most important part of off-piste skiing. Shovels and probes are essential off-piste kit that should always be carried when leaving the safety of a piste. Although many teams descend without them, what use is a transceiver if you are unable to dig a victim out of the snow once you have located them? Most guides will be able to provide this equipment for their clients.

Before setting out, it is worth asking yourself :

There are always dangers when skiing on glaciers in the high mountains. The main dangers on the Vallée Blanche are crevasse falls and avalanches. Either are potential killers and the descent should not be taken lightly. If you are not sure exactly what you’re doing skiing on glaciers you should hire a mountain guide. Do not attempt to follow other guided parties – they may be taking a much more serious route than the one you intend to descend.