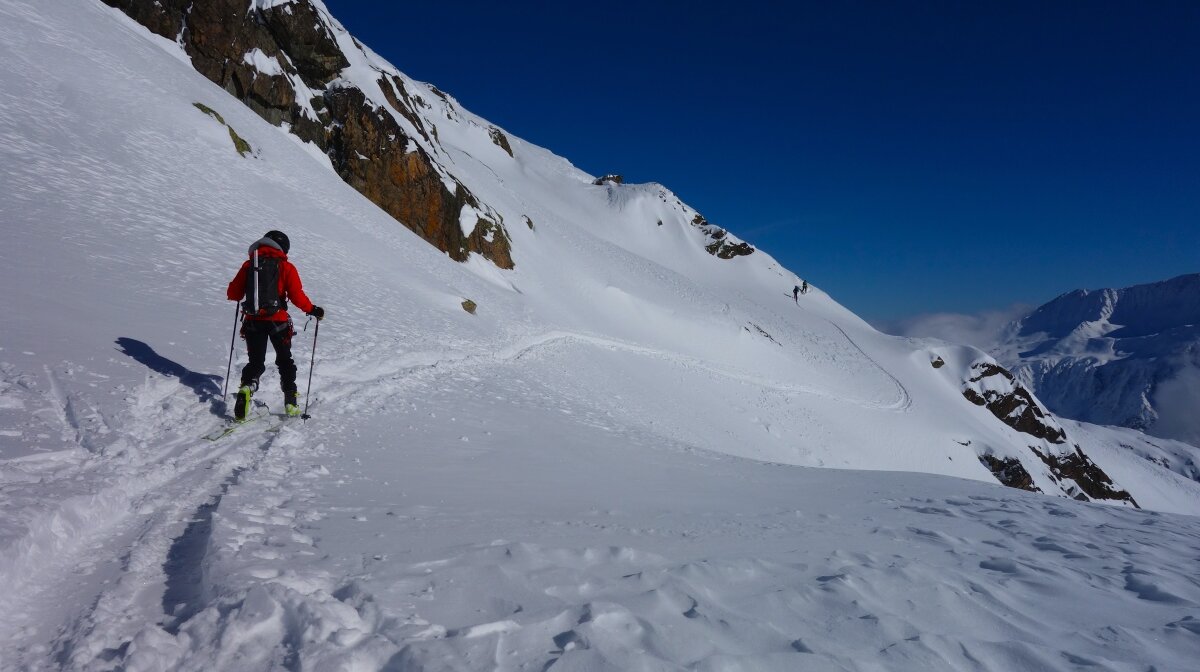 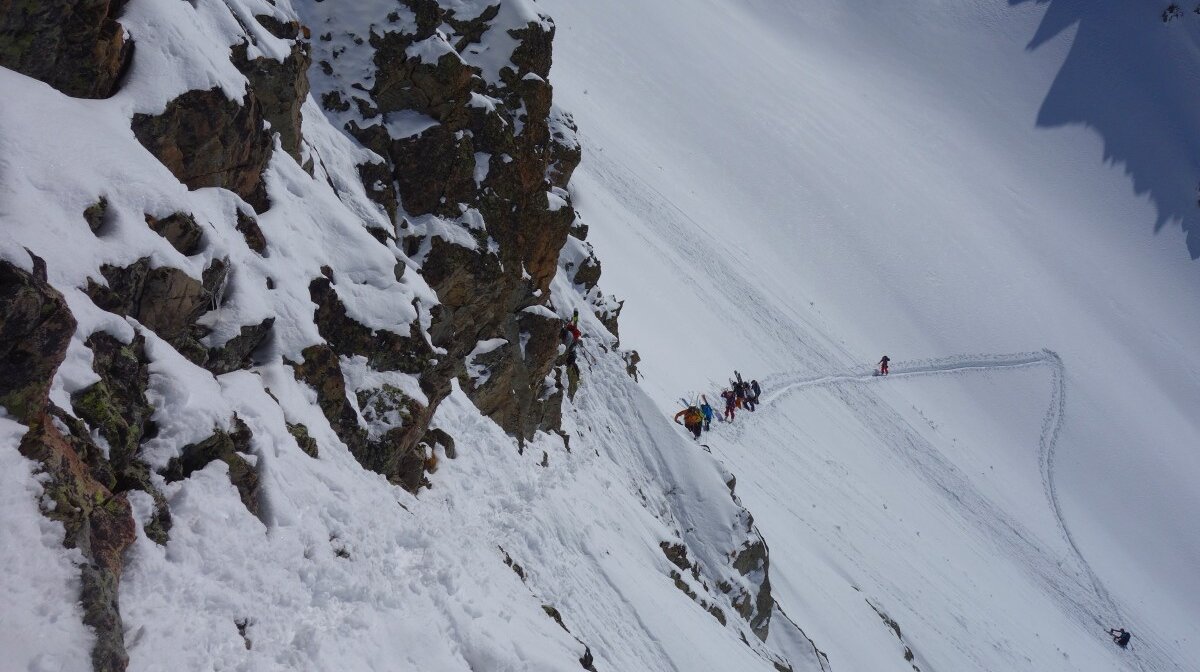 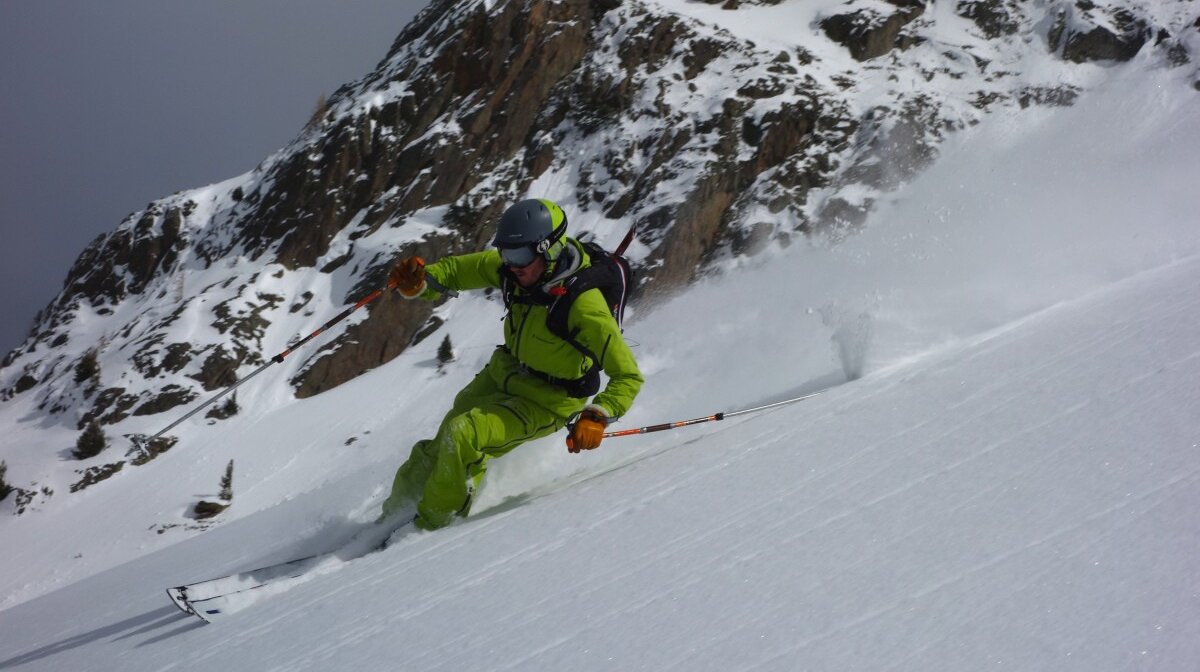 A Skier off piste in Flegere

A Skier off piste in Flegere

La Flegere and Le Tour are known locally as having some of the best natural terrain for freestyle, with gullies that form natural half pipes, rollers, cornices and jumps everywhere you look.

These are just a few suggested routes for backcountry touring from Flegere. They're far from comprehensive but a taster of what’s possible if you want to stray away from the regular pistes. Most of our routes finish in Le Buet which is at the foot of the Berard valley. At Le Buet, you can catch a train back to Chamonix or take the Vallorcine lift if you fancy skiing further and exploring the Le Tour lift system.

There are several excellent guidebooks with descriptions of the many possible routes both within and beyond the lift areas. There are two published by Vamos called Mont-Blanc Ski tours (ISBN 2910672085) and Chamonix Hors pistes-Off piste (ISBN 2910672107); these books are bilingual, in English and French. An even more extensive guidebook with more difficult routes is Mont-Blanc et Aiguilles Rouges à ski (ISBN 2960025520), written by Anselme Baud and published by Nevicata; it’s only available in French but is worth struggling through even if your French isn’t so good as it gives very accurate descriptions and has good explanatory photos. But remember, in the backcountry there are many dangers not least from cliffs and avalanches so you should always hire a Chamonix guide.

If hiking isn’t your thing but you love powder then heli-skiing/boarding could be for you. Whilst helicopter drop-offs of this nature are illegal in France (as you land on National park), Chamonix is well located with plenty of companies offering heli-drops on the Mont-Blanc massif just over the border in either Switzerland or Italy.

The Col des Crochues at Flegere gives access to the Col de Berard (easiest), Berard Breche and Glacier Mort (hardest) routes. Take the cable car up from Les Praz, the Index chair and then the Floria drag lift. From there the Col des Crochues looks right up the hill. The skin to the top takes on average 40 minutes for those with a good level of fitness. The top section becomes quite steep so you'll need to bootpack up this (It’s not normally necessary to use crampons in this section). On warm spring days, this climb can be prone to wet snow slides so this route is best done early in the morning.

Route 1 : Col de Berard For the Col de Berard it’s a long traverse skiers right from the Col des Crochues. You should try to stay as high as possible on the traverse until you reach the flat section and can go no further. (Something to watch out for on the traverse is the risk of avalanches from the slopes above. These slopes catch the sun and warm up and inevitable slide on to the traverse below, if caught in one of these slides you could possibly be carried over the cliffs below sections of the traverse). If you take this traverse too early in the morning it can be icy and difficult, the trick is to catch it just as it’s softening up. From the flat section you can put on your skins and head right to the Col; a relatively short hike of 15-20 minutes to the Col de Berard. You can often expect good snow in the Berard Valley as it slopes are not too steep and the route finding down is fairly straight forward. Continue following the valley down until you reach the trees and river which lead out of the valley towards Le Buet. If you do this route on a snowboard you may find the last section by the river is a bit of a drag as there are short uphill sections where you may have to walk. The path by the river leads all the way down to Le Buet where the Le Buet Hotel offers a rest stop for a well-deserved beer.

Route 2 : Berard Breche The Berard Breche hike is quite a bit longer than the Col de Berard so should only really be attempted if you’re feeling pretty fit. Instead of going to the skiers’ right of the Col des Crochues, you need to climb the ridge to the North. Continue down into the small valley below the flat area before commencing the hike up the wide gully facing, and following on above to the open slopes that lead to the Petite Aiguille de Berard. From there follow the ridge that leads up to the right in the direction of Breche. Near the top, traverse below the ridge to reach the rocky notch, which is the Breche. As you climb up through the notch you’ll see the Berard Valley below. It’s a demanding hike of about 90 minutes but delivers you almost to the very top of the Berard Valley and offers a longer descent than the Col de Berard described above. On the route down beware of the cliff directly below the Breche, you can traverse skiers’ left to avoid it. The rest of the route is open with rolling terrain down to the bottom of the valley where the route out is the same as for the Col de Berard.

Route 3 : Glacier Mort For Glacier Mort (translated as 'dead glacier'), take the Traverse from the Col des Crochues but stop halfway along the traverse and climb the large couloir on the right towards the Point Alphonse Favre. For the lower part of the climb you may need skins or snowshoes but from halfway up where it gets steeper bootpacking is better. At the top of the couloir follow the rocky ridge up to the right. The rocks provide good hand holds on the last steep pitch however if it is icy, crampons are highly recommended. This climb can be intimidating due to the steepness of the latter sections, and also because it was the toughest of the three, but if you’re looking for some great powder, the last little steep slog is definitely worth it. From the top, (which can be cold and windy even on warm days), traverse to the right to avoid the rock band below and then traverse back left below the rocks to the top of the open gully below. The terrain here is superb with most of it shady and protected from the sun. Follow the gully down, making the most of its powder until it opens out from where you follow the valley down to meet the river and trees for the exit to Le Buet.

Other popular routes in the area include hiking out to Lac Blanc where you can head into the Berard Valley via the Col de Belvedere (although be sure to bring the appropriate kit with you as there is some abseiling required) and the Col de Beugeant.

It’s always recommended that you take a mountain guide when you do these routes. Mountain guides have the best knowledge of the snow conditions and dangers involved including the avalanche risks at the time. A guide will make sure that you ride the best snow possible and pick a route that is most suitable for your group.

Take a look at this year's Ski Pass Prices or, if you're not sure which pass to buy, read Ski Pass Options for more information.