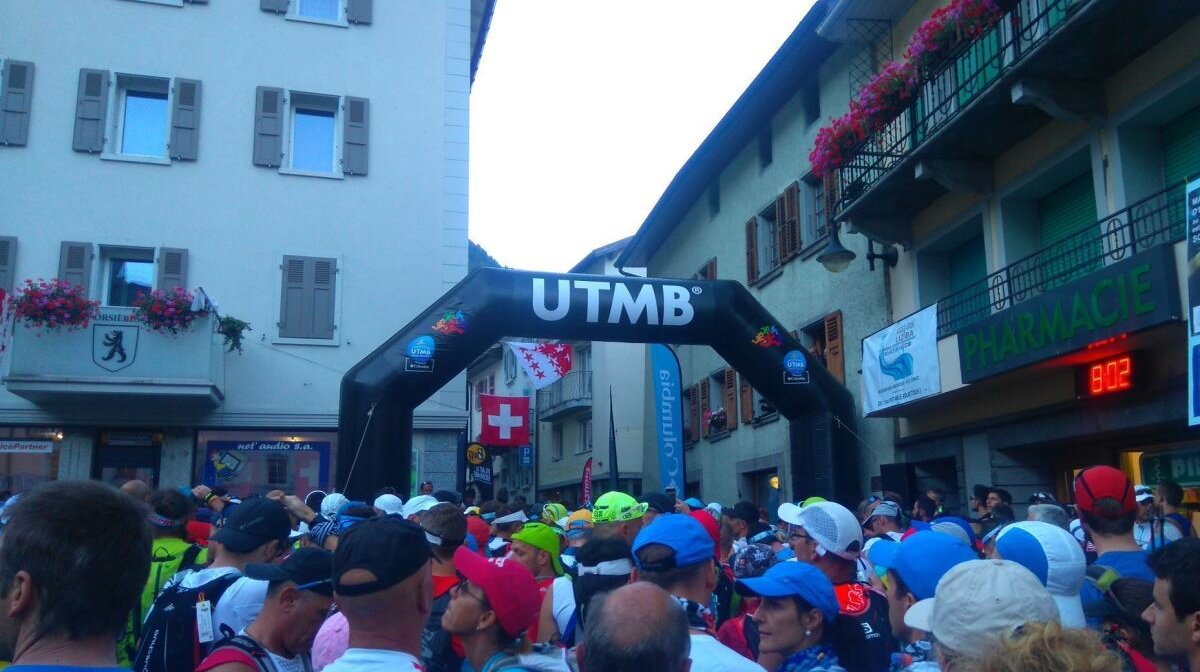 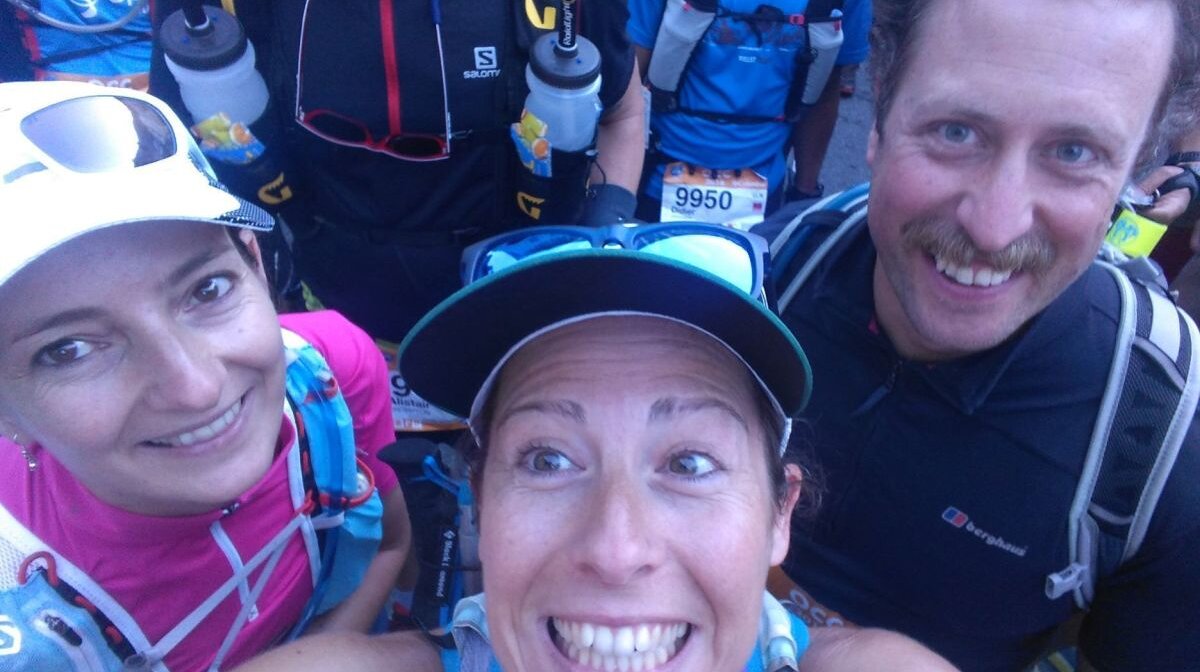 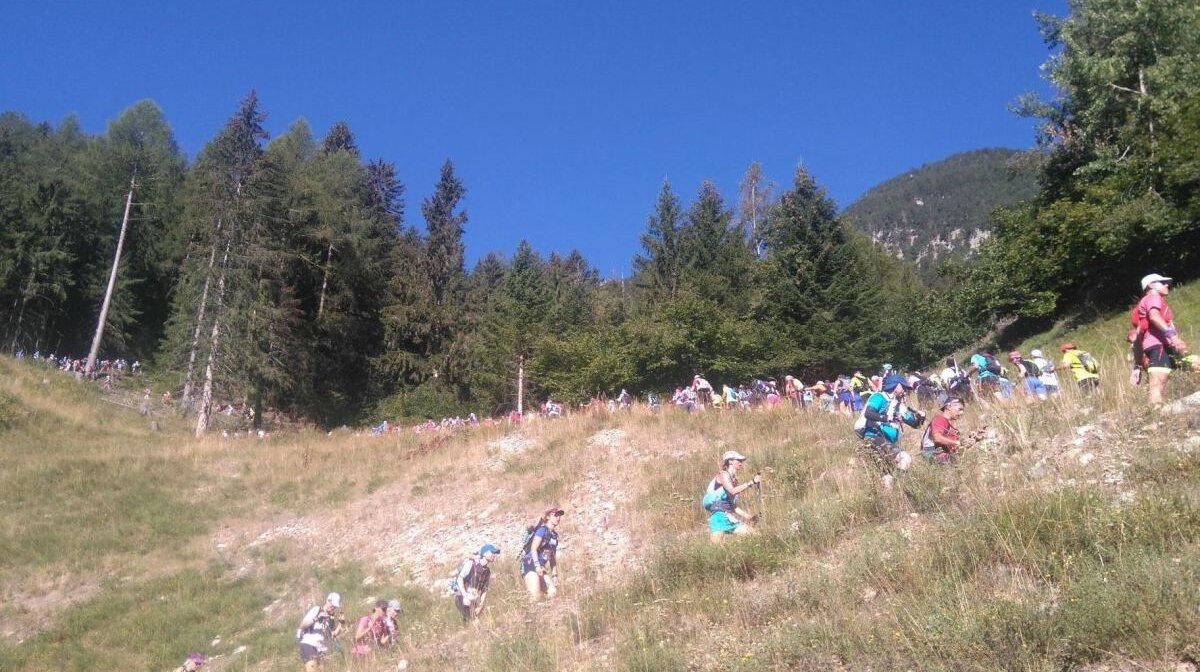 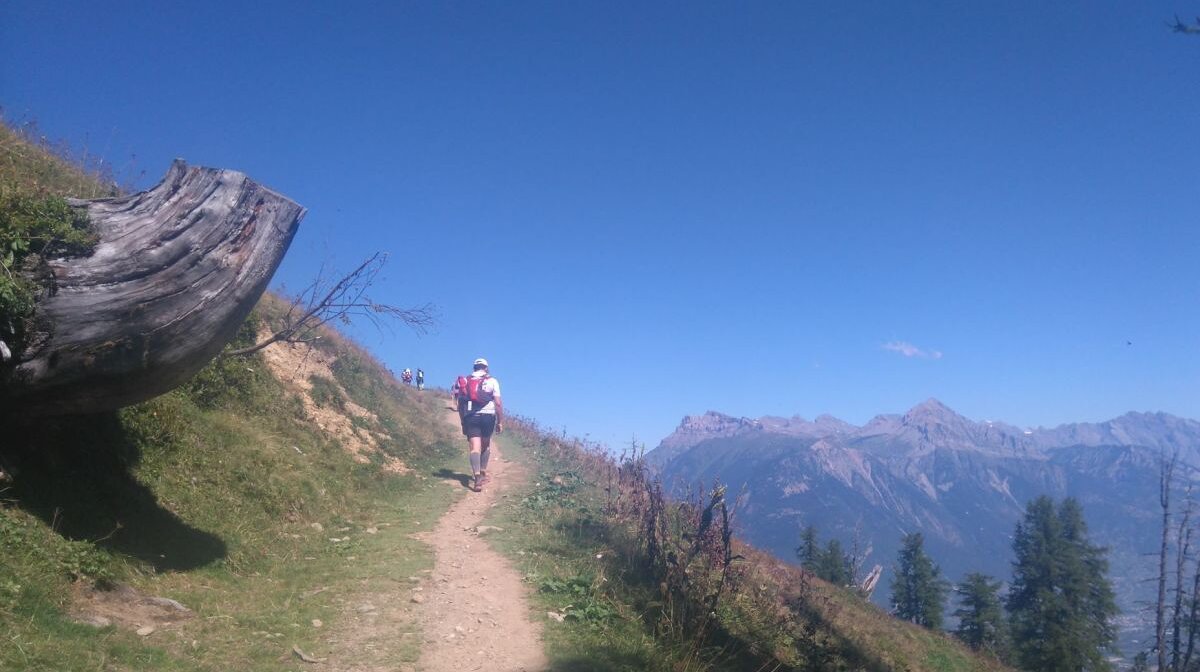 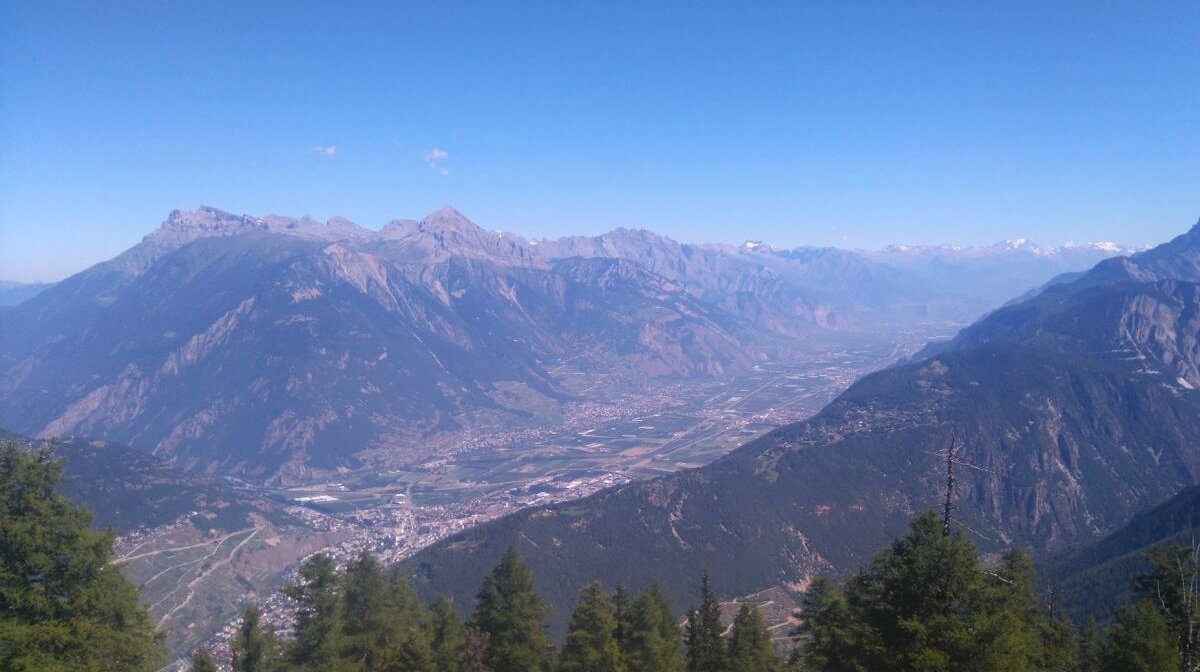 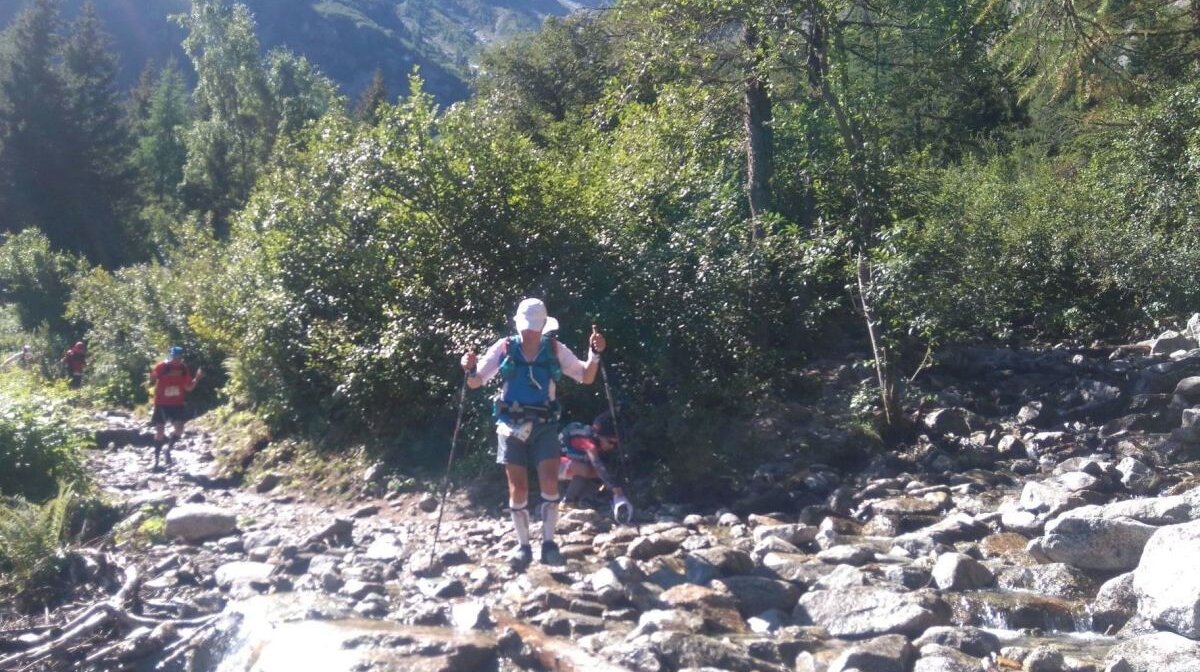 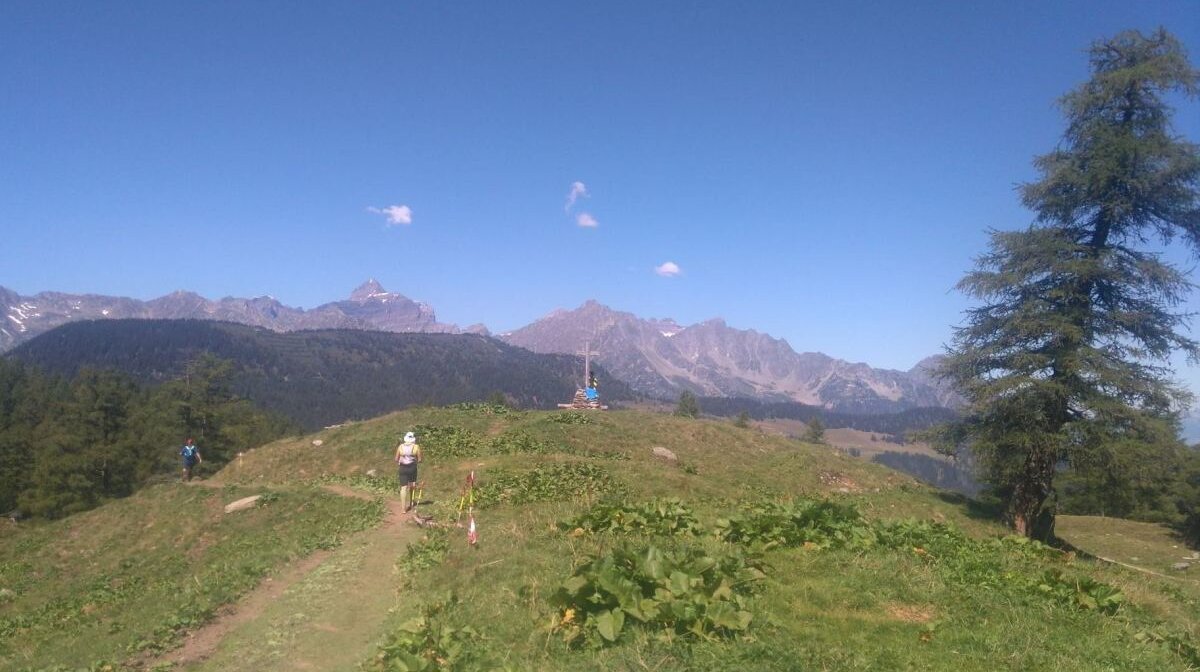 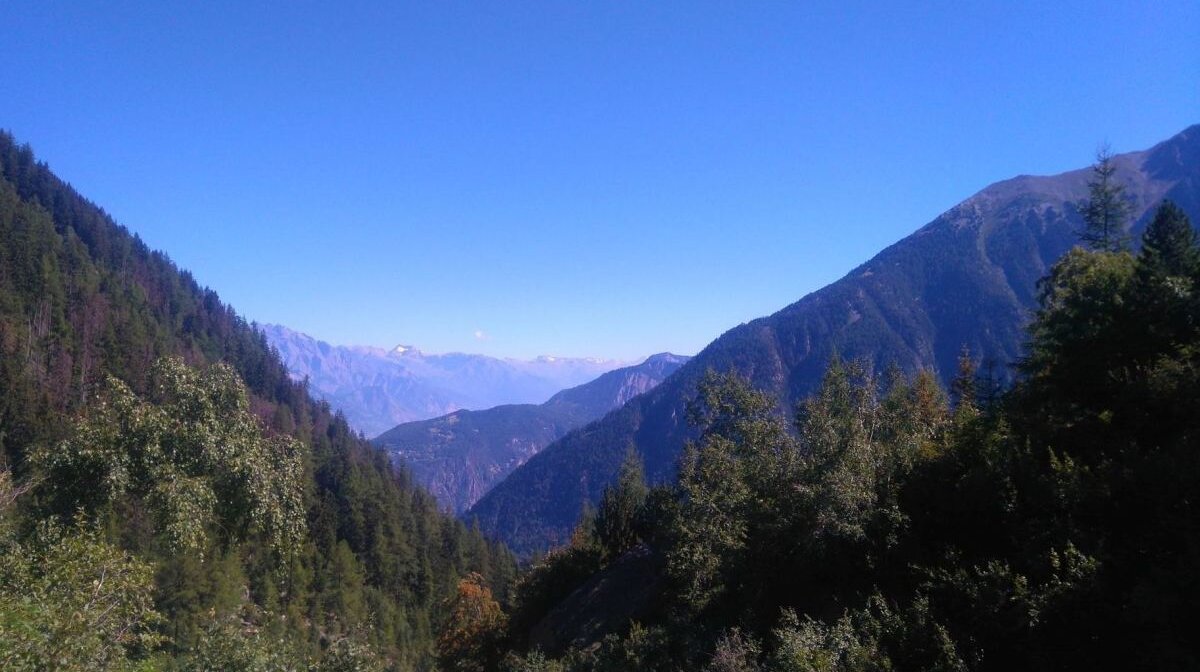 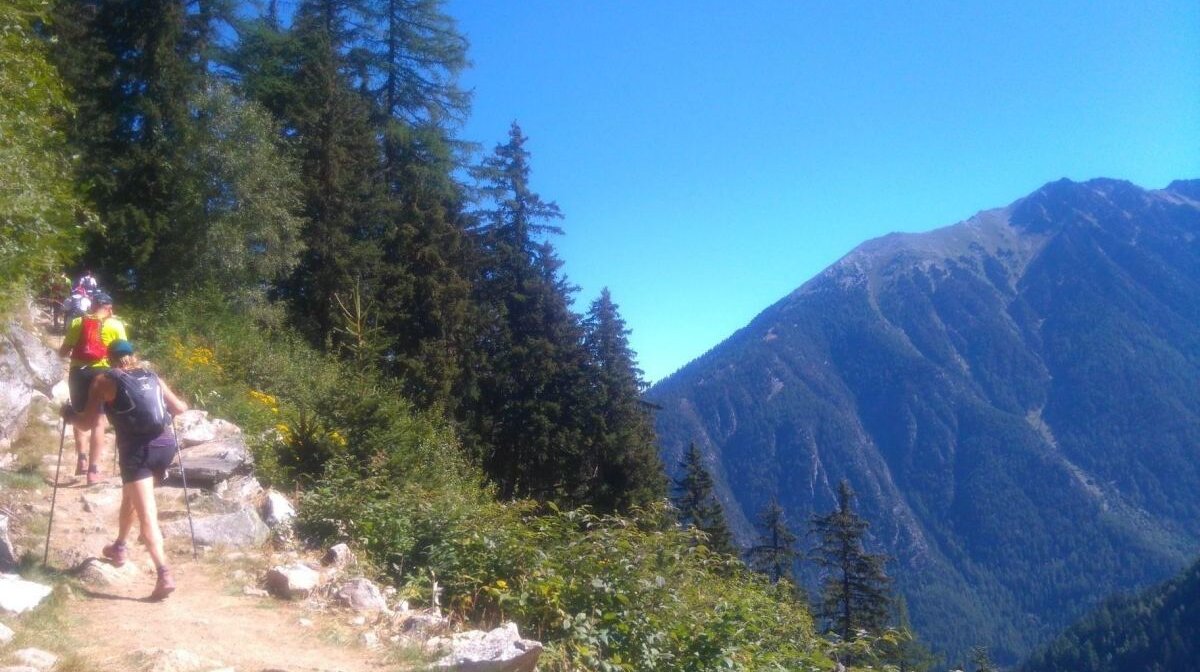 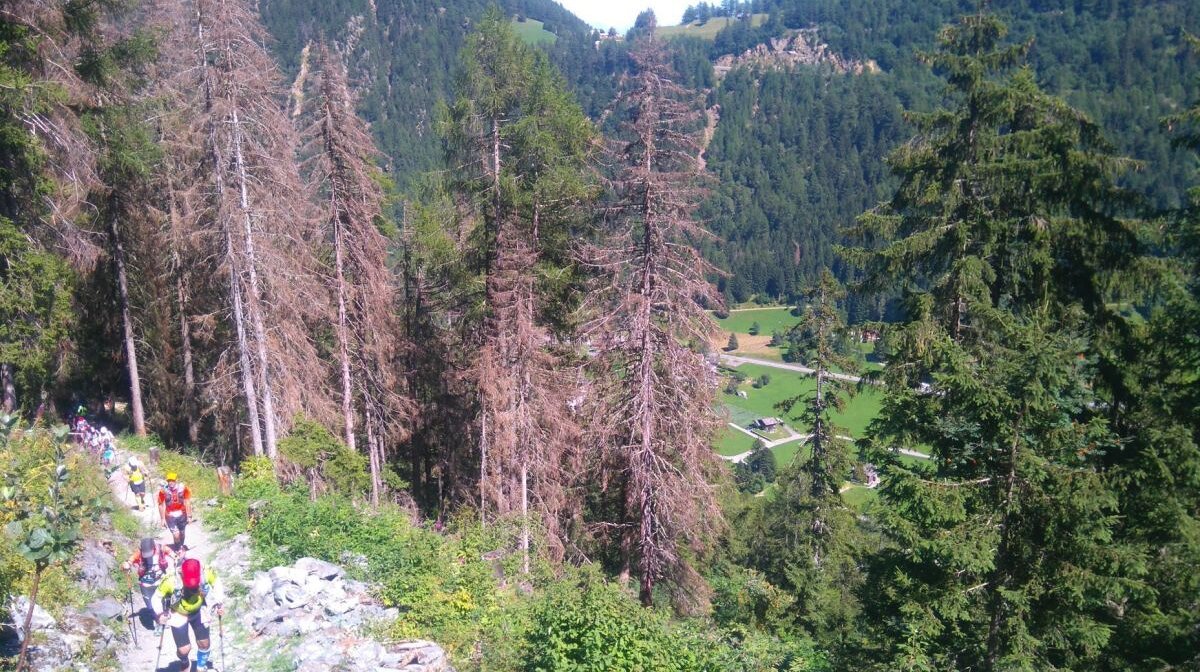 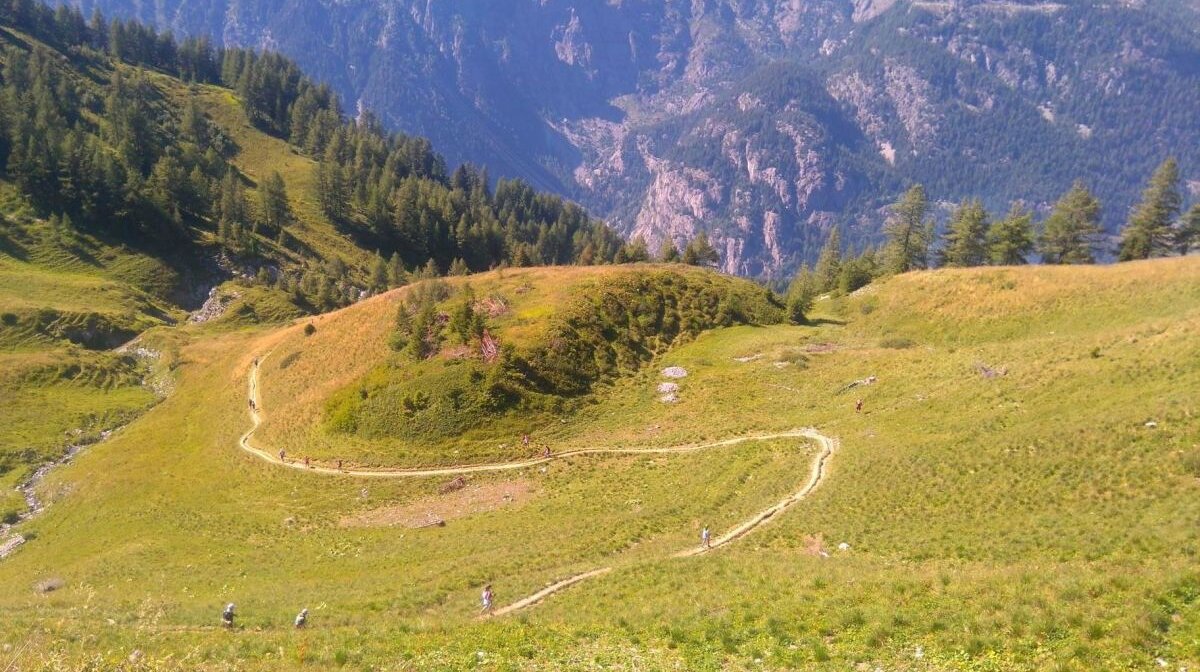 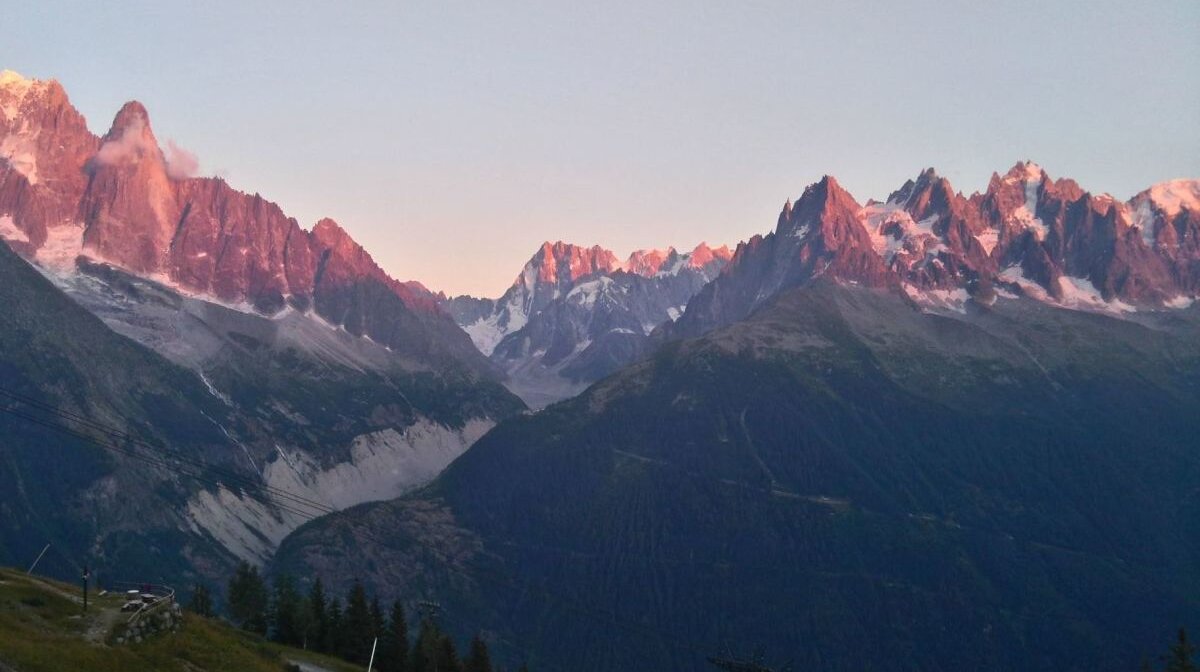 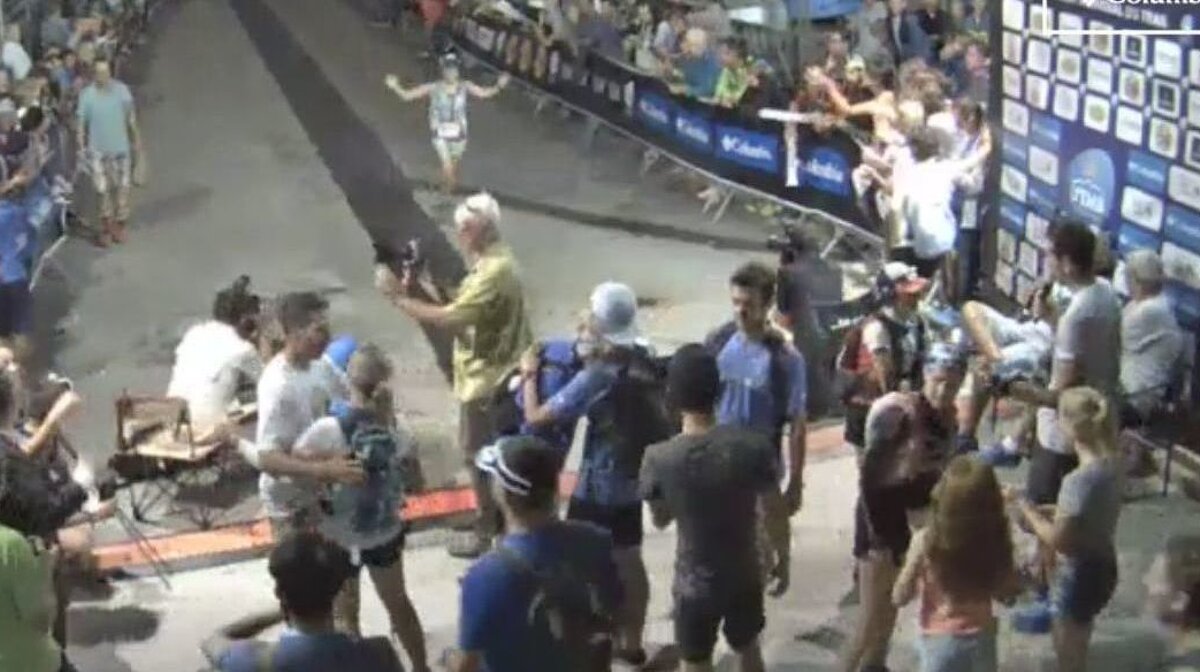 Dragging myself out of bed at 4am and onto a bus at 5:30am goes against every fibre of my being, so there had to be a good reason for putting myself in this situation. Getting to the start line of the OCC is half the battle, in my opinion, so running 55km through the mountains would surely be a breeze after that.

Setting off from the tiny little village of Orsieres felt quite daunting; I’ve never run such a distance before and this was to be my first ultra-marathon. 55km with 3500m of ascent before I was to reach the finish line in Chamonix - could I do it? Only one way to find out…

The route starts as it means to go on - upwards. Adrenaline, excitement and the fact that there were a lot of people watching meant that everyone set a decent pace as we left the village and climbed up a wide track into the forest. School children lined the roads cheering and waving homemade banners, reaching out for high-fives as we ran past.

The first climb up to Champex was relatively gentle but the day was already heating up and making hard work of it. The first aid station was a welcome pause and a reminder that today of all days, we needed to make sure that we ate and drank enough to keep our energy levels up. The lake at Champex was a refreshing sight and it felt good to have a gentle trot before hitting the first big climb up to La Giete via the Bovine trail; a demanding stomp up to an idyllic alpine pasture at 2000m.

The descent from La Giete to Trient was the highlight of the course for me; trotting out of a beautiful plateau and down through rolling meadows surrounded by grazing horses, along narrow winding singletrack into a shady forest, coming out into the sunshine every now and then to cross bubbling streams where many runners were dunking and splashing to cool down. The descent was technical enough that there was fun to be had hopping amongst the rocks and tree roots but it was tame enough that you could pick up a bit of speed and admire the stunning views as you let your legs free-wheel.

Coming into the otherwise sleepy village of Trient put a massive smile on my face. Despite the intense heat, everyone seemed to be having so much fun and the volunteers in the aid station were pumping out classic 80’s tunes as they dished out refreshments. After a quick bite to eat and a lot to drink I strode out of the tent to the inspirational sound of Eye of the Tiger, ready to take on the next climb Rocky style.

Everyone had warned me that the Bovine trail up to La Giete was the climb of all climbs, steep and relentless; so I was quite pleased to find it not as bad as I had dreaded. However, I found the next climb out of Trient and up to Catogne much harder for some reason. Possibly because I was more tired, possibly because the sun was beating down even hotter, possibly just because after a while your mind starts to talk you into a right old pickle.

Anyway, never have I been so glad to reach a checkpoint as I was at Catogne. Especially when I found that the volunteers had rigged up a garden hose to spray us with cold water as we ran past - bliss! The temperature by this point has reached about 36ºc, many people were struggling with the heat and it was ridiculously tough trying to keep a decent pace without knackering yourself. Parts of the route, particularly on the climbs, were littered with runners flaking out and keeling over.

The descent down to Vallorcine was starting to tell on my knees, little niggles were now turning into persistent grumbles and I was finding it less easy to relax and go with the flow. Not a problem for the guys above the final descent though who were happy to cheer on the runners from the comfort of their hot tub, beers in hand. I declined their invite to join them as I had the small matter of 18km to deal with. However, had their tub been filled with ice rather than hot water, temptation might have proved too much to resist…

Arriving in Vallorcine felt like being back on home territory - back in the valley and hitting trails that I’ve done many times before. A quick sploosh in the water trough and I was off again, repeating my mantra of “one more up, one more down, then the finish line”. Oh, I made it sound so simple!

Trotting through the relatively flat meadows of Vallorcine and alongside the river to Buet, I had convinced myself that I was almost home and dry. Just “one more up, one more down, then the finish line” to deal with. However, it wasn’t until I’d crossed the Col des Montets and started the climb up to Flegere that I had a crushing realisation… it wasn’t just one more up and one more down at all. There was a short but horribly steep and knee punishingly technical descent to contend with on the way up to Flegere that I had already encountered (and hated) during the Marathon du Mont Blanc back in June. Grrrrrrrrr!

I minced, winced and groaned my way amongst the boulders and rocks to drop down only 300m and then begin climbing back up to the final checkpoint at Flegere. Thankfully the sun had now disappeared over the mountains but the air was still stiflingly warm and muggy. Judging by the muttering and cursing going on around me, many people were by now having quite a sense of humour failure. Finally reaching the smiling faces of the volunteers at the aid station was a blessed relief, as was the thought that from now on the only way was down.

The light was starting to fade as I left Flegere and the peaks of the Aiguilles Rouges were living up to their name, bathed in soft pink light. A steep drop down to the trail and then we were amongst the trees once more, where it rapidly got a lot darker. The beam on my headtorch wasn’t great and I figured that I’d rather try and keep pace with other people than start fumbling about in the dark for spare batteries and risk being left on my own.

It seemed that other people preferred company in the dark as well. We formed a little crew of about half a dozen and stayed within range of each other, not really speaking much but silently communicating as we adjusted our pace to a steady rhythm and pointed out obstacles to each other as we jogged through the dark. The street lights of Chamonix were a welcome sight as we emerged from the forest, knowing that we would soon be crossing the finish line.

Coming into Chamonix was almost a little overwhelming; the last few hours had been such a mental battle and often quite isolated. It seemed as if I had suddenly been plunged into crowds of cheering people, flashing cameras, loud music, commentators blaring out over loudspeakers, applause, children reaching out for high-fives… for a moment I felt like I had won rather than scraped through!

Seeing friends waiting at the finish line was a great moment - some had met me along the way, even running the last few hundred metres with me to keep my spirits up (and to make sure I was actually going to finish), others had completed the race themselves and despite being utterly cream crackered had waited to cheer me over the line. So, could I do it? Apparently I can! Would I do it again? Possibly... probably... but please not on such a hot day!

Huge congratulations to everyone who took part in any of the UTMB events this year; as if it isn’t tough enough already, the extreme heat definitely added an extra element of punishment. To anyone who was inspired by the ultra runners this week, you can register for next year’s UTMB here from 15th December 2016 to 4th January 2017.