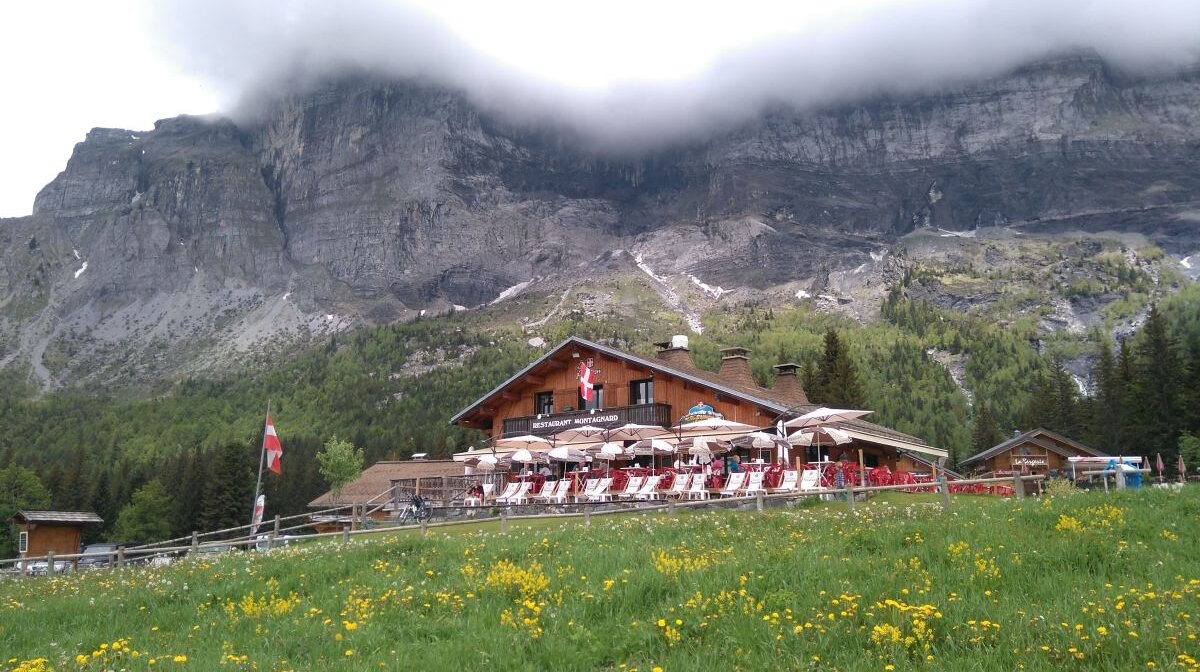 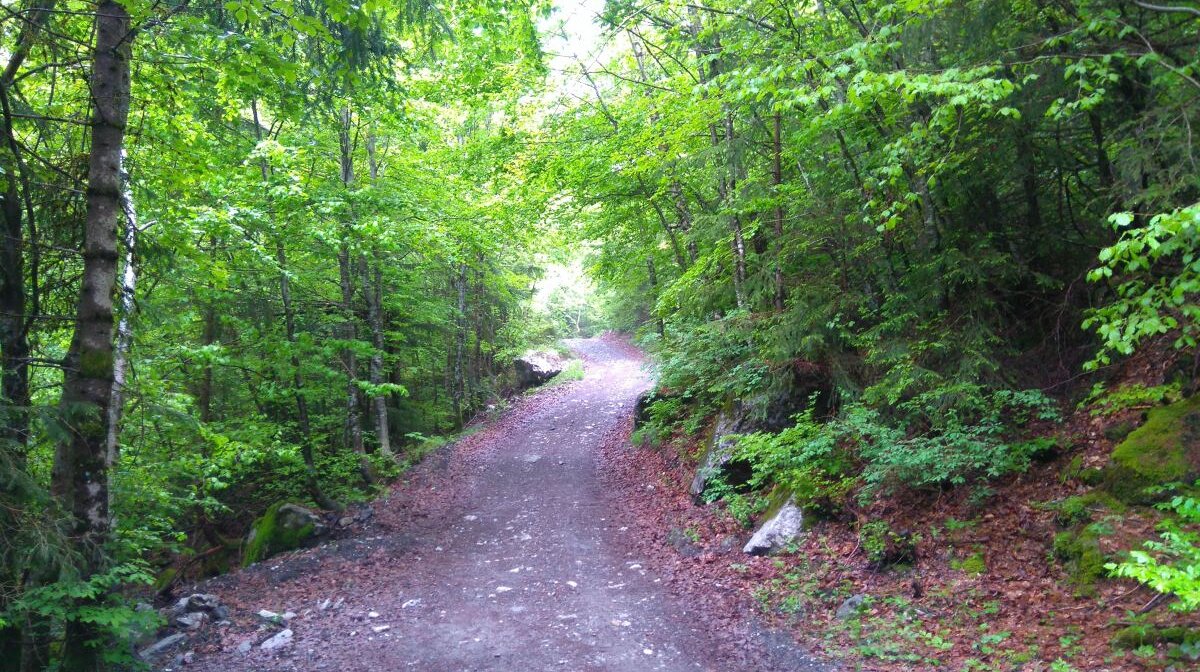 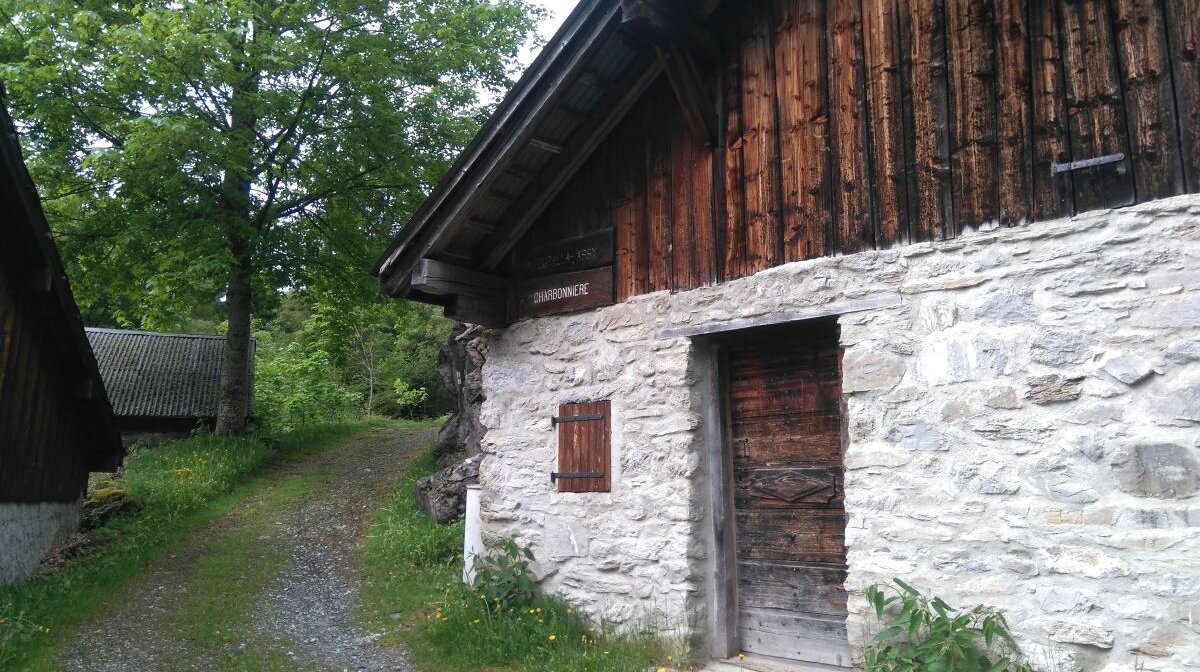 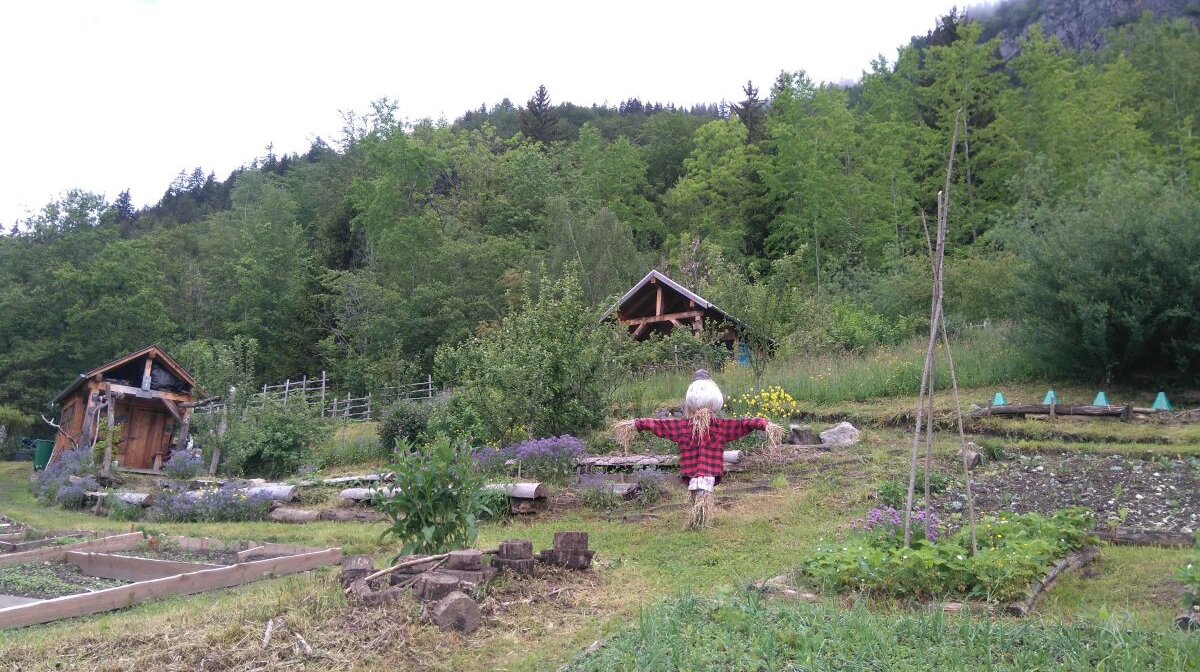 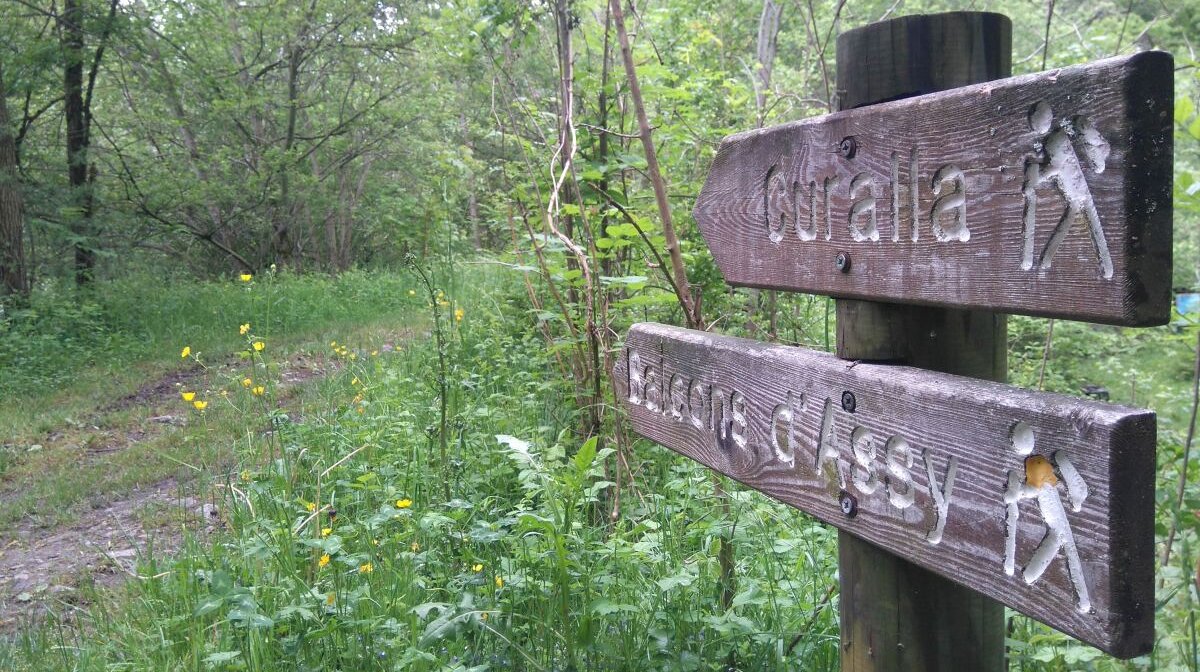 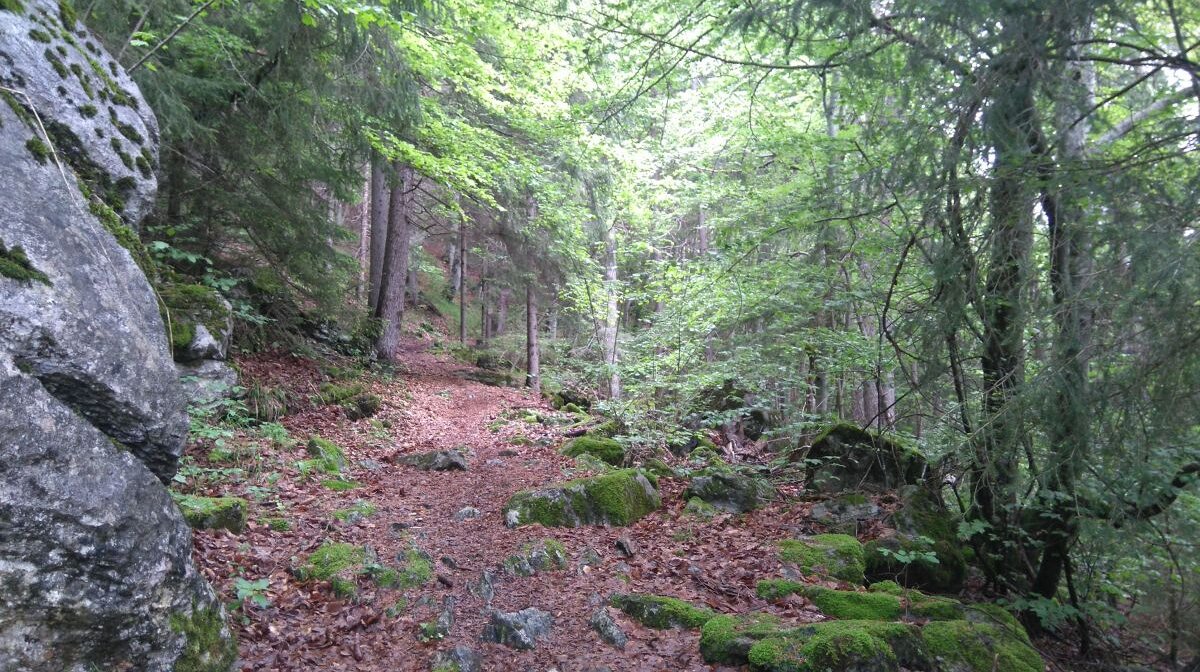 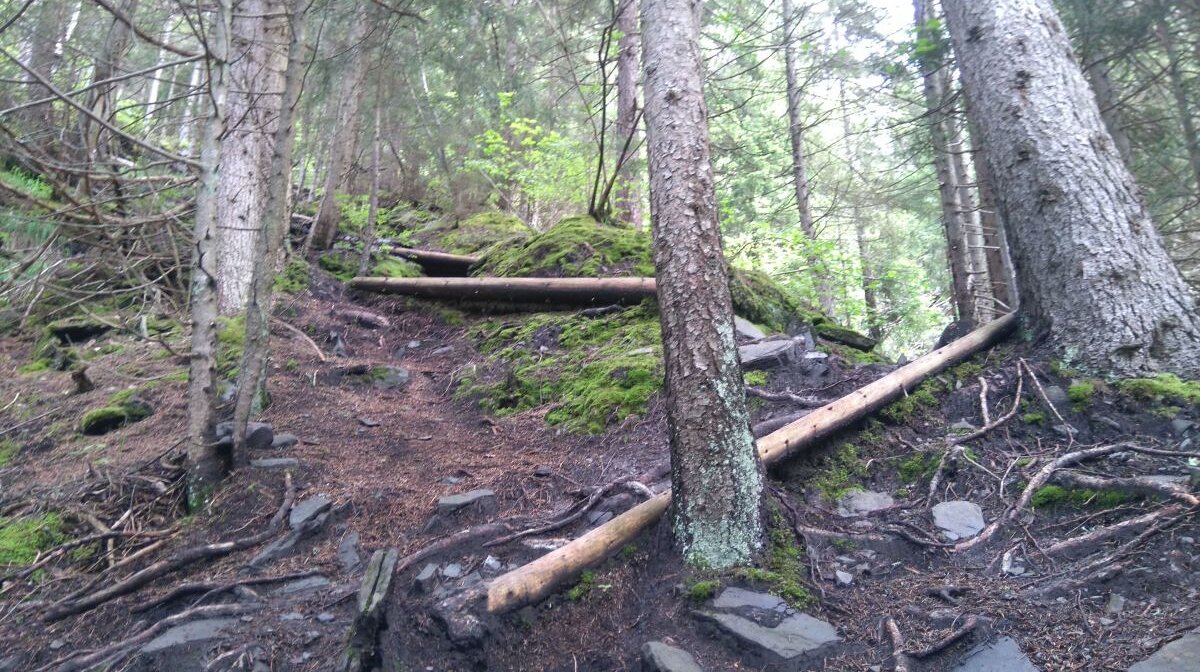 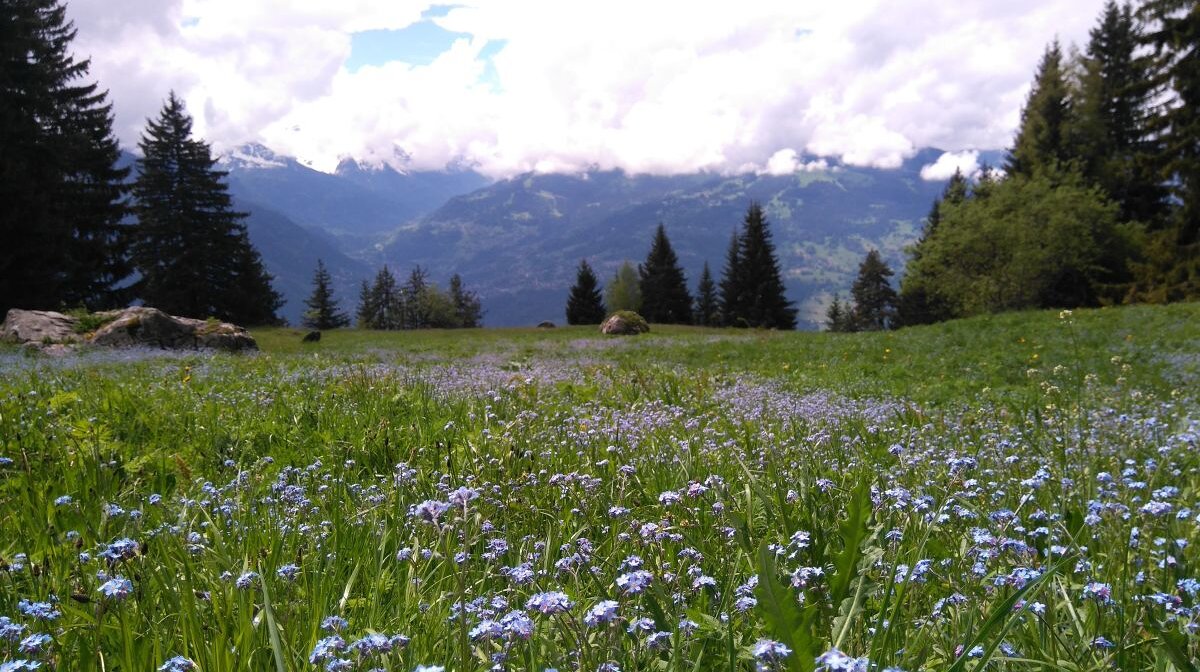 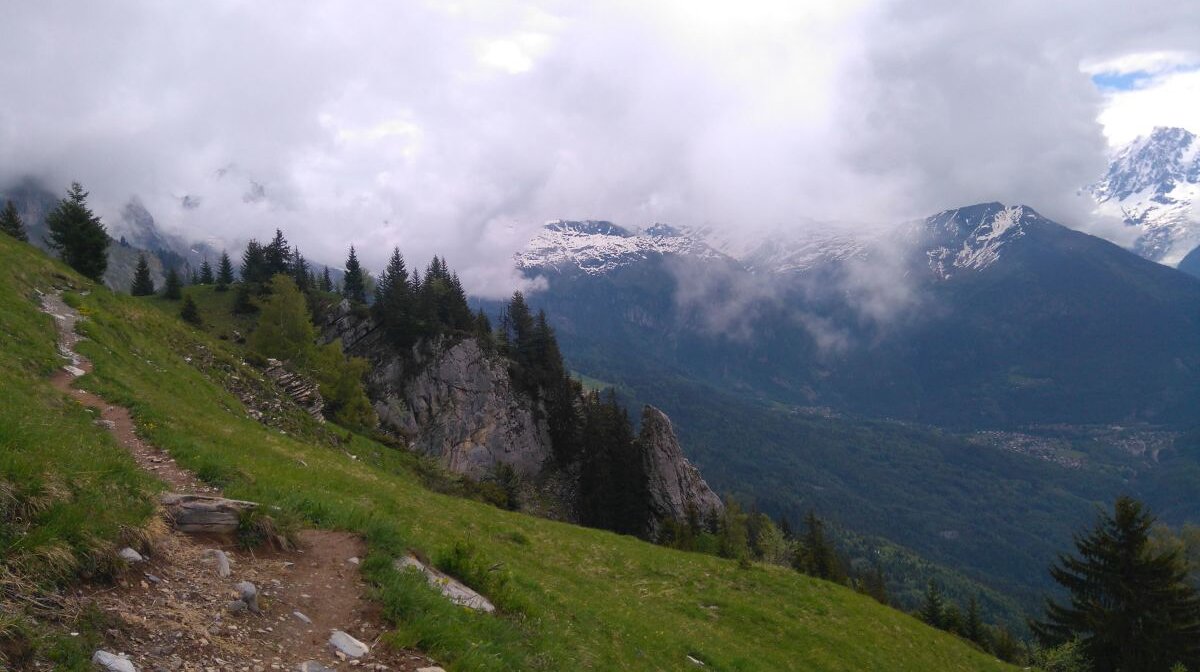 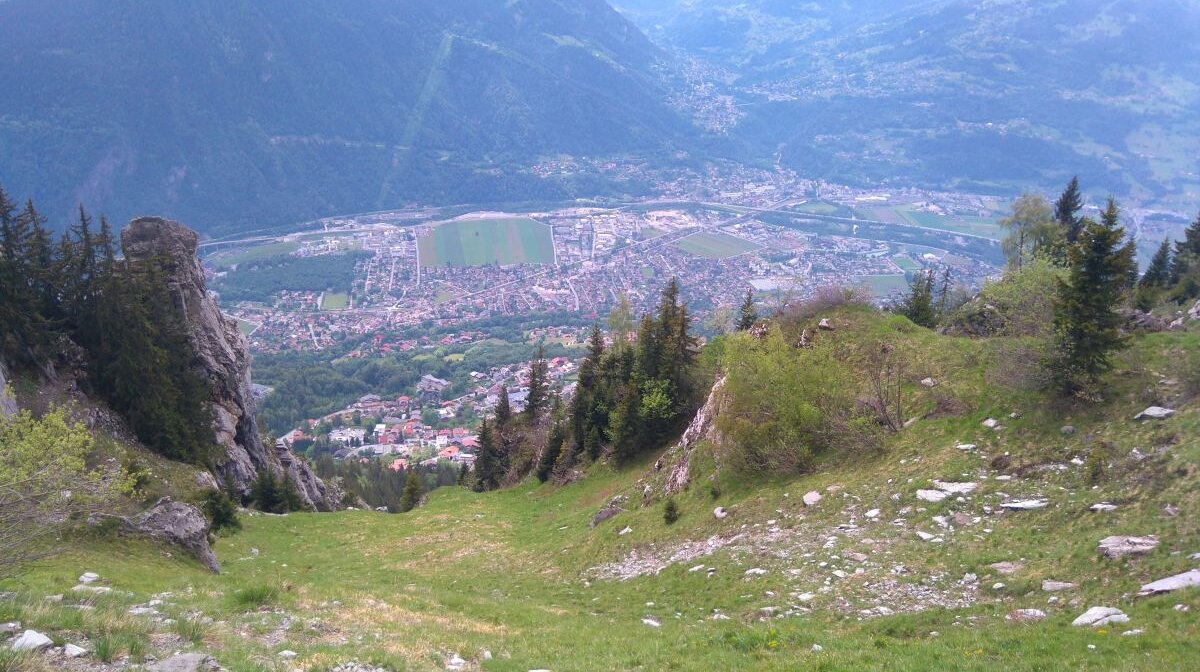 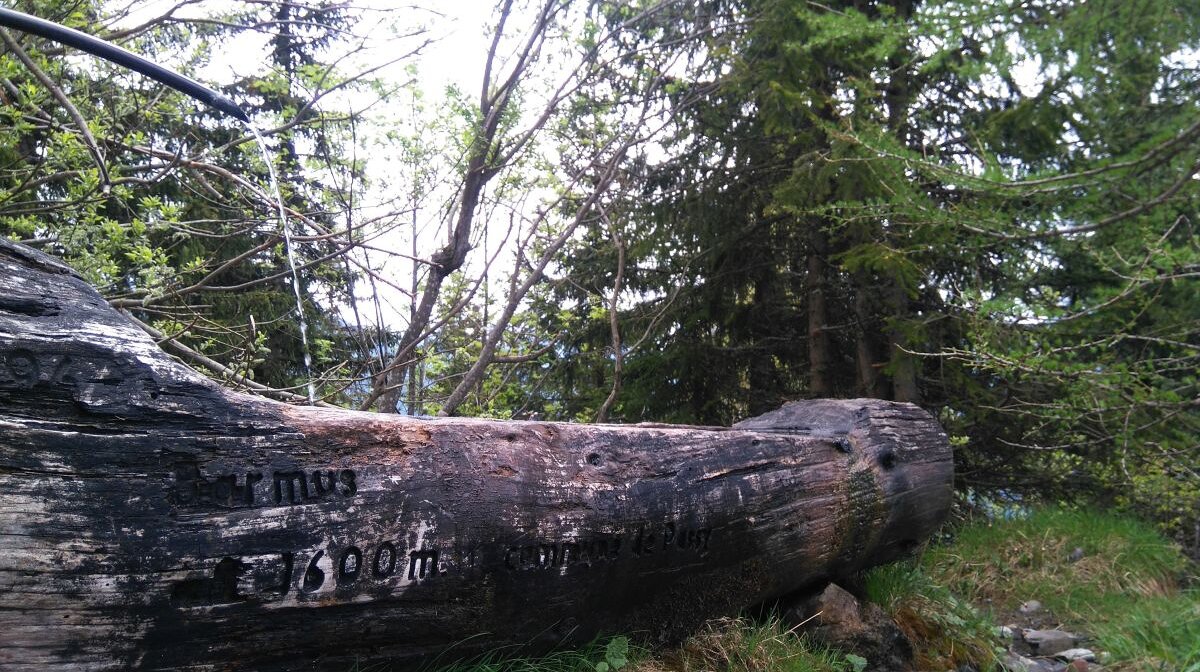 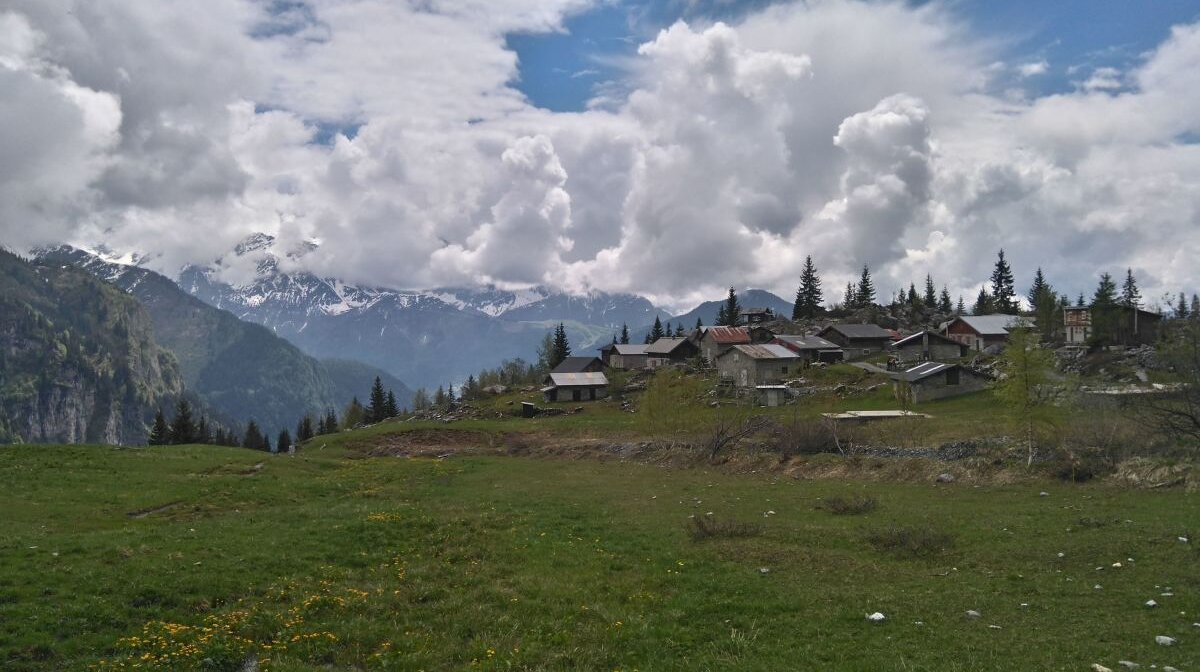 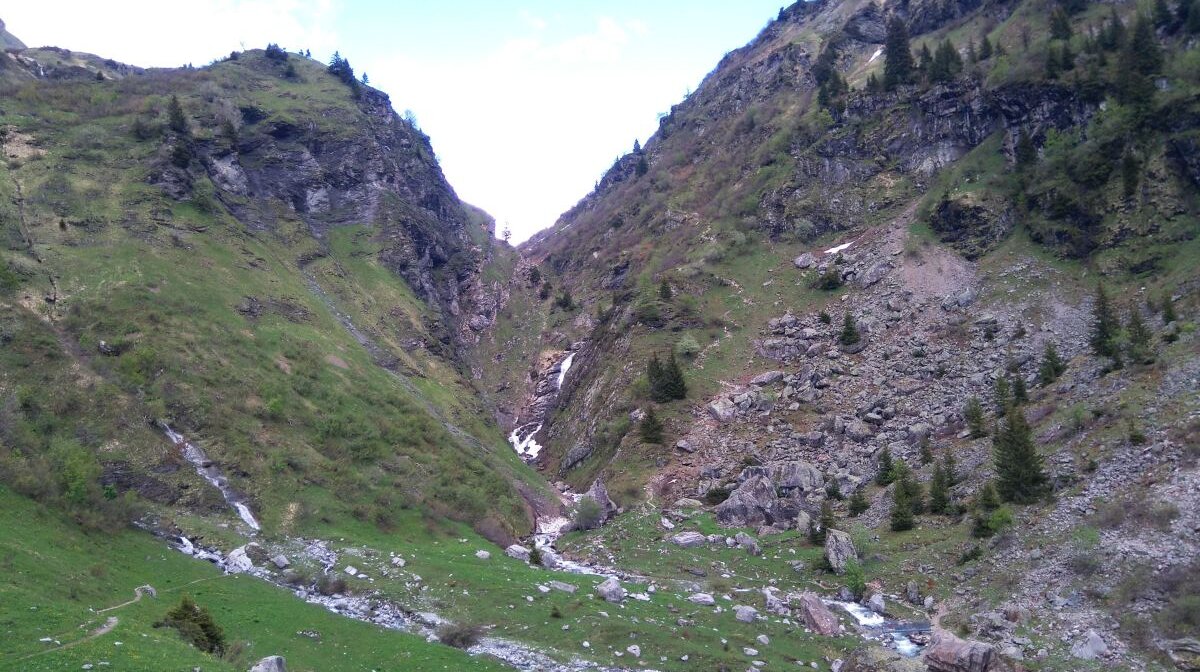 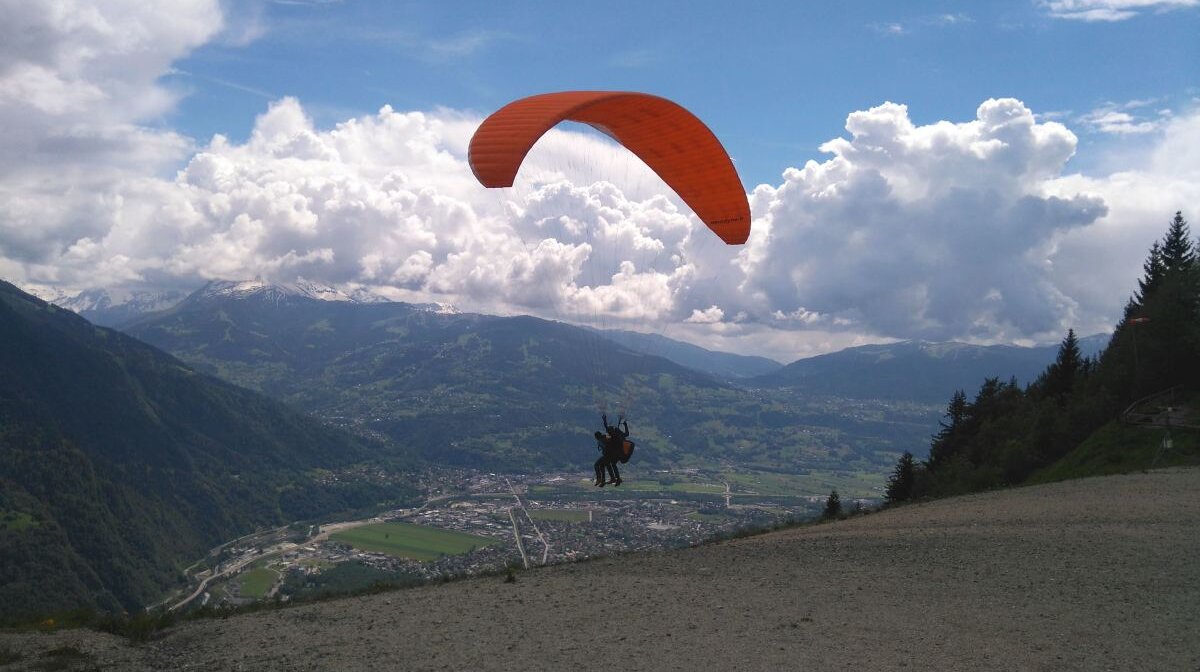 The Balcon des Fiz is the shortest of the Trail du Tour des Fiz series, clocking in at 22km with 1500m of positive gain. It’s a fun introduction to trail running and is mostly over fairly non-technical terrain, but it’s no walk in the park and will definitely put you through your paces.

The race starts from Plaine Joux, a large sunny plateau above the town of Passy, surrounded by forests and overlooked by the mighty rock face of the Rochers des Fiz. The route is a figure of eight shape, which means that you pass back through Plaine Joux about halfway through. It’s a great place for spectators as there are a couple of restaurants with lovely big terraces, pretty meadows and lots of hiking trails if they want to go for a wander. There is also a parapente take-off site, so they can watch people launch themselves off the side of the mountain and (hopefully) float gently off across the valley.

The race starts off tamely enough with a gentle jog back down the road and past the ugly pink edifice of the Guébriant holiday village, shortly after which you swerve off to the right and take a track signposted for Charbonnière. A lovely rolling path with some cruisy downhill and a bit of ascent brings us across a roaring waterfall via a footbridge and into a little clearing where you’ll find a couple of old chalets; this be Charbonnière and you’ll be back here again later. The path splits into two here, take the lower one to your left and follow the signpost down to Plateau d’Assy. A fairly wide and springy trail twists down through a cool green forest, bringing you out by the entrance to the Jardins des Cimes. Watch out for the wooden footbridge, I can confirm that it is rather slippery since coming impressively close to doing the full splits as I ran across it. The trail then spits you out onto an asphalt road where I had a bit of route-finding confusion and dropped down to the main road, where I then spent half an hour helping an old man to coax a marauding pony back into the field from which it had escaped. To avoid getting embroiled in such a scenario, turn right and follow the actual race route along a wide track, past some allotments to a wooded area and pick up signposts for Curalla.

After a nice little trot along a fairly level trail you’ll start to climb up into the forest along a narrow track; it starts off fairly gently but gradually gets steeper and steeper until you’re clambering up tight switchbacks that feel almost vertical. There is a brief respite once you reach the Chalets de Curalla at 1480m; a pretty little cluster of stone buildings surrounded by lush meadows carpeted with bright blue flowers. Gird your loins though (whatever that means), as the ascent is by no means over.

Follow signs to Frioland and keep on pushing those legs until you reach the highest point of the course at almost 1700m. The climb up to Frioland is without a doubt the toughest of the course, so once you’ve reached the ridge take a few deep breaths, lift your head to take a mental photo of the incredible view and give yourself a big pat on the back for having beasted your way up 650m of steep ascent.

The trail flattens out for a bit and bimbles along the mountainside, dropping off sharply to your right with the giant rocks of the Fiz towering above to your left. The view is fantastic and whilst up here I spotted a few marmots waddling about - although they’ll probably all go into hiding on race day, shy little critters that they are. There is quite a sharp and rocky descent back to Charbonniere but then the terrain evens out again and becomes quite pleasant as you return to Plaine Joux.

Once back at Plaine Joux, the route crosses over and heads back uphill into the ski area, which is thankfully now completely clear of snow. You’ll be pleased to know that the second half of the route is a breeze compared to the first half and you’ll probably do it in about half the time. There’s a long steady climb up past hibernating ski lifts to reach the Chalets de Barmus at 1600m. From here the rest of the route is almost all downhill, on a gentle gradient and over forgiving terrain - so let your legs stretch out and enjoy the ride!

This is definitely a race of two halves, with the second half feeling like a completely different ball game to the first (any more dodgy sports analogies?). Gone are the narrow tracks and dense forests; in their place are wide 4x4 paths, open meadows and sweeping vistas. If race day is sunny then slap on a load of sun cream for this part, as it is very exposed and sweaty skin burns quickly.

The second loop circles round, using charming little hamlets of remote chalets as milestones. Shortly after Le Barmus you’ll see a sign pointing right for Le Chatelet. Although this is ultimately the direction in which you’ll be heading, this is only a shortcut and NOT the official route, so do NOT follow it, just continue straight on.

Before long you’ll come to more stone chalets at Les Ayères des Pierrières, continue past them and after you’ve crossed a second small stream take the wide grassy path on your right. Do not do as I did and continue upwards until you hit snow, you’ve done quite enough ascent already. The correct trail drops gently down past the Chalets du Souay, where a number of waterfalls all meet to crash rather dramatically into a river at the foot of the mountains.

From here it’s downhill all way to Lac Vert, via a wide and pleasant footpath through meadows and trees. You’ll skirt round the emerald green waters of the lake and find yourself crossing over a road to pick up the trail on the other side, where you’ll see the joyful news that it’s only 20 minutes (at average walking pace) back up to Plaine Joux. I know, I’m sorry, but yes… up. Don’t panic though as it’s a gentle ascent, so give those legs a good talking to and focus on that finish line - you’re almost there!

There’s no escaping the fact that this route packs around 1500m of vertical into the relatively short distance of just 22km, but because it’s split over so many ascents and descents it doesn’t feel quite so brutal as some of the other trail races. The fact that it loops round in two halves makes it quite nice to train for, as you can do one half one day and the other half another day if you get chance. I got lost a number of times recceing this race, as a lot of the trails are unmarked, so if you get the chance to run it before race day make sure you have a trail map and don’t forget to download the GPX map below - it saved me from going too far astray many times! However, the route will be clearly marked on race day and there’ll be plenty of other runners to follow. Unless you’re at the front, which is not something I need to worry about…