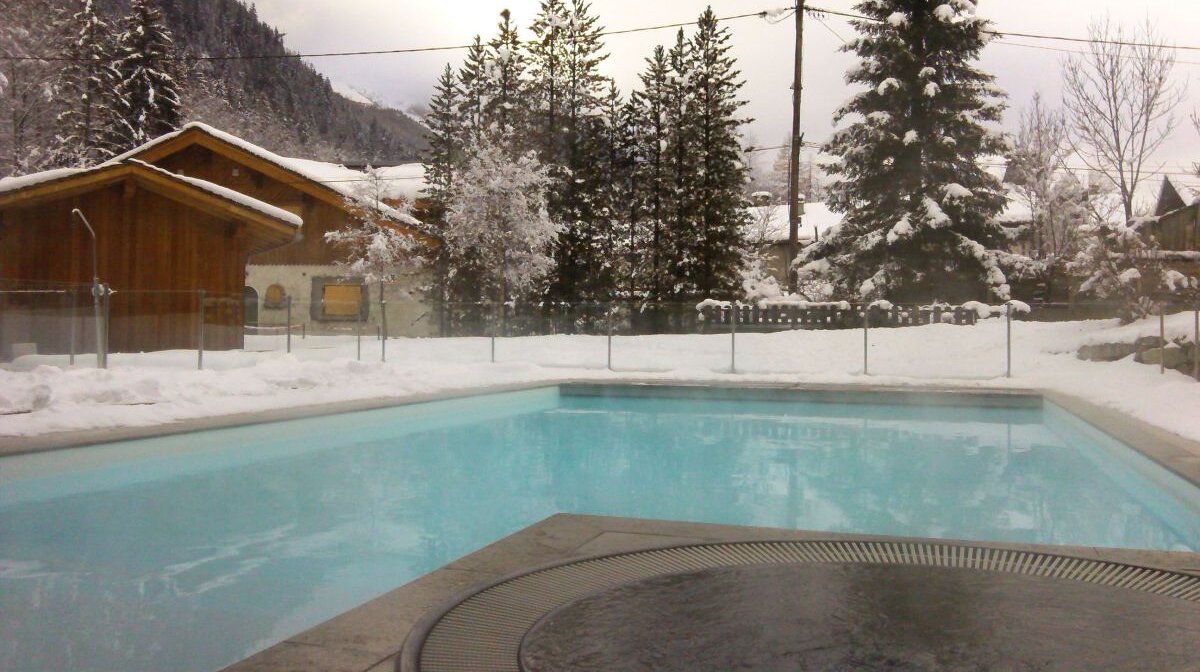 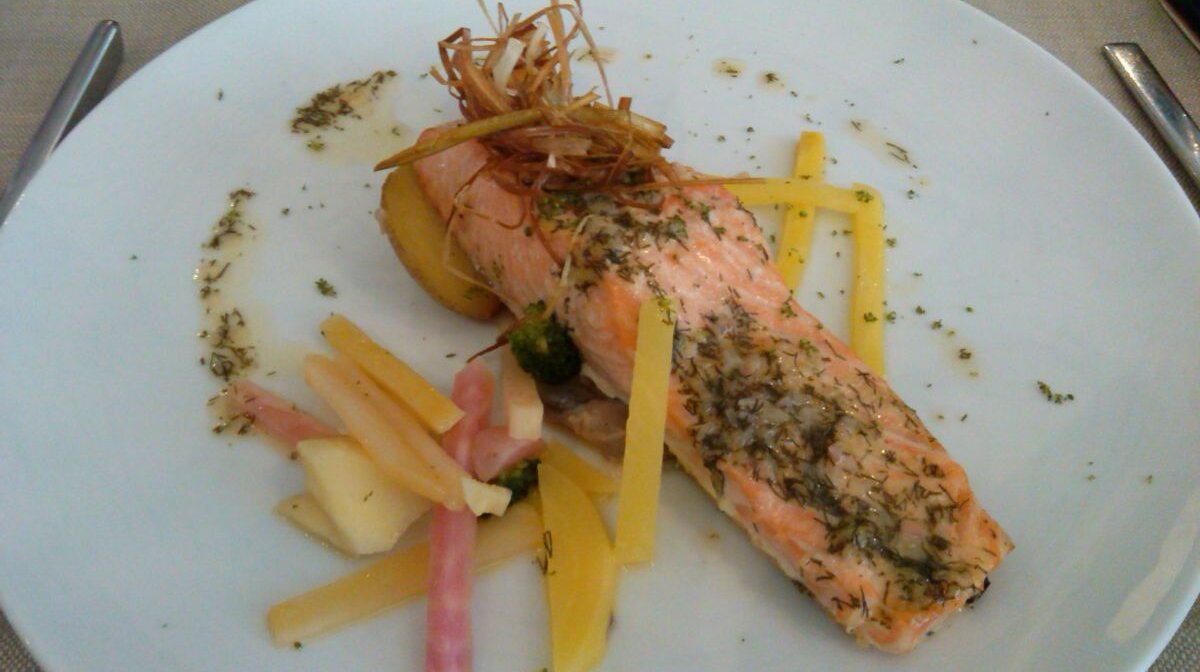 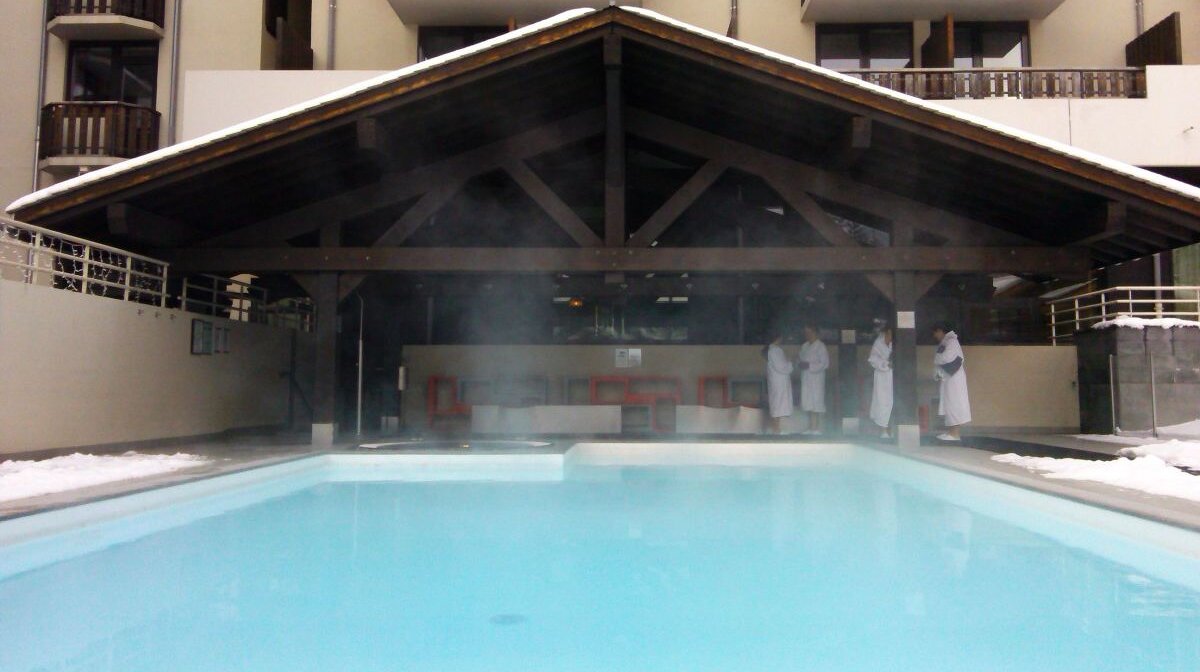 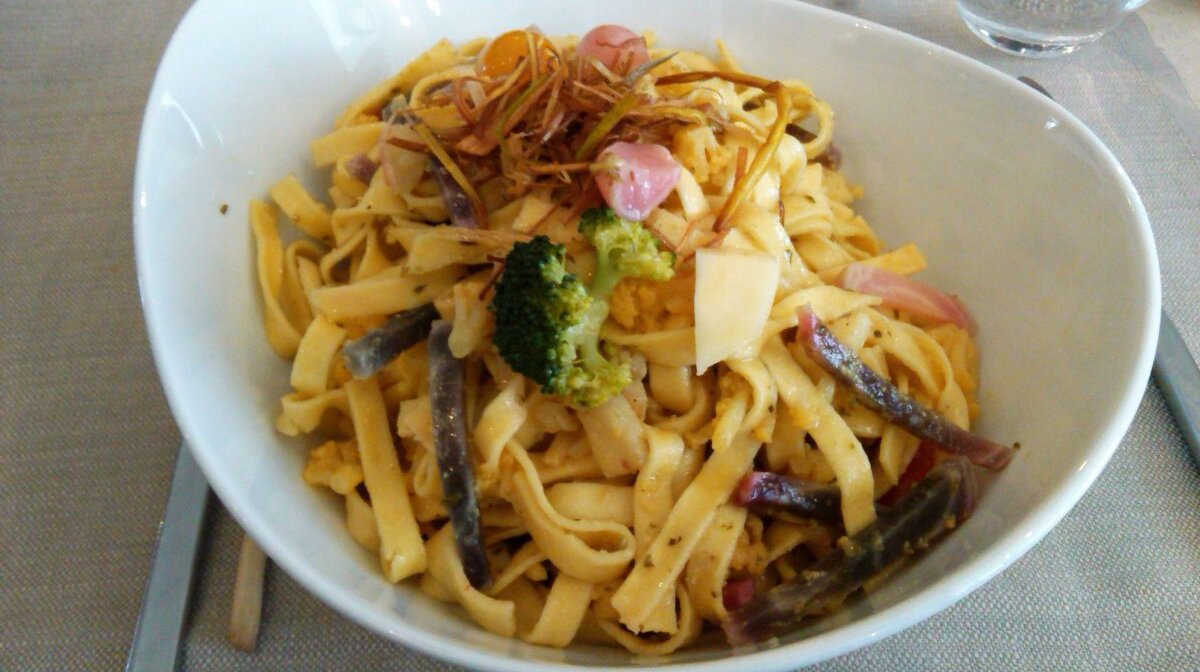 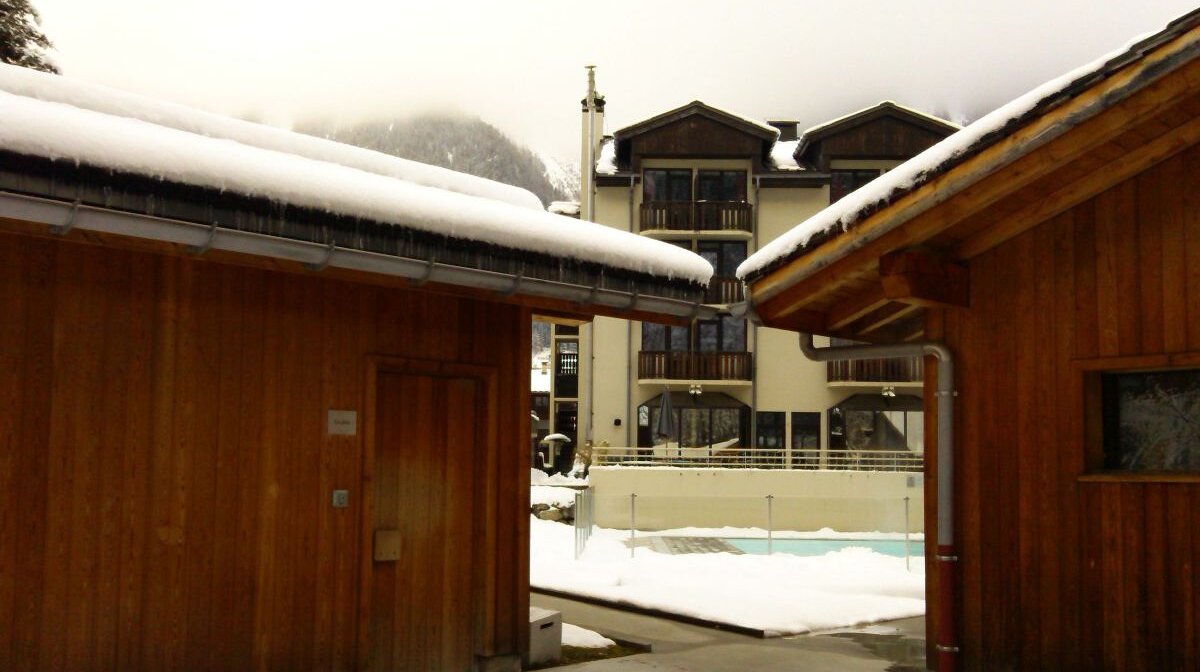 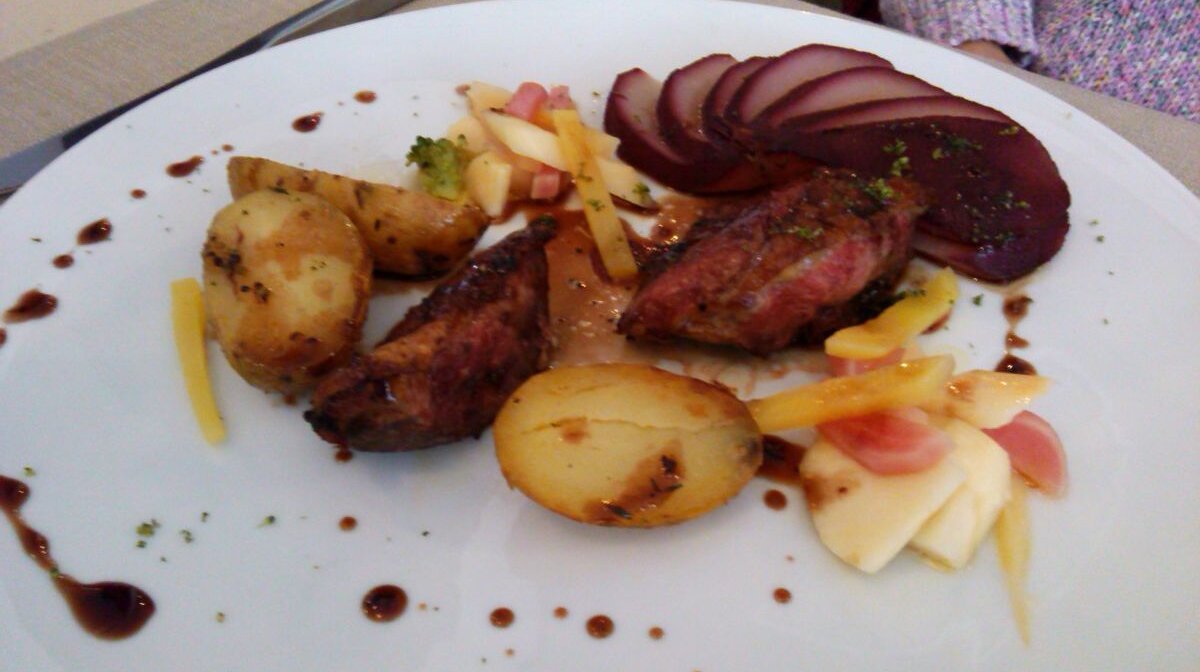 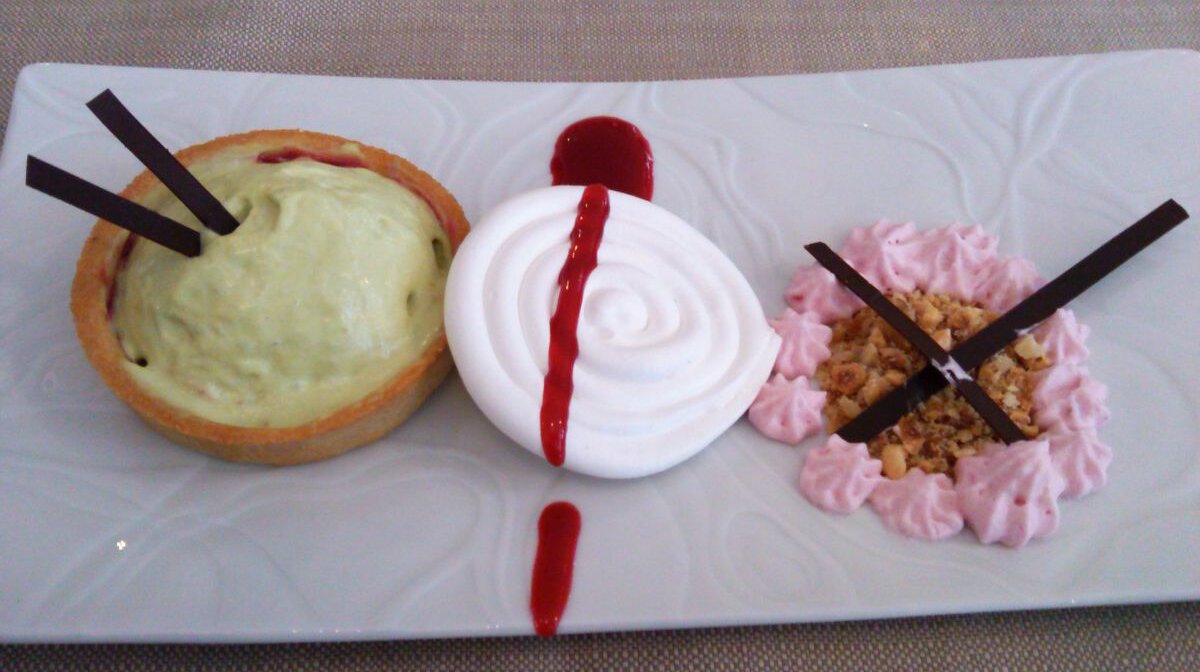 Now that the ski season has started, we’ll be spending every spare moment on the mountain.

Arriving at midday, we were shown into the elegant restaurant area and offered the lunchtime set menu. For 25.50€ you can choose from two courses  and then head over to the pool and spa area afterwards for a pleasantly indulgent afternoon.

The menu is limited to two choices per course and, this being France, the choices were either meat or fish. Having a vegetarian and a vegan in our group, we tentatively enquired if the chef would be able to rustle something up, and we were told it would be no problem at all.

The meat-eaters on the table were able to choose from chicken soup or goat cheese salad to start, and either duck breast or salmon steak for the main course. For dessert there was either a cheese board or pistachio and raspberry tartelette.

The desserts were tempting enough to ensure that only one starter was ordered - the goat’s cheese salad, which was pretty big for a starter, with large chunks of hot goat’s cheese oozing over toasted baguette and a crisp mixed salad with honey dressing. The vegan starter was a pumpkin soup, which was nice with a delicate sweet flavour, but was more of a thin broth.

By the time the main courses arrived we decided it was definitely late enough in the day to be allowed a glass of wine and we ordered a very nice bottle of Savoyard white to accompany our meal. Between the five of us, we managed to sample all three options - the duck, the salmon and the veggie option. The duck and salmon dishes were beautifully presented and accompanied by a selection of sautéed vegetables. The duck came with a rather fancy poached pear and a rich red wine sauce, while the salmon was dressed in a light and tasty dill butter sauce. The suggestion of vegetable pasta for the non-meat eaters sounded rather uninspiring but when it came, it was a happy surprise packed with loads of delicious vegetables in a rainbow of colours.

It was nice to see that all of the dishes featured local seasonal vegetables such as turnip and cauliflower cooked perfectly to bring out the best in them, rather than more “glamorous” vegetables that have probably been grown in a greenhouse and transported a long way to reach our snowy corner of the world. The only criticism was that a couple more of the delicious roasted spuds would have been welcomed alongside the salmon.

Those that had opted for dessert were presented with the highlight of the meal - a trio of fancies that were nothing like the traditional fruit tart we were expecting. It turned out that that the pistachios and raspberries had been reworked into an artistic selection of creamy and crumbly treats with tart and sweet contrasting flavours.

Once we’d polished off as much as we could manage we went downstairs to the spa, where we were given towels, robes, slippers and locker keys. The swimming pool is surrounded by snow at the moment, which prompted lots of gasps and squeals as we stepped out into the cold but the hot jets of the adjoining jacuzzi soon sorted that out and, in fact, it’s a lot nicer to bubble away when you have cool fresh air on your face. From there it is a short dash to the two wooden chalets that house the sauna and the steam room - both infused with a different blend of scented oils each day. The next couple of hours were spent catching up on the gossip in a cocoon of heat and steam - better therapy than any massage!

The lunch and spa package at Hotel les Aiglons costs 25.50€ for a two course lunch and two hours in the spa; they also offer breakfast and spa for 22.50€ from 6:30am until 10am, and a snack and spa for 19.50€ from 2pm to 5pm. A premium option allows you to add extras such as massages and beauty treatments - the packages can also be bought as a gift voucher if you’d like to treat someone.