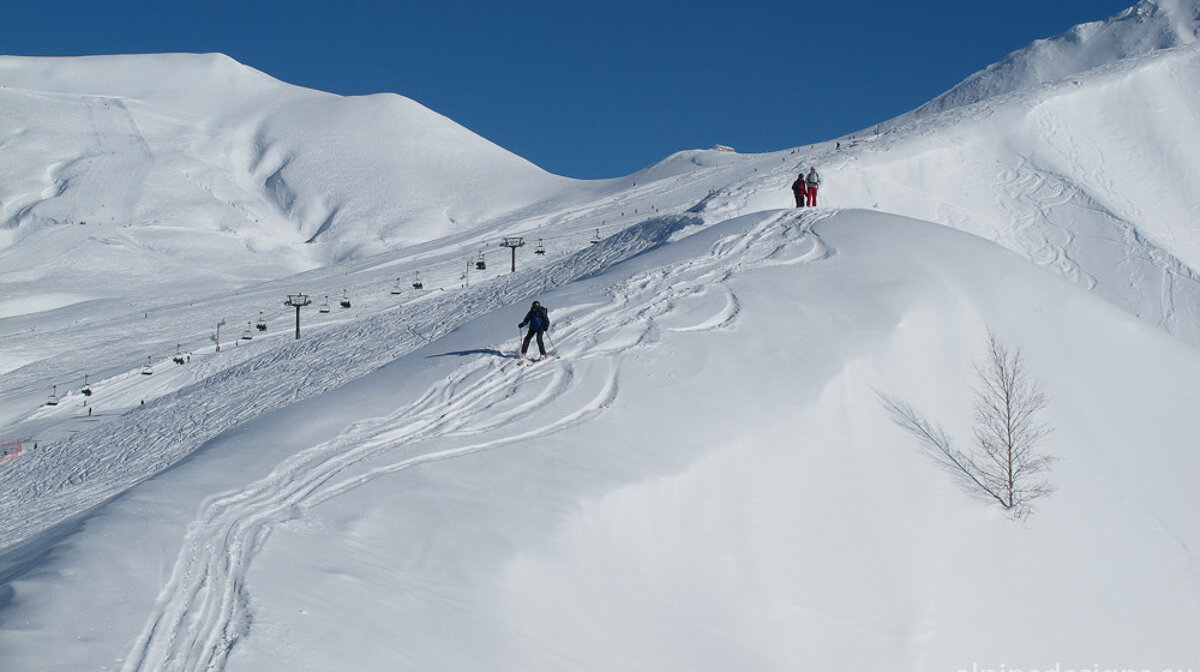 In spite of being one of the lower altitude and less steep areas in Chamonix, the area of Le Tour in the Domaine de Balme has some of the best off-piste in the valley and excellent little stashes of powder when most the obvious places are tracked out.

The geology of Le Tour is very different from that of the rest of the valley. It is far less rocky, and in the summer there are meadows filled with grazing cows here. At the start of the winter season it doesn’t need masses of snow to make the off-piste good. The front side (in between the pistes that fan out from the Autannes chair) is gentle and great for getting a feel for making your first turns off-piste. You are never too far from the piste and the many gullies here are fun to play in, and it’s hard to get lost too as you always end up back at the Charamillon lift station. Here are a few of our favourite off-piste routes.

Route 1 : Combes de la Vormaine Another easily accessible area with no hiking needed is the much steeper part of Le Tour called the Combes de La Vormaine. Staying on the front side by traversing skier’s left around the bowl from the Autannes chair you arrive at the top of the Combes de la Vormaine (it’s just out of sight of the lifts and pistes so chances are it’ll be fairly untracked too). From the chairlift we follow the Chatelet track on the skiers left to the top of the chutes from which we can take our pick to drop into. These steep chutes have several different aspects with gradients that vary between 35 and 45 degrees. They funnel into a valley that leads to the beginner’s area of La Vormaine so don’t attempt them unless you're confident in your ability to ride slopes of this gradient. These chutes are often loaded with snow in the form of cornices and wind lips all the way down, which are great for riding up and pulling powdery turns but its important to remain vigilant.

Route 2a : Aiguille des Posettes Take the Aiguillette draglift up and then head out skier’s right, away from the pistes staying high below the ridge. This leads to the slopes above the car park at Le Tour. When you reach the avalanche barriers (yes, these slopes are avalanche prone) start to descend towards Le Tour. The slopes are a good pitch here without being too steep, and scattered trees and bushes keep things interesting. You can either head into the trees below to pick up the trail that zigzags down, or head skier’s left into the more open section. When you are just above the river follow the riverbank down to the car park and bus stop. It’s a good run to do at the end of the day, unless it’s hot, which can cause these sunny slopes to become very unstable.

Route 2b : Aiguillette des Posettes From the Aiguillette des Posettes you can take a three-minute climb over the top of the Aiguillette and descend down to Vallorcine. There are plenty of routes down but plenty of cliffs too, so have a look at the mountain from below first. The most-frequented route is the Posettes couloir, which is wide, open and reasonably steep. The snow here is often good but since the Vallorcine gondola was built it’s a little harder to find completely fresh tracks. Be wary of heading too far skier’s right, as this is where the worst of the cliffs are. By heading almost straight down you should get some good lines through the trees and shrubs and the slopes are shaded and the snow often excellent. At the bottom head right to either the train station if you want to head back to Chamonix, or take the gondola to get back into the lift system.

Route 2c : Aiguillette des Posettes From the top of the Aiguillette draglift take a ride down the ridge skier’s left. Just dropping over the back of the ridge toward Vallorcine, being a little careful not to drop down too far as it means a walk back up. This opens up some superb terrain with rolling drops, scattered trees and little cornices (the zone below is an animal wintering zone). The area’s not particularly steep but is great fun nonetheless. There are also some good spots here. Traverse towards the top of the Vallorcine gondola and try not to drop below the Esserts Variant piste as the hike back isn’t much fun.

Route 3 : Le Tour/Vallorcine A short hike to the top of the Tete de Balme from the chairlift of the same name opens up a lot of off-piste terrain at the back of Le Tour above Vallorcine. However, this can be a dangerous area for avalanches so take care. The back bowls here are often wind-loaded, with large cornices looming above the slopes: they may look great but can be deadly as there are several terrain traps here where you could potentially be buried under metres of snow. If you want to explore these areas, then take a local mountain guide and be prepared for all risks.

If you don’t want to do the hike to the top of the Tete de Balme, you can access some of the same terrain by heading down the Esserts black run and then traversing skier’s right. You miss out on some good stuff at the top but still get some superb riding through the trees. The woods here are worth exploring, as there are plenty of unexpected clearings and fun drops. The terrain undulates here and there’s always something fun around the corner. As we mentioned above, don’t forget to traverse back to the bottom of the chairlift.

The routes mentioned here are just the tip of the Le Tour iceberg, there are many, many more possibilities to explore in this area.