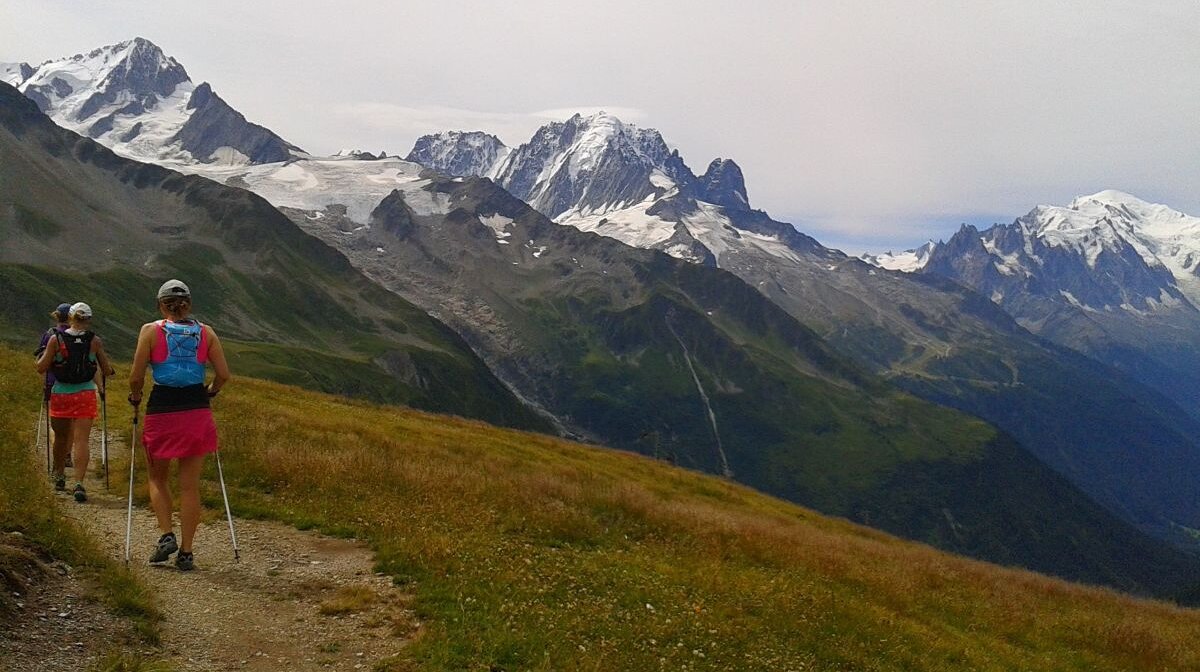 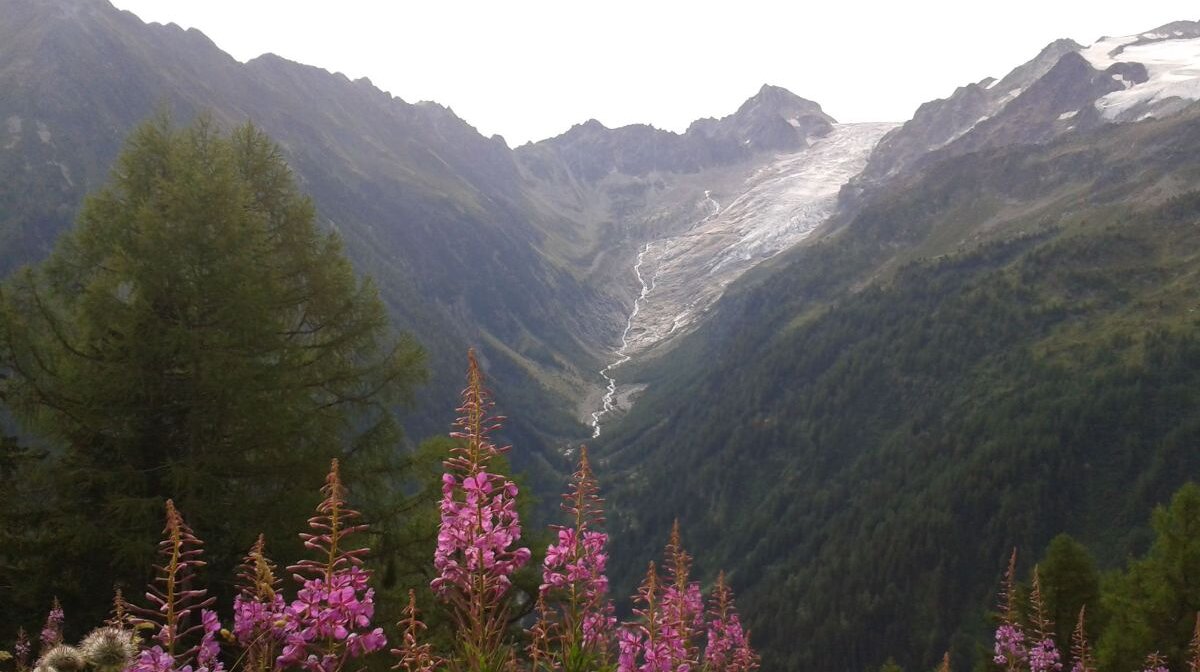 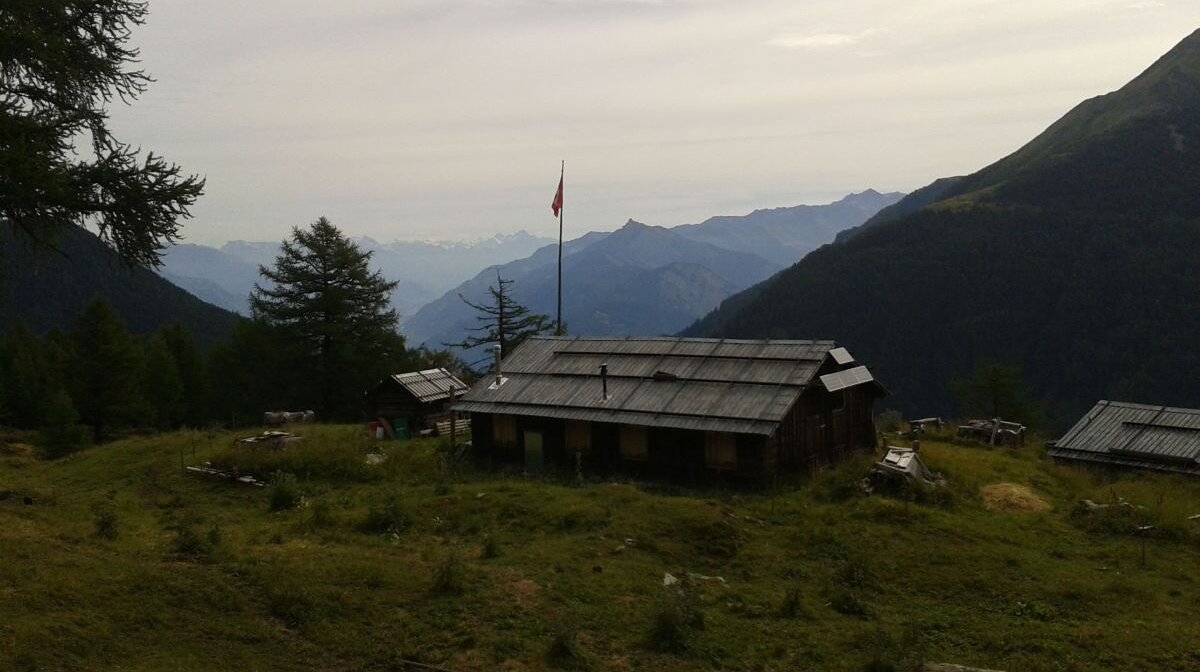 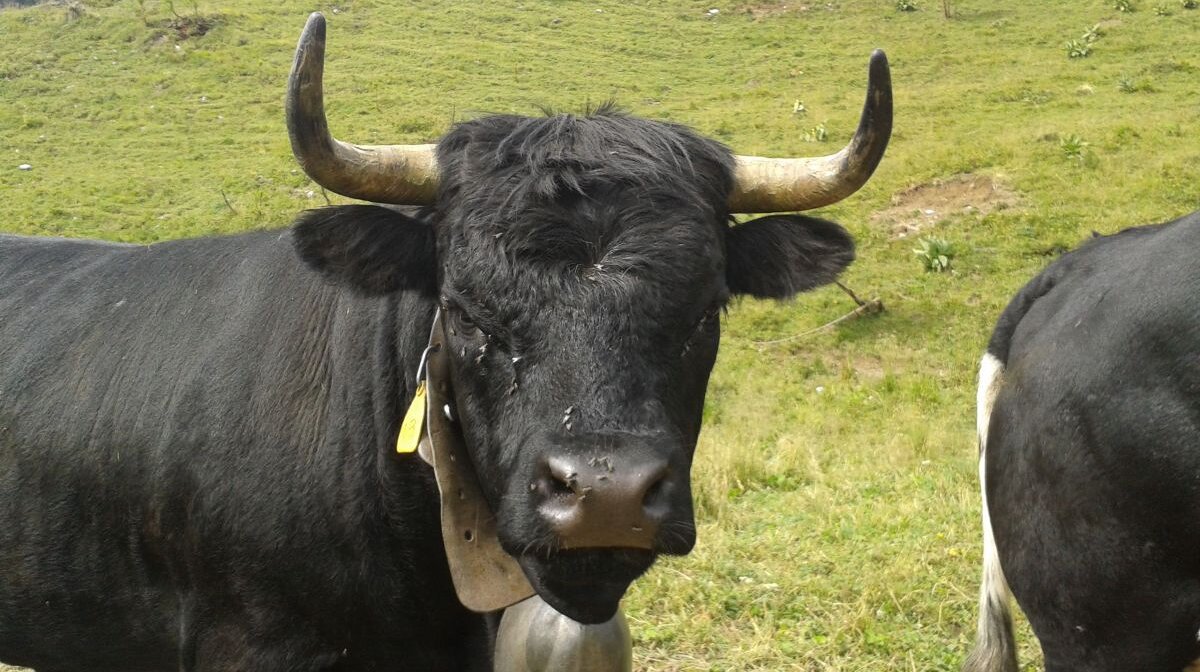 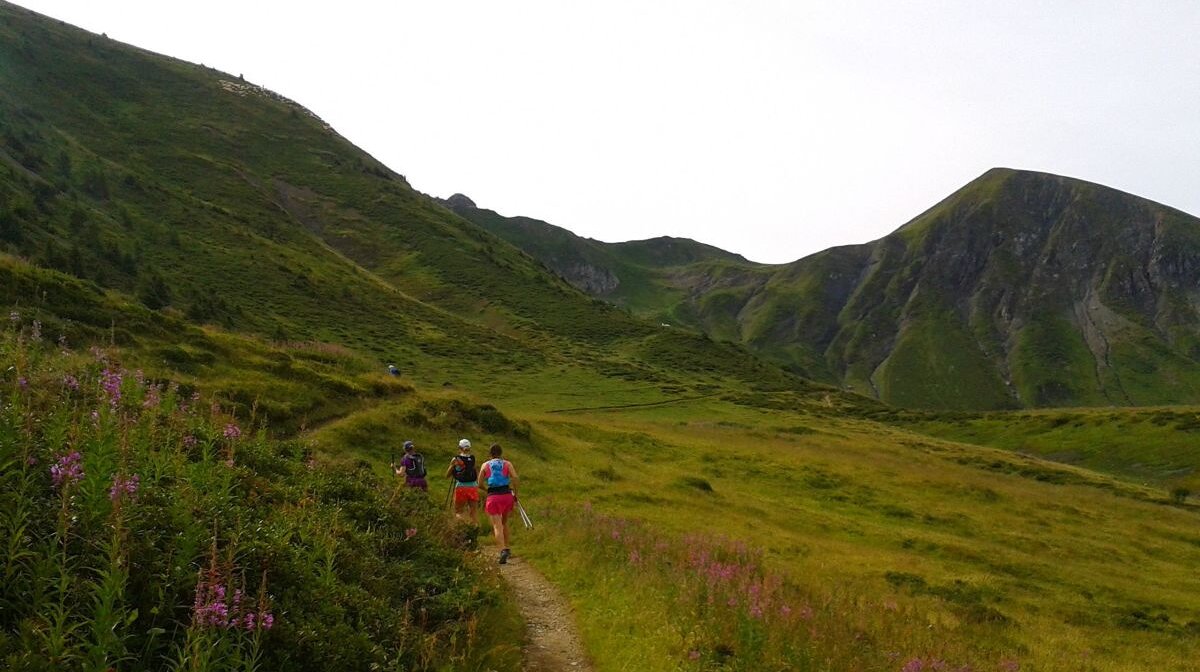 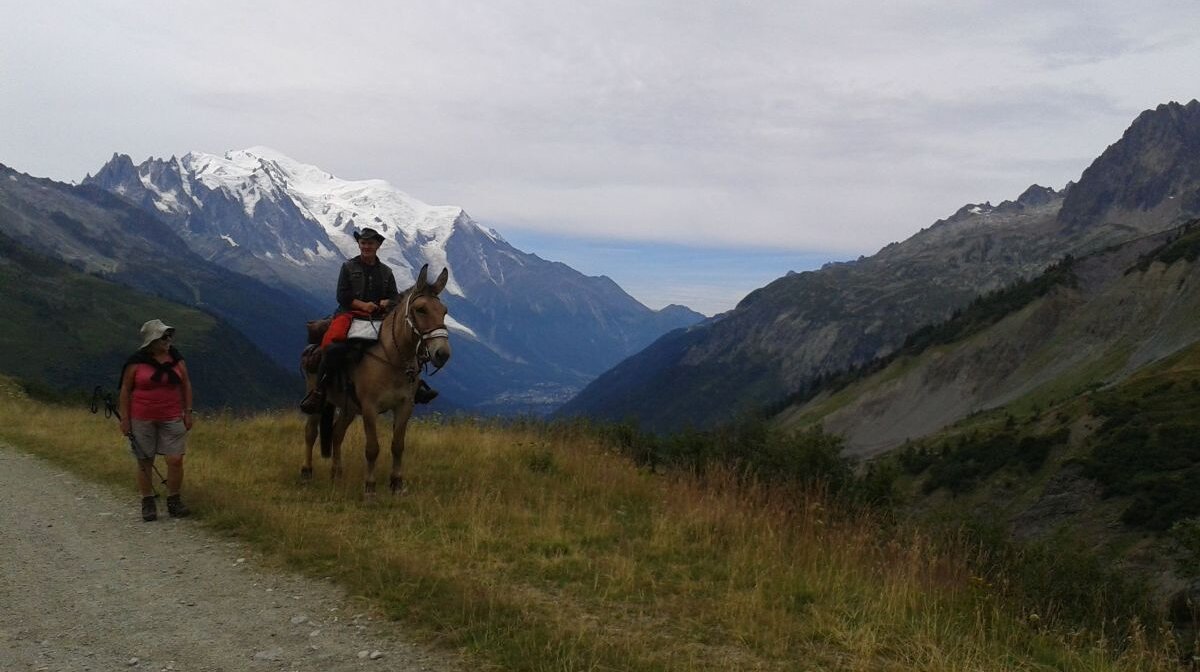 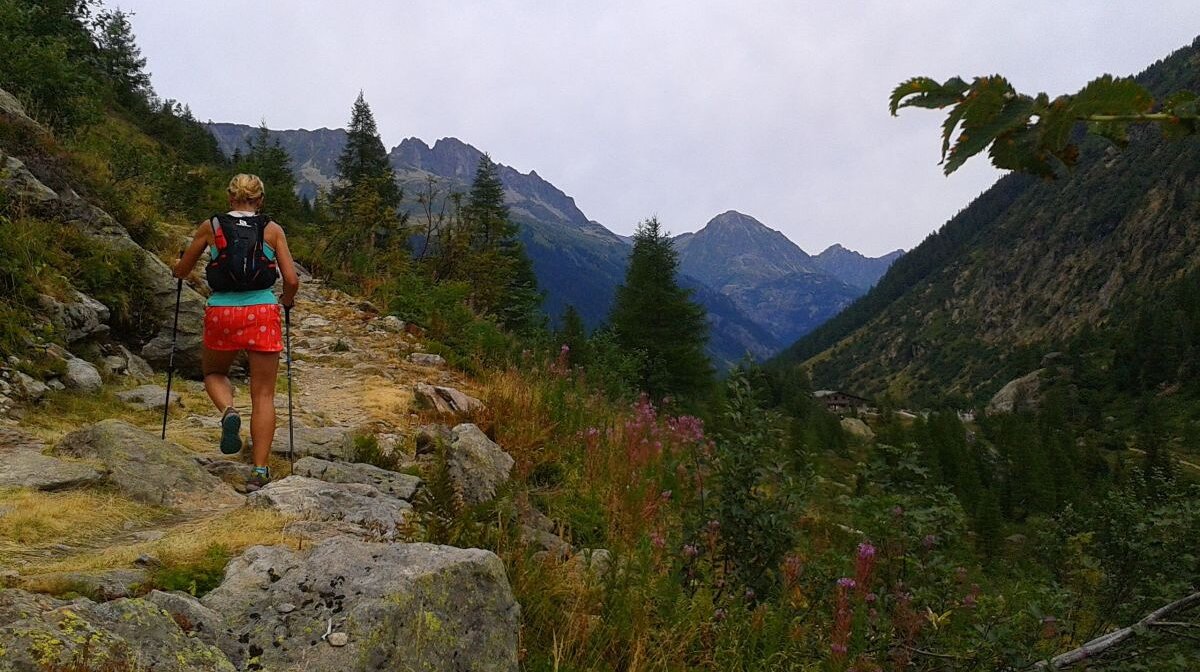 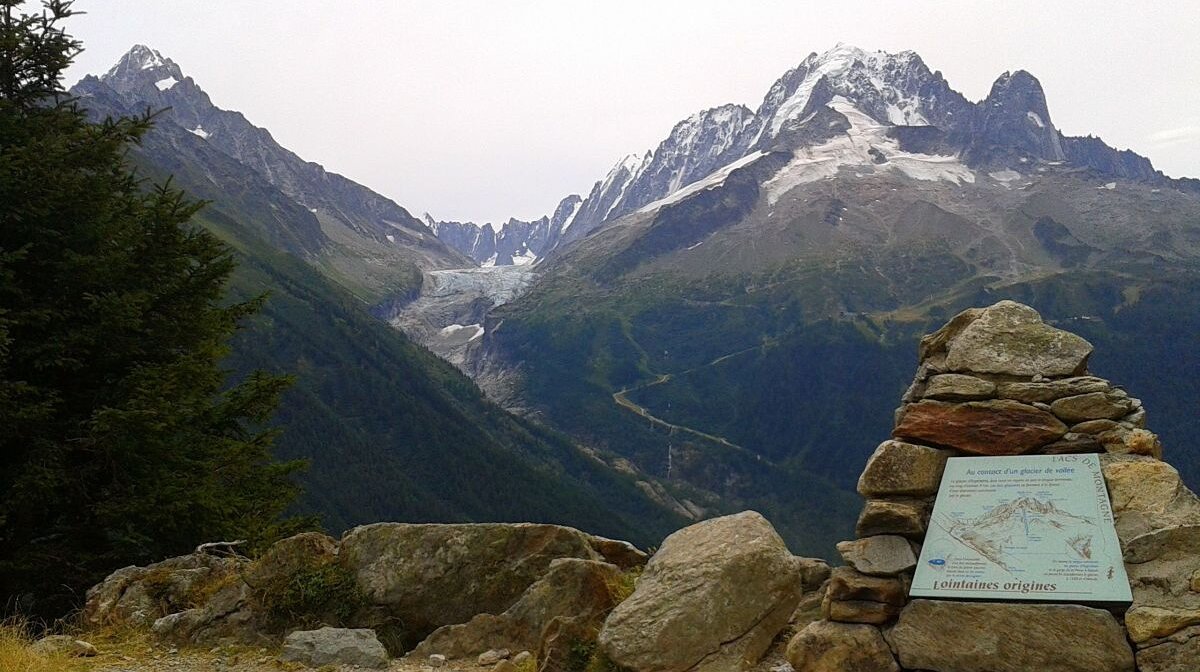 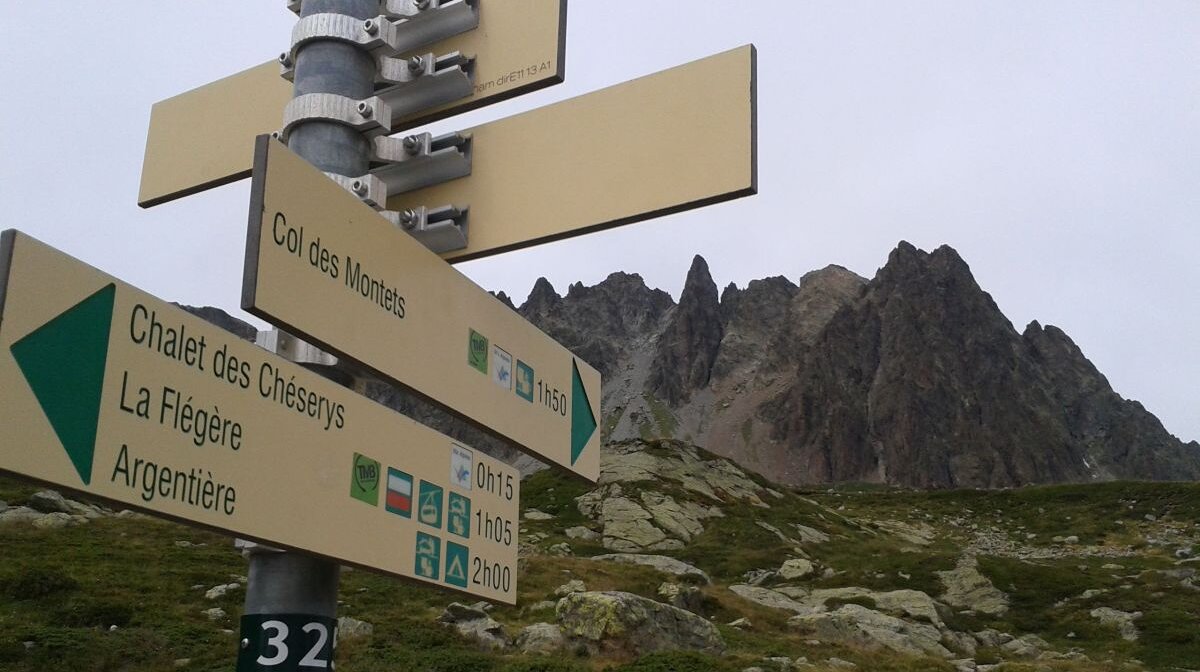 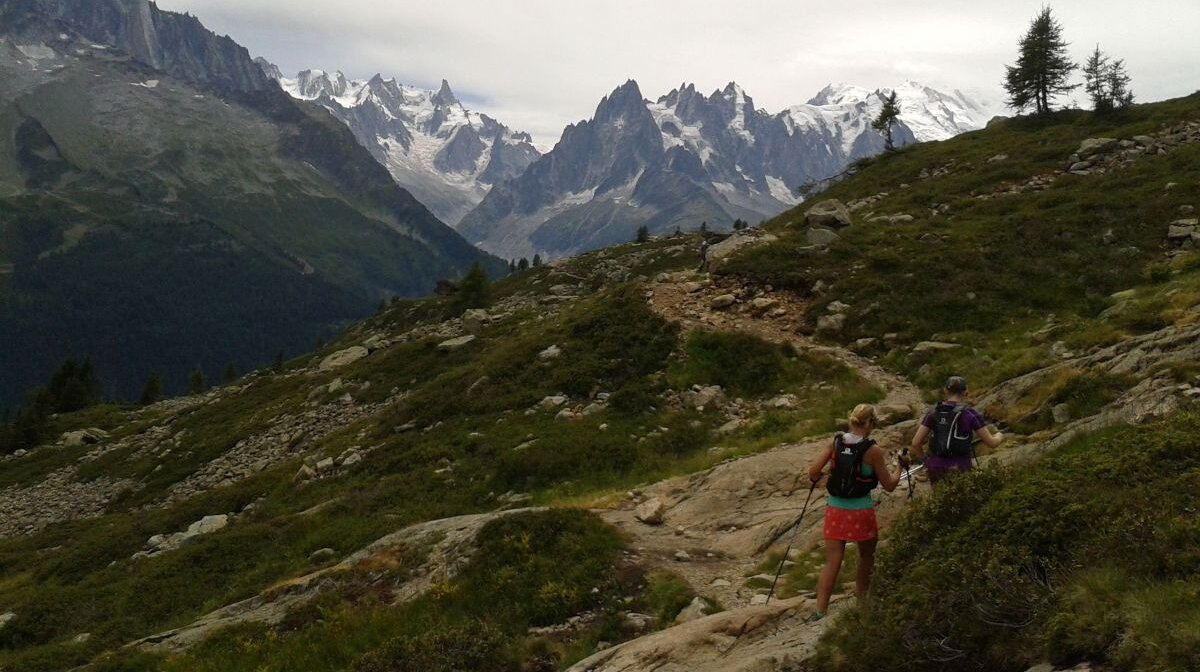 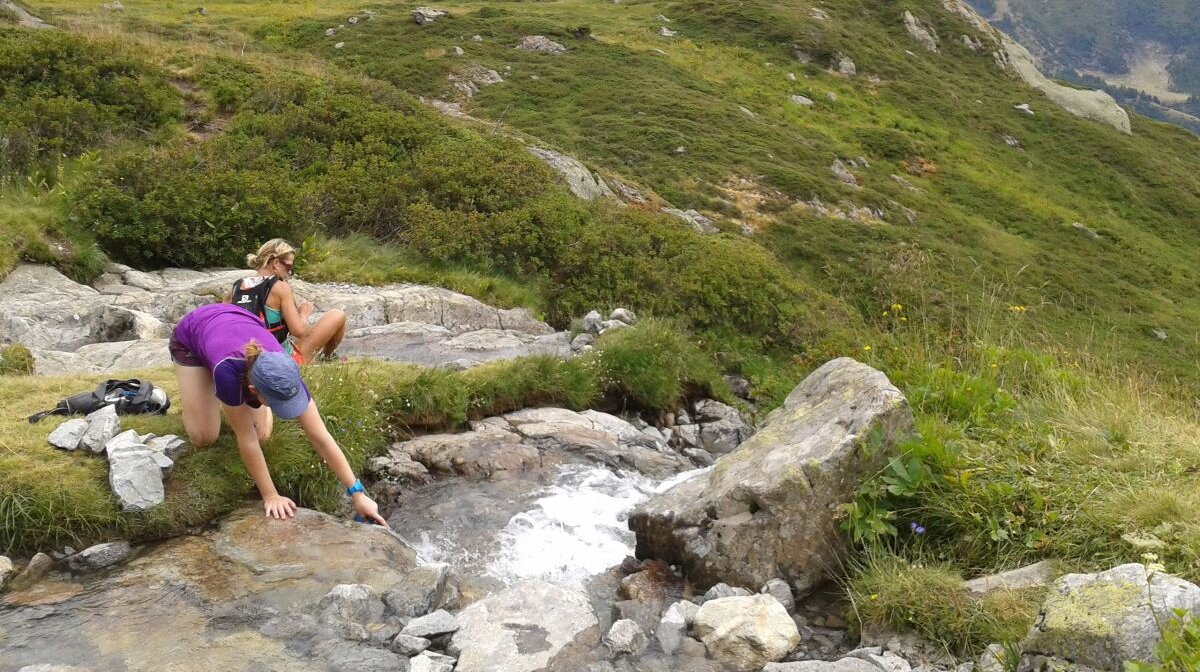 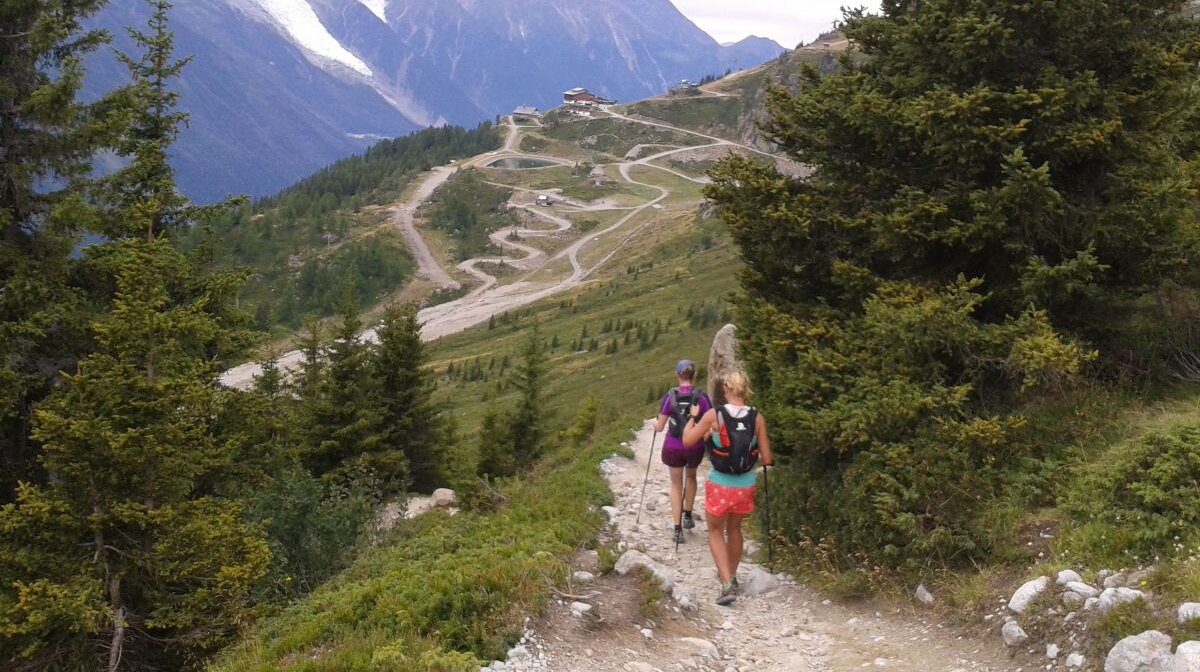 Looking across Trient to the glacier

Possibly not a morning person

Sharing the trail with a friendly mule at Le Tour

Making our way up to Flegere

Filling up water bottles and cooling our feet at Flegere

Having had the Tour du Mont Blanc on my "to-do" list for many years, I jumped at the chance of doing one of the last sections this week as a day hike starting in Trient and finishing up at La Flegere.

The full circuit starts in Les Houches and heads out of France via Les Contamines, into Italy and through Courmayeur, into Switzerland and over the Col de Forclaz, and back into France following the route that we took just a few days ago.

We were lucky enough to have a friend drop us off in Trient early in the morning, otherwise you can catch the train to Chatelard and then pick up a bus to Trient (check with the Trient tourist office for bus schedules as they change throughout the year).

Our day started bright and early outside the Relais du Mont Blanc in Trient, from where we headed north for just a few metres and picked up the signposted path to Catogne. The route starts on a fairly wide and well-maintained 4x4 track, which gently ascends above the village. After a few hundred metres the trail branched off to the left and became significantly steeper as it turned into a narrow footpath, edged with brambles and meadow flowers.

As the sun rose and we got higher amongst the mountains, the views became ever more beautiful and we could see across to the Trient glacier on the other side of the valley. After a fairly stiff climb we found ourselves at Les Tseppes 1932m, with a few pensive cows and a charming old farmhouse perched in splendid isolation on a plateau.

We followed the signpost and pressed on to the Col de Balme; from here it was a fairly level traverse, following the red and white trail markers - don't expect loads of signposts once you get away from the main areas, but if you keep your eyes open for coloured tags or paint splodges on rocks you'll be fine.

Our path took us on an idyllic rolling ramble across gurgling streams, past trickling waterfalls and over crooked little bridges - the views were fantastic and we could see across to the Emosson Dam and down to the small villages scattered along the French/Swiss border.

Rather than drop down to the village of Vallorcine, we stayed high and crossed over the Col de Balme to Le Tour; this is one of my favourite areas in summer with wide open meadows that feel almost like moors, interlaced with little streams and carpeted with a thick scrub of heather, wild flowers and berries. We freewheeled down the wide hiking paths to the top of the Charmillon cable car and then picked our way down the narrow switchbacks of the home run, hopping aside to let past the occasional mule.

Crossing the car park diagonally to the right, you'll see a trail heading up into the forest and a signpost for the Col des Montets. It starts off quite gently and is my favourite kind of running terrain - springy pine needles and knobbly tree roots! It soon gets steep again though and you'll find yourself gaining altitude via a section of tight switchbacks. Once the trail has spat you out onto the Col des Montets, cross over the road and look to your right for the path leading up to La Flegere.

From here it is onwards and upwards towards the top of the cable car, via Les Cheserys and Tête aux Vents. There are a number of viewpoints along the way with orientation boards giving you all sorts of information about what altitude you're at, what mountains you can see, what wildlife is in the area and so on. I think the scenery up here is amongst the most impressive in the valley; looking ahead of you is the massif du Mont Blanc, across are the jagged peaks of Le Drus and Aiguille Verte, back over your shoulder are the rugged rocks of the Aiguille Rouges leading into the distance with Le Tour and the Swiss mountains beyond, and all along the way is a handful of glaciers tucked in between the mountains.

The scrub up here is thick with myrtilles (blueberries) right now and we picked a few to snack on along the way; we also stopped to dunk our tired legs into an ice-cold stream - refreshing but far too cold for anything other than a quick splash! The finally climb up to La Flegere is an interesting mix of steep switchbacks, undulating singletrack and scrambling across rocky gullies that seems to stretch out forever; it takes about 2-3 hours from the Col des Montets and you don't see the lift station until you're nearly there.

We got to the lift station tired but happy as the first rain drops were starting to fall. If we were to continue the Tour du Mont Blanc all the way to the end we would have carried on along the Grand Balcon Sud to Brevent and then followed the Aiguillette des Houches, a stunningly beautiful ridge walk that takes you back down to the starting point at Les Houches. Our little jaunt was more than enough for one day though - just over 20km with just under 1900m of elevation gain, which we did as a run/hike/scramble taking around 5 hours. You can plan your own adventure, and even book overnight stays in mountain refuges, on the official Tour du Mont Blanc website.